The Arab Spring: A Year Later 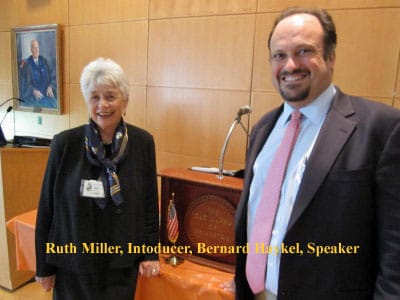 Ruth Miller introduced the speaker, Professor Bernard Haykel, with what Professor Haykel described as the most elegant introduction he has received in his professional career.  Professor Haykel is Professor of Near Eastern Studies and director of the Institute for the Transregional Study of the Contemporary Middle East, North Africa, and Central Asia at Princeton University. He was born in Beirut, educated at Georgetown and Oxford, and was at NYU prior to coming to Princeton in 2007.  His major research has been on Salafis, a puritanical ultraconsertive sect that calls on modern-day Muslims to live and practice as their ancestors did during Muhammad’s lifetime.  The topic of Professor Haykel’s talk was “The Arab Spring: A Year Later.” It might have been subtitled: “The Journey From Euphoria to Dysphoria.”

Professor Haykel described his feelings of euphoria at the initial events of the Arab Spring, feeling, like most Arabs, a euphoria that led to nights without sleep and illness due to a related weakening of his immune system. Since then he has been beset with despondency, pessimism, and cynicism.  Confused about whether the Arab Spring is more about economic issues (i.e., poverty and the rise in commodity prices) or movements genuinely seeking democratic reforms, he indicated that Arab regimes are difficult to bring down, and Tunisia and Egypt may be exceptions rather than the rule.  And, even in Egypt a real revolution has not yet happened, despite a parliamentary representation of roughly 75 percent Islamists, since there has been a toppling of leaders but not of the regime.

Syria he described as involving a regime engaged in a zero-sum battle with its people, with an Alawite minority fearing that if the regime is toppled they would be losers to the majority Sunnis.  The Alawite-led regime uses military and other key institutions to maintain power. For example, military leaders are Alawite, only Alawites are allowed to fly military planes, and Sunnis are used as cannon fodder in battles.  He is distressed and depressed about Syria because the regime can not be toppled without outside intervention and, even if toppled, it is not clear what would come next, perhaps the replacement of one dictator by another rather than the democracy hoped for.

Libya he described as a country of city states fighting each other. Saudi Arabia he described as willing to spend money, through salary increases and other benefits, to coopt the population and suck the air out of the opposition. In addition, it ramped up the ideological spin by portraying the opposition as coming from Shiites and Iran, and spent money on countries such as Bahrain, Oman, Yemen, and Jordan in a foreign policy described as “very good at writing checks.”

Bahrain was described as a vassal state of Saudi Arabia with a corrupt royal family analogous to a Mafia don. Yemen was described as a country on the verge of becoming a failed state with a high fertility rate and running out of natural resources and ground water. With guns omnipresent, he described the NRA as a joke compared to Yemen, a country on the verge of becoming another Somalia.

Throughout the region there are the problems of a very high fertility rate, a youth bulge where 60 percent of the population is under age 30, and the political systems are not producing the needed jobs. This leads to a nihilism in politics, as in Al Queda, which is small in numbers, or as in the person in Tunisia who burned himself. What is the solution – “I don’t know.”

A sampling of answers to member questions indicated that he felt that women were a weak link in Arab societies, that the Arab Spring had nothing to do with Israel and what unites Arabs is a distaste and hatred for the brutal and corrupt way in which they are being ruled, that there is a dislike for US support of Arab regimes that do not govern well but admiration for US culture, that Lebanon is not a country he would bank on in the long run, and, finally, that the reaction to an attack on Iran would depend on who was doing the attacking and what unfolded afterwards, with most people in the Middle East worried more about daily survival than the big picture.

The minutes can perhaps be best summarized with an early quote of Professor Haykel: “In case any of you are wondering, I’m a pretty pessimistic person.” as well as a later one: “My cynicism and pessimism are rooted in events following World War II, with pessimistic predictions at the time proving to be accurate.  Egypt in 1950 was ahead of South Korea and look at what has happened.  I think I have cause for pessimism.”