​Two-time Pulitzer Prize winner and writer of the
“About New York” column for The New York Times,
​Visiting Professor of Journalism, Princeton 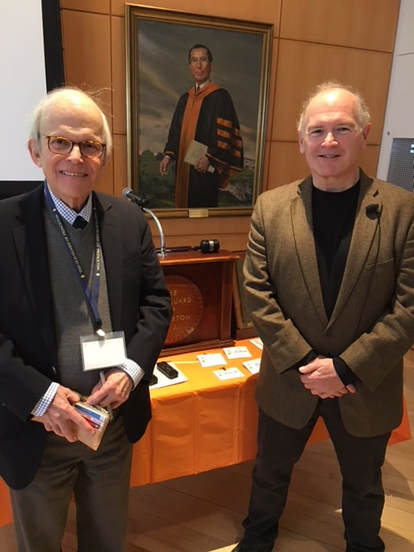 
Landon Jones introduced our speaker, Jim Dwyer, who addressed us on the topic of New Amsterdam, New York City: Objects, Imagination, History. Mr. Dwyer is a longtime New York Times staffer, two-time Pulitzer Prize winner, visiting professor of journalism at Princeton and, most pertinently to the theme of his talk, a lifelong denizen of the Big Apple who is, perhaps, best known for his “About New York” column in The Times. In lieu of recapping his bio in more detail, let it suffice to cite a March 2016 article in The Columbia Journalism Review, which bears the title: “The best job in journalism? Sorry, it’s already filled by Jim Dwyer.”

Mr. Dwyer’s talk was billed in advance as “400 years of New York history in 40 minutes,” a rhetorical pace that he acknowledged might prove challenging to the designated minute taker -- a moment of empathy twixt speaker and scribe perhaps unprecedented in the annals Old Guard memory and much appreciated by yours truly. Our speaker’s presentation, both in style and substance, married a researcher’s affection for historical detail and the illuminating anecdote with the streetwise humor and lingo of a hardened, city-beat reporter -- for example, when he referred to Peter Stuyvesant, a severe Calvinist intolerant of other denominations, as not wanting to “take any lip” from the New Amsterdam settlers who, in their 1657 Flushing Remonstrance, had admonished him that Jews, Turks and Egyptians who “come in love unto us” should be welcomed as “…fellow sons of Adam.”

Our progression through the centuries began in a virgin forest, circa 1624, just before a Dutch cargo ship disembarked for the first time -- a sylvan setting that Mr. Dwyer touted as having been more ecologically diverse than a coral reef, a tropical rain forest or, for that matter, Yosemite or Yellowstone.

It was about this time that the Dutchman, Pieter Schagen, arrived and notoriously bargained with the native Lenape Indians for Manhattan Island in exchange for 60 guilders worth of trinkets, while later departing with a cargo of beaver and other animal pelts valued at 45,000 guilders. Mr. Dwyer then recounted how the Quakers (who, of all people, were castigated by Stuyvesant as “spiritual seducers”) proved to be on the right side of history. After the Portuguese expelled the Dutch from Brazil, sixteen boatloads of Sephardic Jewish refugees arrived in New Amsterdam with the blessing of the Dutch West Indies Company over Stuyvesant’s objections -- and presaging New York’s evolution as perhaps the most tolerant and diverse of colonial American cities. That said, the memory of Stuyvesant (he of the silver-nail-studded wooden prosthesis), lives on in place and name, including the nickname, the “Peglegs,” emblazoned on the jerseys of the Stuyvesant High football team. Shearith Israel, the synagogue founded by these new arrivals still stands in New York, as does the 1689 Quaker Meeting House, which, as Mr. Dwyer noted, “is still meeting and still friendly.”

As Winston Churchill famously remarked: “History is written by the victors.” The British seized New Amsterdam from the Dutch in 1664, and promptly inscribed that year as the founding date on the freshly, renamed city’s official seal. Several centuries later, Paul O’Dwyer, a post-World War II City Council chairman born in County Mayo, Ireland, and no friend of the redcoats, reset the clock by replacing 1664 as the founding date on the seal with the 1625 year on which the Dutch first settled there.

Mr. Dwyer next touched on two aspects of New York’s infrastructure, water supply and public transportation, which over the first half of the 19th century proved increasingly problematic threats to the city’s growth.  And he did so through the contributions of three men, one, Aaron Burr, a household name, and two other figures, John Jervis and Alfred Beach, both now resting in near total, if undeserved, obscurity.

Up until about 1820, the city drew its water from the spring fed, 48-acre Collect Pond, 60 feet deep, which when later filled in, housed the Five Points slum, now familiar as the setting for Martin Scorsese’s “Gangs of New York.” But by the time of American independence (in an acting out of Garrett Hardin’s “Tragedy of the Commons”), the pond had become foully polluted from nearby tanneries, breweries and slaughterhouses.

After a yellow-fever epidemic, Aaron Burr was perhaps the first to perceive these pestilential conditions as a business opportunity -- albeit acting on ulterior motives that had nothing to do with selling potable water and everything to do with sticking it to Alexander Hamilton. Burr chartered the Manhattan Water Company, raised the equivalent of $2 million (a tidy sum in 1800 currency). The small print of the company’s charter allowed him to invest any surplus funds as he saw fit. After investing a mere $100,000 in frivolous water projects, he used the remaining $1.8 million to operate the Water Company as a de facto private lending institution in competition with Hamilton’s National Bank. Since then, this enterprise has metamorphosed into today’s JP Morgan Chase Bank, whose headquarters now displays Manhattan Water Company memorabilia in its lobby.

Several decades later, John Jervis, inventor of the first locomotive and a canal builder, conceived a scheme to bring water from upstate. Completed by 1840, the Croton Aqueduct, an engineering marvel of its day, brought water from over 40 miles away, all gravity propelled along a mere 13 inches of slope per mile, crossing the elegantly arched High Bridge across the Harlem River (recently rediscovered and converted to a pedestrian walk), and culminating in Lower Manhattan, where it supported a 50 foot head of water.

Turning to mid-19th century public transportation, Mr. Dwyer depicted a system dependent on a resident population of over 150,000 horses, each depositing 22 pounds of manure a day, which, if I’m applying the correct, as it were, “excremental equation,” translated into a waste-disposal challenge of well over a billion pounds a year. In 1869 Alfred Ely Beach, the owner of Scientific American, began the first attempt to build an underground transit system, albeit surreptitiously,
under the nose of Boss Tweed, whose Tammany Hall cronies monopolized the horse-drawn omnibuses. Expanding on a permit for a 12” diameter pneumatic tube for package deliveries, Beach built an improbable but fully operational prototype consisting of a 12-foot-diameter tube through which a passenger capsule was propelled by giant fans. Riders embarked from an elegant waiting room replete with statuary, a grand piano and finely upholstered sofas.

Mr. Dwyer suggests that it was the public-spirited and visionary entrepreneurship of men like Jervis and Beach that made possible the boom times that followed in the latter half of the century.

Leapfrogging ahead to the present day, Mr. Dwyer shared with us several New York site visits by his Princeton journalism class: to a Bronx housing court that handles a mind-boggling 2,000 cases daily; to a pump room, five stories underground, for a segment of the Second Avenue Subway constructed way back in the mid-seventies, a project still in progress today, 40 years later, an example of fast-track construction on the order of a medieval cathedral. Mr. Dwyer also recounted a dramatic escape by window washers that was excerpted from his recent book, entitled “102 Minutes: The Untold Story of the Fight to Survive Inside the Twin Towers.” Interestingly, in his perception, the terrorist attack has had no durable impact on the psyche of the city.

As a coda to his presentation, Mr. Dwyer showed us a video, which, in literally one minute, compresses an accelerated, year-by-year, time-lapsed representation of Manhattan’s development from 1500 to the present, as an elevator ascends 1 World Trade Center. For those who would like to revisit the video, here’s the link:
https://www.nytimes.com/video/nyregion/100000003637210/sky-pods-show-rise-of-new-york-skyline.html?smid=pl-share

In conclusion, I imagine that Mr. Dwyer’s topic no doubt resonated most profoundly with those members of the Old Guard who have sadly relinquished fantasies (or perhaps still cherish them) of the perfect pied-á-terre in Chelsea or just off Central Park West, or with those whose family’s oral traditions (such as mine) contain no doubt apocryphal anecdotes of a great-grandfather who passed up the chance to purchase land at what today is Broadway and West 34th street because no one would ever build that far north of the Bowery

One final postscript: In responding to a question from the audience, Mr. Dwyer mentioned having recently taken his students to a New York Water Authority facility in Westchester where impressive volumes of water are treated by ultraviolet light to zap a certain nasty bug on the EPA’s most wanted list. When he struggled to be more entomologically precise than just “nasty bug,” someone helpfully shouted out from the back of the room: cryptosporidium, vocal testimony, if it was ever needed, to the depth and breadth of our Old Guard bench.