Getting to Zero: What Will It Take to Decarbonize Electricity? 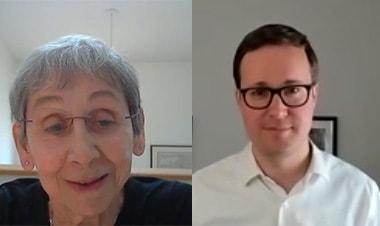 Marge D'Amico, Introducer, and Jesse Jenkins
Minutes of the 28th Meeting of the 79th Year
President Stephen Schreiber called the meeting to order at 10:15 AM. Jock McFarlane read the minutes of the April 7th meeting. Guests included Dina Robinson, guest (and prospective new member) of Reba Orzag; Judy Funches, guest (and prospective new member) of Christine Danser; Earlene Baumunk Cancilla and Maryann Belanger, both guests of Marge D’Amico.  There were 129 viewers of the meeting.

President Schreiber reminded the membership that there are six open slots for membership available and the procedure for submitting candidates is outlined on the Old Guard website.  He went on to give an update on Old Guard attendance at our weekly Zoom meetings.  Average attendance has been 148 attendees with a high of 188. This compares favorably to our average attendance at live meetings of 118 members. He reported that John Cotton has been named to head a committee to look into the possibility of returning to live, in-person meetings in the near future. He then conducted a vote of the membership on the proposed changes to Old Guard bylaws which had been emailed to all members. Results will be reported next week. And finally, he reviewed a list of the Old Guard Executive Committee members and committee chairs, for the benefit of the membership.

Marge D’Amico introduced today’s speaker, Jesse Jenkins, Assistant Professor of Mechanical and Aerospace Engineering and the Andlinger Center for Energy and Environment. Introducing his topic, “Getting to Zero: What Will It Take to Decarbonize Electricity”, Marge described Professor Jenkins as an energy systems engineer focusing on the role of the electricity sector and its role in economy and decarbonization.

Professor Jenkins began by telling us he was part of a group project with 18 others at Princeton University, titled The Net-Zero America Project. This study seeks to establish clean air as the linchpin, or key element, in reaching net-zero emission of greenhouse gases, which contribute significantly to the warming of our planet and a number of other dangerous conditions.  Achievement of this net-zero goal will stop our continued contribution to this problem. He was quick to remind us that elimination of greenhouse gases will not eliminate climate change, which occurs naturally, but will prevent us from continuing to add to the problem.

While the Net-Zero America project is huge and wide-reaching Jenkins focused his talk on the electricity sector as being the most critical aspect of the overall program. Failure to harness electricity’s impact on greenhouse gases will doom the total project to failure.  He cited the United States as the most logical leader in this effort since we have the means, and we are the largest global contributor to the problem.

He presented several charts to show the states that have either taken action or passed laws to eliminate greenhouse gasses. This carbon-free grid has progressed rapidly in the last two years and he predicted virtually 100 percent of the states will be participating by 2030. The challenge to get to decarbonization however is as follows: Currently clean electricity, such as hydrogen and steam, can readily decarbonize roughly one-third of electric energy. The remaining two-thirds is dependent on liquid gas hydrocarbons and jet fuel. The use of biochemicals in place of these petrochemicals is not currently sufficient to meet the demand. Thus, not only does electro-decarbonization need to handle the first third, but it also needs to take on another third to arrive at a ratio in which biofuels and biomass sources, such as from crops, can decarbonize the final third.

In his talk, Jenkins focused on the first two pillars. Currently natural gas and coal provide 60 percent of our electricity. Over the next decade electric demand will double.  With the expected
phase-out of coal by 2030, we will need to double carbon-free electricity by 2030 and rely on wind and solar power to grow from its current 10 percent contribution to 50 percent by 2050.

How is this possible? First, the costs of wind, solar, and battery power have plummeted almost 70 percent over the last decade, making them affordable. Because of this, wind and solar can become dominant by 2030. While that will require unprecedented growth in their use every year, it is doable. The alternative is nuclear and geothermal sources, which, he suggested, are better served for the 2030-2050 window once they have been more developed.

In summary, Jenkins proposed a three-pronged solution to achieve carbon-free electricity by 2050. The first two prongs are renewable energy sources like wind and solar and fast burst resources as in lithium-ion batteries, which we have achieved. Since wind and solar are weather dependent and batteries are time dependent, they cannot always be available at times when demand is greatest. Therefore, a balanced plan that also includes firm, low-carbon resources, such as geothermal, will also be necessary to maintain a cost-effective approach to net-zero emissions. Just as we have successfully invested in developing wind, solar, and battery technology, we will need to creatively invest in new firm, low-carbon, alternative resources. With this balanced approach we can achieve our goal of net-zero, carbon-free electricity.