Leadership in the 20th Century and Beyond

Michael Blumenthal
Secretary of the Treasury, 1977-79 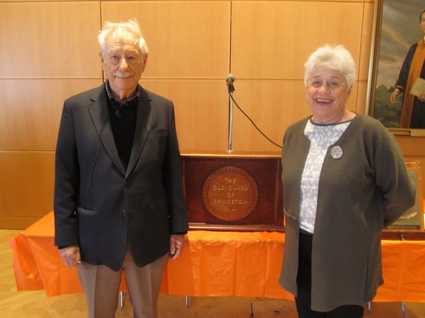 Michael Blumenthal, Speaker, and Ruth Miller, Introducer
Minutes of the 27th Meeting of the 73rd Year
The 103 members in the Friend Center on the Princeton University Campus were called to order by President Owen Leach at 10:15 am. Charles Rojer led the invocation. John Rassweiler read his minutes of the meeting on April 8, 2015. Three members introduced guests: David Atkin – his wife, Jerry Berkelhammer – his wife and Nancy Robins - her husband.

“What happens in history depends on people- on their leadership - and that depends on who has his or her hands on the levers of power at a particular point in time.” That was the theme of Michael Blumenthal’s talk at the Old Guard’s 27th meeting of the 73rd year on April 15, 2015.

Ruth Miller introduced Secretary Blumenthal as someone whose life story is a commitment to leadership and service. He was born in Germany, fled with his family to Shanghai in 1939, emigrated to the United States in 1947 and received degrees from Berkeley and Princeton. He earned a PhD in economics from Princeton and was awarded Princeton’s Madison Medal for outstanding achievement in public service.  His life has been divided between the private and public sectors. He served in the Kennedy and Johnson administrations and was Secretary of the Treasury under President Carter.  He was Chairman and CEO of Unisys.  After retiring he was the founding director of the Jewish Museum in Berlin.  He is the author of “From Exile to Washington: A Memoir of Leadership in the Twentieth Century.”

Secretary Blumenthal presented his views on leadership while also reviewing his personal history in the decades of the 20th Century.

In the thirties he was growing up in an upper-middle-class Jewish section of Berlin. In 1939 he had become a 13-year old displaced person in Shanghai.  After failing to be allowed to emigrate to Canada he was able to enter the United States. Later in life, when he was negotiating a trade agreement with Canada, he told his Canadian counterpart that they might have ended up on the same side of the table.

The effectiveness of a leader can depend on the personal relationships with the leaders of other countries.  One example he cited was the French and German cooperation under Giscard d’Estaing and Helmut Schmidt. In the history of the relationship between the United States and Israel, the lack of real understanding and communication between Menachem Begin and Jimmy Carter was contrasted with the ability of Barack Obama and Benjamin Netanyahu to talk with each other despite their disagreements. He did say, however, that the Israeli- Palestinian conflict is the world’s most insoluble problem.

There is no preparation for the leadership job of President of the United States. Harry Truman, a nondescript Senator and a Vice-President intentionally left uninformed turned out to be an effective President. Jimmy Carter, governor and engineer was, in fact, poorly suited to be President.  He was better suited to be ex-President, a job he has fulfilled admirably.

A leader must have courage. He pointed out what he felt was President Obama’s courage in trying to deal with Iran, approving the raid on Osama Bin Laden in spite of the failure of President Carter’s courageous but abortive attempt to rescue the hostages in Iran, and Obama’s opening to Cuba. He suggested that German Chancellor Angela Merkel doesn’t have courage so much as an exquisite sense of timing.  She times her decisions on the cusp of the rise of approval for the action she might take.

The accidents of history are also important. What if the number of hanging chads in Florida or the Supreme Court decision in 2000 had been different? Would we be in Iraq now? The tone of his question implied that he thought the answer was “no.” What if in 1939 Hitler had taken a plane as scheduled instead of a train that made him leave fifteen minutes before a bomb exploded at the spot where he would otherwise have been?  In Blumenthal’s own case, he ended up working at the White House because a friend was an assistant to President Kennedy.

Secretary Blumenthal summarized the qualities of leadership: A sense of power; humility that you don’t know everything; a willingness to listen to others; recognizing and picking the right talent; delegating major responsibility to those around you; and a sense of priorities.  In addition, one has to have courage, which in politics is in short supply. A true leader has the guts to say to the public, “I know what you want, but you’re wrong.  You elected me to do the right thing.” And one needs a measure of charisma and what George H.W. Bush called “that vision thing.”

He pointed out that “in history, nothing is certain until it happens.”  However, there was some uncertainty on the circumstances under which he had, or possibly had not, verified his identity by showing his signature on the paper currency of the United States of America.

The minutes included topics covered in a short question and answer period.
After thanking the speaker, President Leach adjourned the meeting at 11:30 am.