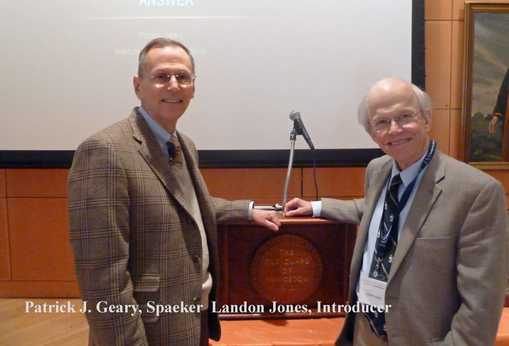 Owen Leach announced that a new building master for the Friend Center had been hired and any member wishing to join the audio-visual committee would be able to partake in training directly with the new building master. Ted Thomas and Marge D’Amico joined the committee, which now includes Bob Comizzoli (chair), Marge D’Amico, Bill Gear, Owen Leach, and Ted Thomas.
Lanny Jones introduced the speaker:

Patrick Geary is Professor of History at the Institute for Advanced Study. His field is medieval studies and his scholarship extends over an amazing array of topics in medieval history, both chronologically and conceptually—from religiosity to language, ethnicity, social structure, and political organization.

Many of his essays and books are standards in the field and have been translated in multiple languages. Currently, Geary is leading a major project that studies the migration of European societies north and south of the Alps, by analyzing ancient DNA in Longobard cemeteries in Hungary and in Italy. He also directs the St. Gall Plan Project, an Internet-based initiative funded by the Andrew W. Mellon Foundation that provides tools for the study of Carolingian monasticism.

Patrick grew up in Louisiana, went to Spring Hill College in Mobile, Alabama, and the Catholic University of Leuven, Belgium. In 1974 he received his PhD in medieval studies from Yale. He joined the faculty of Princeton's history department in 1974-1980 then went on to professorships at the University of Florida, Notre Dame, and UCLA. In 1990-91 he was a visiting member at the Institute for Advanced Study, and in 2012 he became a professor on the permanent faculty there.

As many of you know, medieval studies has a distinguished history at the Institute and Patrick's predecessors include Kenneth Setton, Giles Constable, and Caroline Bynum.

In 2011, Patrick received a research prize from the Humboldt Foundation, funded by the German Federal Government, and one of the most prestigious awards in the academic world.

One of his books of special interest, at least to me, is The Myth of Nations: The Medieval Origins of Europe, published by Princeton University Press in 2002. In this book he argues that the idea that national character was fixed for all time in a simpler, distant past is groundless. He contrasts the myths of national identity with the actual history of Europe's transformation between the fourth and ninth centuries--and argues that nationalist sentiments today, which are increasingly taken for granted in Europe, emerged only in the nineteenth century. Ultimately, he concludes, the actual formation of European peoples must be seen as an extended, dynamic process that began in antiquity and continues in the present.

This morning Patrick will be talking to us about a topic that bears on his current research: “Is there a role for Genetics in Writing History? A Medievalist’s Search for an Answer."

The speaker’s talk was more about the challenges and opportunities for genetic research in the writing of history than about research results. And as the talk progressed, it became quite clear why he is a Professor at the Institute for Advanced Study…and you’re not.

The talk began with a discussion of the interplay of historians, archaeologists, and geneticists, specifically how to know what really happened during the period known as the “Dark Ages”
For the historian, there is no reliable written history between the fall of the Roman Empire and the renaissance.

For the archeologist, the occurrence of a particular “S-curve” type of jewelry in ancient burial sites may mean that the dead people were of the same genetic origin or that the S-curve became popular and spread from one people to another through cultural, rather than genetic transfer.
The geneticist can either
1) use modern-day DNA from two living groups of people and work backwards to where a common ancestor will be discovered.  Usually following the y-chromosome of male lineage, this method reflects only direct descendency and does not account for the intervening period between the modern person and an ancient common ancestor, nor does it reveal when or “where” migratory movements took place.

Or 2), and this is Dr. Geary’s focus, the geneticist can study “ancient” DNA that is found in ancient burial sites, which tells us exactly where and exactly who populated difference places on earth way back when.

In the case of Europe, it is widely believed that ancient peoples from the North, called “Longobards” (“long beards), Barbarians, appeared in Italy in concurrence with the collapse of the Roman Empire, about 500 AD. Was it invasion, incursion, diffusion, or civil wars that brought down the Romans? Did Longobards just walk to Italy across frozen rivers, or is it possible that, as many modern day extreme nationalists believe, that Romans simply stopped thinking of their culture as superior and thus stopped defending it, which led to being overrun. Genetics can help answer such questions by showing how far and how fast genetic change occurred without regard to popular political theories of the modern day.

Dr. Geary showed several examples of such genetic mapping. One slide showed the “out of Africa” map of migration, showing homo sapiens populating the middle east 100,000 years ago, south Asia 70,000 year ago, Europe 40,000 years ago, Russia 25,000, Alaska15,000 and North America 12,000 years ago.  Another showed the male population of eastern England having almost no genetic relationship to the population of western England, but a close relationship to people from across the North Sea, suggesting either a genocide or possibly that Saxon genes from the continent were so superior to indigenous English genes, that Saxons simply “got all the girls.” Genetics from Iceland a thousand years ago show the women were from Ireland, but the men were from Norway, suggesting that Ireland was a well-populated “fishing ground” for the happy Norsemen.

So on to Geary’s current work…he’s using ancient genetic samples from known Longobard cemeteries in Collegno, Italy and Szolad, Hungary, to answer the question of whether today’s Lombards, the Italians, are a genetic match to Longobards from the north and/or ancient Pannonians who lived in what is now Austria/Hungary/Slovenia, and may have taken on Longobard cultural characteristics through cultural, rather than genetic, migration.

There are many challenges to his research, among them:During Q&A, he was asked about the dangers of genetics in the modern day. He quoted the Hungarian cultural minister, who, upon learning of Dr. Geary’s work, said, “oh goody, now we can find out who the realHungarians are.” And in the news this week from Ukraine, Russian separatists want to use DNA to find out who the Jews are.

Dangerous, indeed, Dr. Geary.  So let’s hope his wonderful tool can be restricted to the study of Longobards and Neanderthals, and not be used by them.