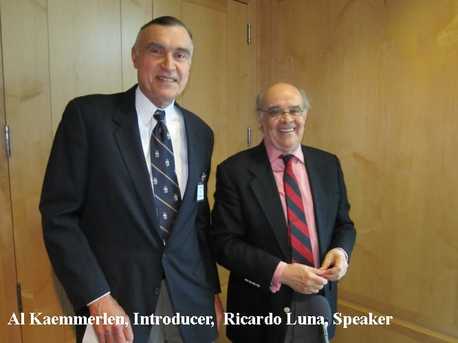 AI Kaemmerlen introduced the speaker, Ricardo Luna, distinguished Peruvian diplomat who had been Peru's ambassador to the United States, and also to the UK and the UN. He had taught at a number of universities and now returned as ambassador to Princeton from where he graduated in 1962, as Visiting Fellow in Latin American Studies.

His overall topic was the relationship between Latin America and the United States or the South and the North. He started with the historical background mentioning the differences in political cultures, in religion, race, and outlook. The Spanish conquest of the South came at the height of the Reformation and therefore was full of zeal. By contrast, settlers in the North came as a consequence of the Reformation and therefore sought toleration. North and South took different paths in the last two centuries and had two distinct types of ruling elites. The South had a tradition of intellectual but ineffectual leadership while North had a more pragmatic and more creative ruling elite. The North had developed from modest beginnings to global preeminence. The South went from a large empire to fragmented, unequal societies.

However, bridges had been built erratically in fits of enthusiasm, periods of long silences, and subtle distancings.

Luna discussed briefly three American presidents. President Roosevelt inaugurated good neighbor policy and non-intervention in Latin American affairs. After him, there were short periods of convergence. Carter promoted human rights, negotiated the Panama Canal agreement, and tried to modify American support of authoritarian regimes. Clinton was the most significant president in relationship to Latin America. He arranged the first summit of heads of state, held in Miami, and welcomed inputs from Latin American countries instead of all arrangements being imposed by the United States. This summit of 1994 had a concrete goal: the free trade area of the Americas. Though the goal was abandoned by 2005, the summit process continues with meetings every three years. The recent was in Cartegena in 2012 which discussed three issues, immigration reform, a new drug policy, and ending the Cuban embargo. No final document was adopted because the United States would not accept proposals.

Luna said the United States faced three challenges:
1. An economic and energy policy that goes beyond the existing and projected trade pacts.
2. Help improve democratic government in the South by patiently monitoring the anomalies there.
He discussed the two different concepts of democracy: 3. The third challenge was for the United States to increase global and regional cooperation with Brazil and Mexico, key players in the South about which he spoke. The United States must acknowledge Brazil's increasing regional and global roles as well as recognizing the South was a link between West and East.

Difficult problems remain for the South, problems of poverty, inequality, and frail institutions. These were being overcome, especially because of sustained high growth and more democracy. Poverty had been greatly reduced in the last decade but inequality was still a serious problem.

He pointed out other problems for the United States.
1. The unsolved fiscal and financial crisis in the US.
2. The persistence of militarization in American foreign policy.
3. Its obsession with China.

Mr. Luna concluded with some trends in the South.
1. The region is economically stable and growing. One can contrast this with stagnant growth in United Stated and Europe. He asked, "Is this the Latin American decade."
2. Millions of Latin American people have entered the middle class and democracy has been stabilized in many countries except in Venezuela and Nicaragua.
3. China/Latin American
trade has surged, and this connection is most important after the connection
between Latin America and the United States.
4. The United States has lost its hegemonic position in the South and American foreign policy is not as fundamental as it once was. The decline of American influence is accompanied by differences over Iran and Cuba. He suggested that the United States should talk to dissidents in Cuba rather than those in Miami.
5. Brazil had emerged as a leading international power.
6. There were conflicts in a number of countries between government and media and new laws were introduced to control the media.
He ended by answering a few questions.