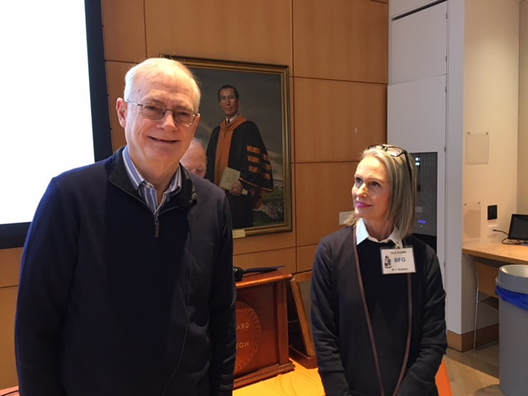 President Jock McFarlane called the meeting to order at 10:15 a.m. in the Friend Center.
Julie Denny led the invocation, and Peter Epstein read the minutes of the last lecture to a round of applause.

The president announced that the speaker for the next meeting, on April 25, would be Timothy Boyce, whose talk is entitled “From Day to Day: One Man’s Diary of Survival in Nazi Concentration Camps.”

BF Graham introduced the speaker, Thomas Shenk, the James A. Elkins Jr., professor of life sciences in the Department of Molecular Biology at Princeton University and co-director of the Program in Global Health and Health Policy. He is a fellow of the American Academy of Microbiology and the American Society for Virology and the former president of both. He is a member of numerous other scientific organizations, served on the board of directors of Merck and Company, and is on the board of several health care foundations.

Professor Shenk began his informative and authoritative talk by explaining that viruses are all around us but that most are harmless to humans. He explained that they are constantly mutating, and his concern is the role of such emerging viruses in human disease.

He showed a graph that illustrated the dramatic decrease in deaths from infectious disease, from 800 per 100,000 people 100 years ago to fewer than 50 today. An abrupt peak in that falling curve was due to the great influenza epidemic of 1918 that killed 3 percent of the world’s population. But a century of improved public health and other measures prompted a health official in 1940 to proudly declare that it was time to close the book on infectious disease.

Though we feel quite comfortable in our Princeton homes, Professor Shenk challenged us, saying that infectious diseases still causes 12 million deaths a year around the world. Many of those are associated with so-called zoonotic viruses, which live harmlessly in animals but acquire mutations that make them pathogenic to humans. He recalled the SARS virus in China in 2003, which spread from ducks, and the Ebola virus in West Africa in 2014 that originated in bats. And today we face the added threat of terrorism. The nationwide anthrax scare in 2001 was traced to a mailbox on Nassau Street, here in Princeton. Professor Shenk's lab was thoroughly investigated by local police and the F.B.I., but he assured us: “I didn’t do it!”

The Ebola epidemic in West Africa infected almost 30,000 people with a shocking 40 percent mortality rate. It resulted from a single mutant letter in the virus DNA code that enabled it to pass from bats, in which it is harmless, to humans. It is important to recognize that Ebola is not contagious until one is exposed to the bodily fluids of a symptomatic patient, so quarantine and strict contagion precautions minimize spreading. Local dietary and burial customs, and initial failure to enforce strict precautions, had allowed widespread contagion. When the first American case appeared in Dallas, public confusion and media hype added to the problem. The role of the Centers for Disease Control and constitutional issues of states’ rights (Don’t mess with Texas) resulted in a loss of public confidence, and two nurses in Dallas became infected. Clearly, we were not prepared.

Turning now to influenza, Professor Shenk reminded us that the particularly virulent virus of 1918 had a death rate of 10 to 15 percent. Although the annual flu we face has a mortality rate of a mere 0.1 percent, it still results in 25,000 deaths a year. The public health problem is that flu is contagious before symptoms are present, so unlike Ebola, confinement doesn’t work. Furthermore, the virus mutates rapidly, and a new vaccine must be prepared every year, with variable effectiveness ranging from 40 to 80 percent.

Ferrets respond like humans to the flu virus. Though the idea of squirting virus into a ferret’s nose sounds daunting to me, these experimenters persevered, using the highly lethal, but minimally contagious H5N1 flu virus obtained from a patient in China, and allowed it to mutate to a form that could easily spread and cause a pandemic among humans. At a scientific meeting they proudly, but perhaps unwisely, announced that they had developed the most dangerous virus in the world. Unsuccessful attempts were made to prevent the publication of this work lest terrorists get hold of it, and though such research is now carefully monitored, the threat persists.

Professor Shenk concluded that for infectious diseases, it’s still not time to close the book!

​He then answered a number of questions and assured us that he is going to get his flu shot this year, recalling with pained regret how miserable he was the one year when he failed to do so. Perhaps our final take should be: it’s not just hype, and it surely is a threat: “Get your flu shot, or else!”