The Usefulness of Useless Knowledge

Robbert Dijkgraaf
Director of the Institute for Advanced Study 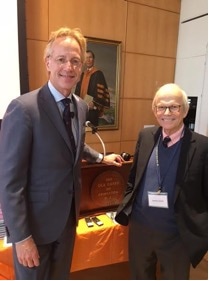 Robbert Dijkgraaf and Landon Jones
Minutes of the 29th Meeting of the 75th Year
The 29th meeting of the Old Guard of Princeton’s 75th year was called to order by President Jock McFarlane at 10:15 a.m. in the Convocation Room of the Friend Center. Attending were 121 Old Guard members and guests. Roland Miller led the invocation.  Minutes of the April 12 meeting were read by Everett Kline.

Tall and slim, with receding red hair and wearing rimless glasses, Dr. Dijkgraaf captured and kept the audience attention with an encomium to basic research. Moving occasionally from behind the podium with athletic grace, he sprinkled his formal remarks, delivered rapidly with a delicate Dutch accent, with a number of amusing anecdotes, and ended with a plea for support of nonapplied research in the face of the current atmosphere of budget cutting and coolness toward science. Many slides illuminated his points.

He began his remarks with an acknowledgement of the essay “The Usefulness of Useless Knowledge” by the founding director of the Institute for Advanced Studies, Abraham Flexner. Appearing in 1939 in Harper’s, the essay was an inspiration for the speaker’s talk. In it Flexner recounts how curiosity, rather than the desire to find applications, was the moving force behind many important “useless” discoveries that in fact later proved to be extraordinarily useful. Our speaker gave reinforcing examples from the World’s Fair of the same year: television, the fax machine, washing machine and even a crude robot. None of those would have been possible without “useless” basic research of earlier years.

The speaker gave a succinct history of the institute from its founding by Louis Bamberger and the Fuld family in 1930, and included a story as to why he could find no quote from Einstein praising Flexner, the first director. It seems that Flexner once intercepted a letter from President Roosevelt to Einstein inviting him to the White House. Flexner, without telling Einstein, took it upon himself to respond to the president. He turned down the invitation on Einstein’s behalf saying the latter was too busy with his research to attend. Evidently Einstein never forgave Flexner for the intercession.

On the other hand, Flexner had a remarkable career, including his authorship of a 1920’s report on medical schools in the United States whose harshly critical content shook their world and resulted in a wholesale modification of medical training.

We learned again the ubiquitous role of electricity, quantum mechanics and relativity in the world today. For example, 30 percent of our GDP is based on quantum mechanics. Those were subjects with no apparent application when first investigated. They were pursued out of curiosity and a personal need to understand the world. More recent discoveries like the Higgs boson and gravity waves will perhaps someday have utility.
Einstein said imagination is more important than knowledge, which is limited, while imagination “embraces the entire world.” In summarizing the raison d’étre for basic research, five points were stressed: Knowledge in and of itself is worthwhile, new tools and techniques arise, the best minds are attracted, the public good benefits across disciplines and countries and, finally, innovation results. As to the last point, it is estimated that there is often a $10 to $100 return per dollar invested in basic research, but in the case of Google the return was $100,000 per dollar.

With calm passion the speaker then turned to present troubling trends in funding support for basic research. Federal funding for basic research has declined from a high of 2 percent of GDP in the 1950s to 0.8 percent now. He found the outlook grim in the present environment, with announced cuts in funding on the horizon, and the success rate for grants expected to go even lower than its present 50 percent. Even support of the National Institutes of Health is threatened. Industry presently funds only 6 percent of basic research and foundations not enough more.

He discussed present education in the United States -- which he found unsatisfactory -- especially with its emphasis on testing rather than stimulating and encouraging curiosity, and with an elitist formality rather than a populist sharing of wonder.
The director ended his talk by reading the first paragraph from Flexner’s essay, which praises the intellectual and spiritual life as having “undreamed of utility.”

The question period brought out Dr. Dijkgraaf’s frustration with the present federal administration: “There’s no one to talk to,” he said. Other questions touched on the issue of morality in science, the present dominance of short-term goals versus long-range understanding, and an expected movement of the center of gravity of research from the United States to Europe, where research commands a larger percent of the GDP, or Asia, where there is a lot of money. He mentioned the negative impact of President Trump’s travel ban on institute personnel and the hosting of international conferences.