There are No Excuses in Paradise:
The Institute for Advanced Study,
​Its History and Mission 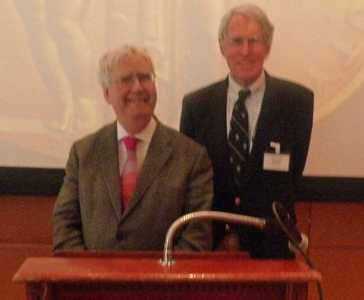 The minutes of the April 13 meeting were read by Marge D’Amico.

Henry King introduced the speaker, Dr. Peter Goddard, The Director of the Institute of Advanced Study in Princeton NJ whose lecture title was:
There are No Excuses in Paradise: The Institute for Advanced Study, Its History and Mission

The Institute for Advanced Study is an independent research organization dedicated to furthering the bounds of human knowledge. The Institute recently celebrated its 80thanniversary and Peter Goddard is its 8th Director.

Flexner was born in Louisville, educated at John Hopkins, went back to Louisville as a teacher and while doing some private tutoring was able to get his student accepted by Princeton University. He then started a prep school which was very successful in getting its students into leading universities. He later studied at Harvard and was commissioned by the Carnegie Foundation to do a study of American and Canadian Medical Schools. He visited all 155 of them and issued a report in 1910, which was well received and which caused major changes in the form of medical education. He also visited universities in the USA, UK and Germany and issued a book in 1930. He concluded that US universities were not in the lead in research, that German Universities put more stress on independent studies and that Oxford and Cambridge were preoccupied with the education of gentlemen.

In 1929 Bamberger met Flexner who with all his educational experience was able to convince Bamberger that what was needed was not a medical school but a school for independent and original research at the highest level. As far as location was concerned, Flexner changed the wording in a document from “Essex County” to “in the vicinity of Newark”. By this subterfuge he was able to move the location to Princeton, NJ. There were other well founded reasons of course for locating the new school in Princeton; the Princeton University Library and the intellectual community at the university.

The Institute was incorporated in 1930 and Flexner, as the first Director, had to start hiring staff. At a visit to Caltech he was able to meet Albert Einstein, who was a visiting professor and subsequently sent him a letter offering him a position as the first professor of the Institute at a salary of $15,000 per annum, which was equal to that of the President of Princeton University. Einstein joined the Institute in 1932. Flexner also hired Oswald Veblen, another mathematician away from Princeton University and later John Neumann.

The Institute started operating in Fine Hall on the Princeton University campus because the Board did not believe in investing in buildings. They wanted to concentrate on intellectual achievements. However in 1939 the Board decided that a separate building was necessary and they purchased a site in Princeton Township, which was expanded in subsequent years to 800 acres. The building, named Fuld Hall, contained offices for the staff, lecture rooms, a dining room and most importantly a Common Room where tea was and is still served every afternoon at 3 PM allowing the staff to interact. 589 acres of the site are preserved as woods with trails open to the public for walking, skiing, bird watching etc. It is reported that Dirac, Einstein and Veblen were very keen on chopping wood and opening up the trails.

The Institute now has 4 schools: Mathematics, History, Natural Sciences and Social Sciences. There are 28 full time professors and 180 Members who usually spend one year at the Institute. Sixty percent of the faculty is from outside the USA and four professors on the faculty are women.

In summary the main characteristics of the Institute are:
A secluded environment for fundamental enquiry into the unknown
Scholars have the opportunity to pursue their own research interests or ideas
Scholars have no administrative or teaching duties
No prejudice against race, religion or sex
An international environment
Ability to cross disciplinary boundaries
The Institute has a very expansive website at www.ias.edu, where one can read the Annual Report and details of the kind of research performed. There is also a book titled, “Institute for Advanced Study” by Linda G. Arntzenius available in book stores or at the library.