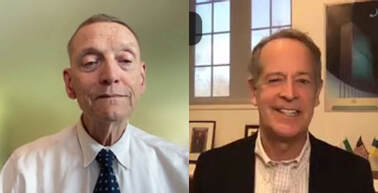 Minutes of the 29th Meeting of the 80th Year

​President Stephen Schreiber called the meeting to order at 10:15 AM. Herb Kaufmann read the minutes from the April 13, 2022, meeting. There were 144 recorded attendees.  Guests present were John Connorton, a guest of Dermot Gately, and Rainer Muser, a guest of Frances Slade.  Mr. Schreiber announced that the list of Old Guard officers would be presented at the next meeting, to be voted upon by Zoom at the following meeting.  He said that the speaker list for the fall has been prepared and that all talks would be in person at the Springdale Golf Club.  He reminded the members that there is a scheduled Morning Hospitality Event for Old Guard members from 9:30 to 11:30 AM on Tuesday, May 17, 2022, at the Springdale Golf Club.

Len Berlik introduced the speaker, Professor Martin Flaherty.  Professor Flaherty is a human rights lawyer; a founding member and the current Co-Director of the Leitner Center for International Law and Justice at Fordham University Law School. Professor Flaherty’s topic was “China and Xi”: a study of where China is today under its current leader, what has motivated that leader, and what we might expect from the future.

Professor Flaherty began his talk by discussing what he called the “post engagement” engagement of China. After the 1979 reforms in China, the hope in the West was that China would adopt a more robust and less repressive version of the rule of law and of the human rights of its people and become a responsible member of the economic order.  Regrettably, this has not happened. China today moves towards authoritarian leadership, a nationalistic vision and the repression of human and civil rights for its people.

Flaherty used three illustrations to demonstrate his point. He began with Hong Kong. For 15 years after the 1997 Convention for the Extension of Hong Kong Territory lease expired, Hong Kong, although still a part of China, was a government with independent courts and with protections of human rights. But anti-extradition rules along with the 2021 passage of the National Security Law have threatened civil liberties there and have attempted to silence dissent. This has caused grave concerns about the future of Hong Kong’s one country, two systems model and has created mass protests among the Hong Kong people, leading to a reciprocal brutal response from the People’s Republic of China.

Similar human rights transgressions have occurred in the Xinjiang Province where the PRC government has placed the region under tight surveillance, imprisoned over 1.5 million Uyghur men in what it euphemistically calls “Re-education Centers,” and is systematically seeking to destroy the Muslim religion and culture of the Uyghur people.

And as Taiwan democratized and moved further away ideologically from the PRC, the West has seen China’s increased militarization and nationalist vision clearly threatening to Taiwan’s independent future.

And we are left wondering, what went wrong, what now, and what next?

According to Professor Flaherty, a big part of what happened corresponded to the leadership ascendency of Xi Jinping. Xi came to leadership in 2007 and has cemented his power by being the first person to secure all three key leadership positions in China by 2013. He has since become a president for life, and has gradually adopted more and more Maoist ways of governing. These include adopting a cult of personality, purging his rivals, repressing free speech, promoting the primacy of the party over human rights, and cracking down on political dissent.  And his increasingly aggressive foreign policy seems to be centered on a nationalist, authoritarian vision, propped up by a strong military, and a rejection of the influence of the West.

Where is China heading next? Although Xi’s popularity is still high, his recent unpopular Covid lockdown policies have negatively impacted the economy and the availability of food for the people, leading to some popular resistance and protests on the streets of Shanghai and other cities. Many Hong Kong citizens who have tasted the freedoms of democracy now openly refuse to accept the PRC and its authoritarian ways. And Taiwan does not seem ready to willingly give up its gains in democracy and civil rights they have enjoyed for the past few decades. Will protests continue to grow? Will Taiwan become the next Ukraine? Is Xi just another Putin?

Although the two leaders do share similar authoritarian and nationalistic sentiments, and although they seem to find a common enemy in the West, Flaherty feels that Xi is more measured than Putin and that, although China has abstained from condemning Russia at the UN, he has become aware of the international sanctions response to Russia. Perhaps that, along with the current civil unrest, might serve as a restraint to his ambitions.

When asked about life after Xi, Flaherty answered that, hopefully, strong leaders like Xi sometimes overplay their hand and experience pushback that can lead to leadership change and reform. Less hopefully, he feels that Xi will probably continue in power as long as he wishes and will hand off leadership when he’s ready to one with a similar vision and leadership style.