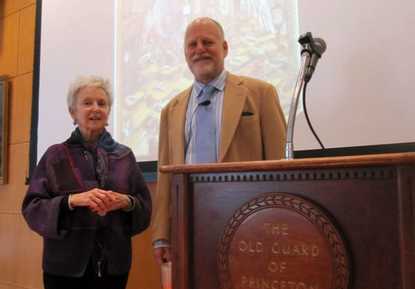 Introducer, Julia Coale, and Speaker, Henry S. Farber
Minutes of the 28th Meeting of the 73rd Year
The 28th meeting of the Old Guard’s 73rd year was called to order at 10:15 and 3 seconds, by me.

There were no guests. Arthur Eshenlauer read the names of 15 proposed members, advising members to check their email to read biographies of the candidates prior to election April 29.

Professor Farber graduated from Rensselaer Polytechnic Institute In 1972, the New York State School of Industrial and Labor Relations at Cornell University, in 1974 and Princeton University , where he received his Ph.D.  in 1977). Before joining the Princeton faculty in 1991, Farber was Professor of Economics at the Massachusetts Institute of Technology. In addition to his faculty position at Princeton, Farber is a Research Associate of the National Bureau of Economic Research (NBER) and a Research Fellow of the Institute for the Study of Labor (IZA), among others. He is also a Fellow of the Econometric Society, the Society of Labor Economists, and the Labor and Employment Relations Association. His current research interests include unemployment; liquidity constraints, reference dependent preferences, and labor supply; labor unions; worker mobility; wage dynamics;  analysis of the litigation process; and analysis of voter behavior.

When I first saw the topic, “Why you can’t get a cab in the rain,” I feared this might be one of the shortest Old Guard presentations in history. I called a Valley Girl Middle Schooler I know for an answer and she said,” well, like, duh, it’s raining.”

But not so fast. Professor Farber took us on a fascinating tour of neo-classical supply and demand economics, behavioral economics and “big data,” demonstrating how modern day economists go about understanding the consumer behavior that they observe. Along the way,  we learned about some most interesting concepts of human irrationality:  Opt-in vs. Opt-out, Loss Aversion, Endowment Effect, and my favorite, and that of every procrastinator, Hyperbolic Discounting.

Loss Aversion was shown to be a powerful irrationality device in an example of how “framing” a result could completely reverse intentions by phrasing  one as a gain in lives saved, and the other in terms of potential lives lost. Same outcome, but vastly difference preferences depending on how the issue was framed.

“Endowment effect” says, if you already own it, you value it much more highly than if you don’t own it.  He told of an experiment where half of a group was given a souvenir mug.  The half with were asked to indicate their minimum selling price, and the half without to indicate their maximum buying price.   The half with a mug valued it almost twice as highly as those who didn’t already own it.  Same mug. Think about the implications of this when selling a home.

And “hyperbolic discounting.” Ask me to do something a year from now and the price of saying yes is pretty  low. Ask me a week before and the price is much higher, and the day before, “no way.”  For our taxi example, what a driver says he’ll do on a rainy day is one thing, but what he actually does when the drops start falling can be quite another.

And we also learned about the power of “big data.” Due to computerization and automation of the taxi fleet since 2009, Professor Farber was able to analyze, without graduate student help, he points out, every single taxi ride taken in New York City over five years, some 180 million trips per year, 62,000 drivers at some point during the five years. And what was revealed supported the classical economic view that higher wages, indeed, should yield more work.

But wait a minute. If that’s true, and we all know that you can’t find a cab when it’s raining, then why would there not be more cab drivers striving to fill the demand generated by a rainy day?

As it turns out, Professor Farber is a very Columbo-like detective. He used big data to dig beneath the obvious assumptions that we all would make about rainy days and driving a cab, and found that driver behavior is, in fact, classic and rational, but not for the obvious reasons. And the result is that the drivers’ classic decision-making seems to turn the supposed “law of supply and demand” on its head. On a rainy day, what you ACTUALLY get is greater demand and less supply…the worst of both worlds. But why?

The key element in his analysis is that multiple variables determine whether a cab will operate or disappear when it rains. Yes, his research agrees that more people take cabs in the rain, so the driver is spending more time with a fare in the cab.  BUT…we also know that income in a cab is a function of time and distance, distance is more lucrative than time, but the rate paid for distance is a non-variable.  So guess what: when it’s raining traffic is slower, so, yes, more time is spent with passengers, but less distance is covered. So the presumed wage increase for a rainy day is not nearly as significant as one might expect, due to slower driving conditions.

And then there’s risk aversion. The biggest risk to a driver’s income is that he won’t have a cab to drive, so getting into a wreck carries a very high cost. And receiving and disgorging passengers, often at crazy angles in busy streets, is much riskier in rainy conditions. So it appears that some drivers stop driving in the rain, in spite of the fact that they can make marginally more money. So why can’t you find a cab in the rain? Let’s go back to that middle schooler…because it’s raining.

The question period provided an interesting story of how one Old Guard member confronted the rainy-day/no cab situation. No bus, no cab, so he finally called Uber, which charged him $35 to go from the Metropolitan Museum  to Penn Station.   After professor Farber commented on the economics related to “surge pricing” versus fixed rate taxi meters, another member was recognized, but rather than ask a question, he made a statement. “David Adkin should have exhibited classical economic behavior and walked to Penn Station, thereby saving himself thirty-five bucks.”
​
So ended the lesson.
Prepared by:  Owen G. Leach