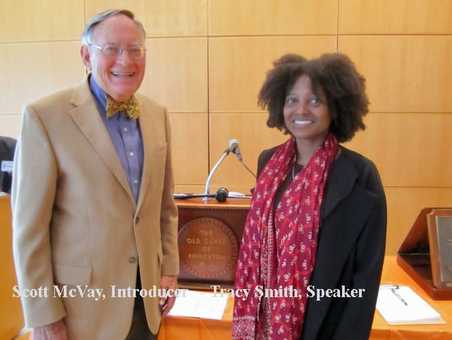 The invocation was led by Joan Fleming.

President Miller announced the recent death of Edward T. Coda, followed by a moment of silence.

Claire Jacobus announced the slate of officers of the Old Guard for next year, which was approved unanimously by the membership. The newly elected officers, whose names were read, stood to identify themselves.

President Miller announced that the speaker at the next meeting of the Old Guard on April 30th would be Michael McAlpine, Assistant Professor, Princeton University, talking about “Nano-Bio-Devices.”

When Roland Miller asked me if I would be the minute taker for the April 23rd meeting, I agreed and then looked at the schedule to see the title of the talk: “Life on Mars.” Clearly, Roland has asked me to take the minutes because he knew that my professional career had been in neurobiology, and that I had a background in physics.  So astrobiology–life on mars–was right down my alley.  But, no!  It’s poetry!  Even better. The poetry we heard last week, at least in part, was a meditation on time and space, life and death, the expanse of the universe and the intimacy of human life on our tiny planet.

Tracy K. Smith, Professor of Creative Writing in the Lewis Center for the Arts, Princeton University, was introduced by Scott McVay.  She was born on April 16, 1972, in Falmouth, MA, into a family with roots in Alabama, and grew up in northern California. In 1994, she received a B.A. from Harvard, then in 1997 an M.F.A. from Columbia University. At Stanford from 1997 - 1999, she was a Stegner Fellow in poetry. She has taught at the University of Pittsburgh and Columbia University. Princeton hired her in 2008, where she is now Professor of Creative Writing.

Tracy Smith is married with three (young) children. Currently she lives in Brooklyn with husband and children, but a move to Princeton may be imminent.

Professor Smith has published three books of poetry, each of which has been awarded prizes, including, for her third book, “Life on Mars,” the Pulitzer Prize for Poetry in 2012. (All three of her books have been published by Graywolf Press.)

Professor Smith said that many of the poems in her first book, “The Body’s Question,” were written assuming the “persona” of individuals quite different from herself, including, in this case, undocumented Mexican immigrants to the United States; some based on real people, some imaginary.  Living in California, she had become interested in Mexico and the relationship between Mexico and the United States and its populations.  Poems from “The Body’s Question” from which she read included “Miguel,” “Luis,” “Juan” and “Alejandro.”

Poems in this book also include elegies growing out of Professor Smith’s struggles to come to grips with the death of her mother when she was a girl.

Professor Smith’s second book, “duende,” germinated during a trip to Spain in which she wrestled with the relationship between Mexico and Spain, colony and colonizer, as well as, more personally, the aftermath of a divorce. The term “duende” in Spanish is difficult to translate.  It’s original meaning, a goblin-like creature in Spanish mythology, has evolved into a term denoting charisma and personal magnetism, as well as mystery. The poet Federico Garcia Lorca said that “duenda” is what makes great art stir the emotions.

From this book, Professor Smith read “Slow Burn” and “Duende.”

As mentioned earlier, “Life on Mars,” Professor Smith’s most recent book, won the 2012 Pulitzer Prize.  Professor Smith’s father was a scientist/engineer who worked on the Hubble Telescope. In the poems in this collection, Ms. Smith communes with her father, dealing with his illness and death, and looks outward to the universe and inward to her grief. At the time during which she wrote these poems, she was also watching a lot of B movies, especially science fiction, and thinking about Charlton Heston and “last man scenarios.” She read from the poems “Sci-Fi” and “”My God, It’s Full of Stars.”  (This title was stolen from Arthur C. Clarke’s novel,  “2001.”)

Here is a portion of that poem:
A lively Q. & A. session ensued, marked by both questions and comments from Old Guard members, including questions about Professor Smith’s creative processes, her early poetic influences, the impact of her teaching on her writing, and the role of race in her writing.

Professor Smith concluded with the reading of a recently written poem.