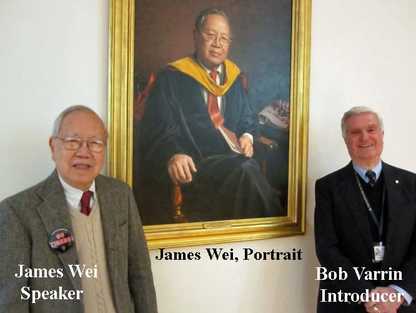 This session was distinctive in two respects.

First, when John Lasley introduced his guest, Dottie Batho, he noted that, though she had moved away from Princeton some years ago, she would return next week as they are to be married and she will once again take up residence in town. Following appreciative applause, President Miller remarked that this was perhaps the first wedding announcement she could recall at a meeting of the Princeton Old Guard.

Secondly, our speaker just happened to be our first landlord of the very meeting room in which we were presently convened. Honorary Old Guard member James Wei was Dean of Engineering when the Friends Center was completed and he kindly arranged for the Old Guard to meet here whenever the room is available.  Furthermore, when we do meet in the room, his smiling portrait keeps a watchful—though not necessarily discomfiting—eye on our speakers and our proceedings. Some of us wondered how well he himself might bear up under this quietly amused scrutiny, but we were unable to spot any uneasiness on his part, or any detectable changes of attitude on the part of the portrait.

Introducing the Emeritus Dean, Robert Varrin spelled out James Wei’s signal achievements and honors as a chemical engineer. He received his BS degree from the Georgia Institute of Technology and his doctorate from MIT. Repeatedly, his colleagues in the field have ranked him among the nation’s top one hundred, and— more recently—top thirty chemical engineers. He was president of the American Institute of Chemical Engineers in 1988-1989, was elected to the National Academy of Engineering in 1978, and to the American Academy of Arts and Sciences in 1982.

In 2012, Professor Wei published a book, Great Inventions that Changed the World, which encapsulates a course he taught to non-engineering undergraduates at Princeton University. In the book, he traces some of the profound consequences for human development over the millennia that flowed from some major inventions. In his talk, he hoped to give us a taste of what he covers in the book.

He began by traveling back two million years before the advent of our modern human species and to the beginning of our evolution as toolmakers. The Oldowan chopper, a cobble with one sharp edge, is the first known human tool. Over the course of a million years, that crude invention evolved into the double-edged Acheulian hand axe, and then, over the course of another half million years or more, was refined into sophisticated stone points for use on spears and arrows.

All were substitutes for tooth and claw. They enabled humans to cut through flesh like lions, dig out roots like hogs, and crush bones to get marrow like hyenas. No longer an insecure and fragile mammal, limited in diet and vulnerable, humans had become more predators than prey. As millennia went by, Dean Wei observed, we gained dominion over the land, learned to sail like fish, fly like birds, and much, much more.

We had developed a culture of invention—so much so, he pointed out, that in the past two centuries many of us have come to believe we are entitled to continuous advancement and to an annual rise in our standard of living of at least three percent.

He then traced the consequences of a second great invention some 800,000 years ago—the management of fire. Under human control, fire could serve many purposes: it could provide warmth. It could be used as a tool for defense against predators. It could open up a new universe of foodstuffs for human consumption.

This had two profound consequences. First, it enabled modern humans to populate most of the planet over the course of about 75,000 years. No longer were we confined to the tropical and warmer temperate regions. Humans could move out of Africa where they originated, and even venture beyond the warm coasts of Eurasia. They could move north into more frigid regions in search of larger game. This led them into ice age Europe and northern Asia, then across the Beringian land bridge into the Americas, and south through the temperate and tropical regions of this hemisphere all the way to the icy tip of South America at Tierra el Fuego.

Over time, the ability to manage fire led to a long chain of inventions to help us find and store fuels, vent heat, and, ultimately, generate and utilize many other sources of energy. It led to the invention of all kinds of ways to use materials: copper, bronze, iron, each of which defined a step in the development of human society. Ultimately, it led to the steam engine and the industrial revolution—the second major consequence that arose from our ability to manage fire. Ironically, the industrial revolution led to the mass movement of people off the land and into cities, the beginning of the urban age. This contravened some of the consequences that flowed from the third great invention cited by Professor Wei—the development of agriculture ten thousand years ago in the Fertile Crescent.

Husbandry anchored a large part of the population to the land. Until farming was invented, he remarked, we were nomads constantly on the move to hunt and gather food. With the invention of farming, people could stay in one place. Villages replaced temporary encampments.

The chain of inventions that ensued is long: techniques to choose and propagate and modify seeds, efficient ways to plant them and to nurture crops, and then to harvest and store and preserve. In the drier regions, it was necessary to invent irrigation, which required high levels of organization and sophisticated resource allocation. From that flowed the invention of government (the “hydraulic theory” of government, as he wryly put it). To sustain crops, fertilizers—at first, natural—were applied. Then it became necessary to invent replacements for the exhaustible supplies of guano and manure. We needed ways to manufacture combinations of nitrogen (to build body proteins), phosphorus (essential for our DNA), and potassium (essential for our nervous systems).

Just before World War I, German chemist Fritz Haber, a friend of Einstein, figured out how to fix nitrogen, the fundamental process needed to manufacture artificial fertilizers. One tragic consequence: it opened the door for the invention of TNT, nitroglycerine, poison gases, and thus transformed the character and scale of war. Haber’s wife was so horrified over the use of poison gas during World War I, which had emanated from Haber’s work, that she committed suicide—neither the first nor the last instance of undesired or unanticipated consequences that sometimes flow from our inventions.

For example, Professor Wei cited the search for a refrigerant, other than ice, that could be used to help preserve food. Ammonia was used starting in 1859, enabling Argentina to ship mutton to Europe and become the sixth richest country in the world for a time. But ammonia is poisonous. Sulfur dioxide and butane were similarly dangerous or flammable. Then, through three days of ingenious sleuthing using the periodic table, Thomas Midgely developed a non-flammable, non-poisonous refrigerant based upon fluorine—CFC. Unfortunately, we later discovered that CFC damages the ozone layer, which protects the planet from dangerous ultraviolet and other radiation. Its use had to be discontinued. An effective replacement is yet to be found.

Nonetheless, though agriculture could feed only about1.5 billion people in 1900, today—thanks to fertilizers and Norman Borlaug, who invented a strain of wheat that is short, doesn’t bend, is much more easily harvested, and is less susceptible to disease—we can feed seven billion people.

Dean Wei then dipped quickly into other chapters of his book to provide a few anecdotes to give us a taste of what readers might find there.

In the realm of health, for example, he pointed out that, before 1940, bacterial diseases, rather than heart disease, stroke, or cancer killed most people. The discovery and invention of some of the miracle drugs played an important role in that transformation and he briefed us on the story of penicillin.

He described how a chain of serendipitous discoveries can lead to totally unanticipated results. In 1856, when William Perke set about to try and synthesize quinine to fight malaria, he discovered a mauve residue during his experiments that could be used as a purple dye. Empress Eugenié wore a robe dyed purple with that dye and so mauve became all the rage in the world of fashion. This sparked the synthetic dye industry. And it turned out that some of those dyes could adhere to chromosomes. Thus, they found their way into laboratory use as microscope slide stains, and one was developed into the drug Salversan to treat syphilis.

While Professor Wei briefly touched upon the parts played in the invention of the electronic computer by John von Neumann, at the Institute for Advanced Study, and Alan Turing, who received his Ph.D. from Princeton, he could not help mentioning that movie actress Hedy Lamarr—admired in their younger years by many members of the Old Guard for other reasons—invented some of the concepts underlying “Bluetooth,” the wireless connection system so many of us use with our computers, smartphones, and iPads. She also invented a way to guide torpedoes to their targets.

However, if our main goal is to live and enjoy the good life, perhaps—on Dean Wei’s recommendation—we should pause and pop a cork in thanks to Madame Berbe-Nicole Cliquot who, in 1805, invented “riddling,” a way to remove sediment from champagne by inverting the bottle so that the sediment settles toward the top of the bottle; then it was frozen in the bottle’s neck; then withdrawn very carefully.

As for all the other great inventions he not had time to mention, Emeritus Dean Wei had but one suggestion: