April 24, 2019
The Ecology and Evolution of Scholarly Publishing and
Princeton University Press's Niche 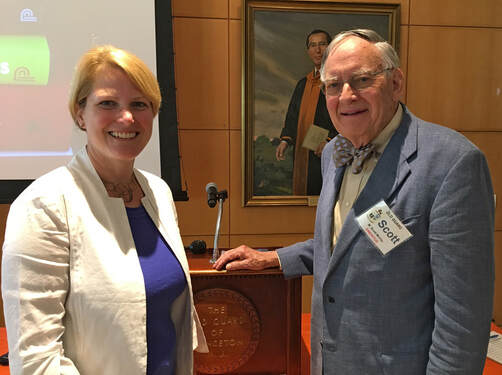 Minutes of the 28th Meeting of the 77th Year

President Coale called the 28th meeting of the Old Guard’s 77th year to order at 10:15 on April 24, 2019. Arthur Eschenlauer led the invocation, and Dr. Thomas Davidson read the minutes of the previous meeting.

Scott McVay introduced our speaker, Christie Henry. Ms. Henry was named Director of Princeton University Press 18 months ago and is the first woman to hold that position in the Press’s 113-year history.

Citing her long scientific background, Ms. Henry took a taxonomic approach to help us understand the ecosystem within which university and scholarly presses like Princeton exist. Starting at the broadest level (the publishing kingdom), she quickly took us down through phylum, class, and order, to the family (university presses), genus (large and small), and finally to species (individual presses themselves).

She noted that the family of university and scholarly publishers together publish over 14,000 new books and 1,200 journals each year. The Washington, DC, based Association of University Presses has 143 members.

At the genus and species levels, differentiation is large. Size and title output are major factors – most presses are small having under a few million in sales. With sales of about 30 million and over 200 new titles each year, Princeton is among the very largest.

Press species vary by both subject matter– academic disciplines like computer science, history, or biology - and by program type – monographs, text books, reference works, journals, or regional studies, for example. They vary, as well, in their habitat: There are examples of the species in China, Africa, Europe - all over the world. Authors’ types are widespread: Most are academics, but journalists, novelists, and poets can also be found. Many Nobel laureates can be found among them as well.

One of the most important ways university presses differ is governance. Some are separate university departments, some are part of the library system, and some lie within the university’s communications apparatus. Princeton is unique, as it is completely separate from the university with its own offices, infrastructure, and endowment. Governance is exercised by an administrative board of trustees made up of university officials, an editorial board comprised of faculty leaders from a wide variety of disciplines, and experienced individuals from the world of commercial publishing.

There is one way, however, in which university presses are all the same. Woven into their common DNA is the commitment to peer review. At Princeton the journey from concept to finished book has many steps, but the most important of them involve the editorial board and peer review. Board members review 25-35 manuscript proposals each month. It’s a lot of work but generally regarded as an honor. Many say these meetings are the best interdisciplinary seminar on campus. Once the full manuscript is received, it is sent out to carefully chosen reviewers who write detailed constructive critiques. These are then passed to the author for consideration.

Ms. Henry then went on to describe the types of books published by the Princeton University Press. At the most specialized level is the monograph written by an academic expert. These are highly technical books that represent the frontiers of knowledge in a given field, and, while they generally sell in very low numbers at very high prices, they represent the academic excellence that forms the basis of the press’s reputation. Other common book types are course books, reference books, and trade books positioned for a general audience.

There are ecosystem threats, of course, and Ms. Henry enumerated some of them. This is non-profit publishing, and non-profit often means financial losses. These must be born by the host universities, which themselves are often under pressure. Scholarship and the dissemination of knowledge are invaluable commodities, but hard to quantify when in competition for scarce resources. Ms. Henry noted the average press subsidy lies somewhere between 200-400 thousand dollars – less than the cost of a first-class football coach.

Other issues involve the shrinking attention span and commitment to immersive reading, driven by the rise of social media; the rise of Amazon.com to a concentration of customer power; and, lastly, the emergence of “open access.” This concept has at its core the notion that knowledge ought to be free and university presses should not charge for their content. The siren song of a free lunch dies hard.

Despite threats, the future for the university press is a bright one. Princeton University Press has an endowment that protects it from financial stress and serves as an incubator for new ideas. Global initiatives in the United Kingdom and China are providing new markets for our publications, and, just as importantly, new authors and partnerships are providing exciting new streams of intellectual and creative material.

By the time she opened the floor to questions, Ms. Henry had left us with a clear and comprehensive picture of the university and scholarly publishing ecosystem as well as a buoyant sense of Princeton University Press’s future in that space. To paraphrase one of her questioners, “I came here this morning knowing absolutely nothing about university presses. Now,” he remarked, “after this wonderful talk I know enough to be dangerous.”  So now do we all.
​
Respectfully submitted,
Patrick Bernuth