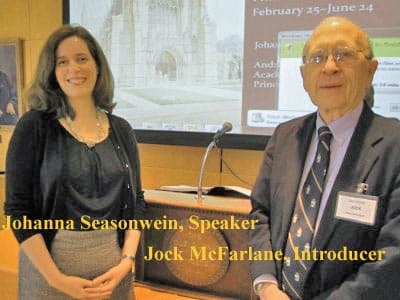 Minutes of the 30th Meeting of the 70th Year
he April 25 meeting of the Old Guard of Princeton was called to order by President Bob Varrin at 10:15 am. Don Edwards lead the invocation and Bob Craig introduced his wife and guest, Dr. Charlotte Craig. The minutes from the April 18 meeting were read by Letitia Ufford.

Jock Macfarland introduced the speaker, Johanna Seasonwein, art historian and curator for ”Princeton and the Gothic Revivial,1870-1930” that is currently on view at the Princeton University Museum. Dr. Seasonwein holds degrees for Johns Hopkins and Columbia Universities and serves as faculty and student liaison to the University and she coordinates the summer internship program. The exhibit is her first as lead curator and she is the author of the accompanying catalog.

Our guided tour began what she described as a… Tale of Two Windows at the entrance to the exhibit space. The windows were part of the decorative motif for Marquand Chapel the earliest example of classic of the Medival Gothic architectural style on the campus. The chapel, the third prayer space on the campus, was the gift of Henry Marquard a philanthropist ands arts patron who’s son Allen would become the first art historian and director of the first university museum.

It was noted that Marquand Chapel was built at the request of president James MaCosh who wanted a building large enough to accommodate all the  students and engender reverence and comportment among the attendees  who were required the attend chapel sessions.

Marquand Chapel was destroyed by fire in May of 1920. The windows on display are replicas of the original depiction of the biblical friendship of Jonathan and David. They were given to the university by the Cooper Union Museum in 1930 and in storage until this exhibit.

Before proceeding to the highlights of the exhibit , Ms Seasonwien reminded us the characteristics of the High Gothic style: pointed arched windows and doors, flying buttresses, stained glass windows, colonnades and elaborate towers that were the preferred design elements for cathedrals , abbeys and monasteries in Europe and France in the 14th and 15thcenturies. The Gothic Revival movement of the late 1800 and early 1900s continued many of the elaborate decorative elements with adaptations to meet modern material and economic taste.

The Gothic Revival style was embraced by McCosh and his successor Woodrow Wilson who wanted to create a learning environment based on the great European universities Cambridge and Oxford.

The first building constructed in the High Gothic was the Chancellor Green Library in 1881. Shortly thereafter the department of Art and Archeology was established and the new department of Biological Studies was formed.

This was particularly unique in the Department of Art and Archeology. The exhibit displays a small alabaster tablet and a bone and ivory casket that could be handled and examined by the students. These objects were purchased and donated to the university by Allen Marquand (the son of aforementioned benefactor) as real examples of medieval art.

The Art Museum and the Bio Studies Buildings were dismantled to make space for Firestone Library and the University Chapel. The only remaining building in the Romanic Revival on campus is Richardson Auditorium.

The centerpiece of the exhibit was the design and construction of the University Chapel.  Conceived at the time of the celebration of the 150th anniversary when the College of New Jersey was rechristened Princeton University, the chapel building was completed in 1928. The style refers to a variety of medieval architectural elements from the colleges at Oxford and Cambridge. It was at the time the second largest university chapel in the world and it continues to serves as one of the iconic images of the campus.

The exhibit includes several sketches by the designer and a beautiful watercolor image that serves as color illustration for the overall project.

Ms Seasonwein ended the talk with a commentary on the development for the design and location of the Graduate College. The narrative was a test of wills between President Wilson and the dean of the Graduate College, A Fleming West. They disagreed on the location of the college buildings and some of the key window designs. West’s preference to build near the golf course prevailed. Ralph A Cram was again the architect but he was overruled for the design of the window in the dining Hall. The building was named for Cooper Proctor, a university benefactor. The dining hall modeled on one at Christ Church, Oxford and reminiscent of the design for Hogwarts in the Harry Potter films. An independent designer was selected to develop the theme and subject models for the large window that is considered as an outstanding example of Gothic Revival movement on the campus.

Ms Seasonwein responded to questions related to the authentic of stories about the origins of certain gargoyles (they are not true) and the popularity of the new Whitman College in a modified Gothic design.

"Princeton and the Gothic Revival" is on at the Museum until June 24.