From Day to Day:
One Man's Diary of Survival in
Nazi Concentration Camps 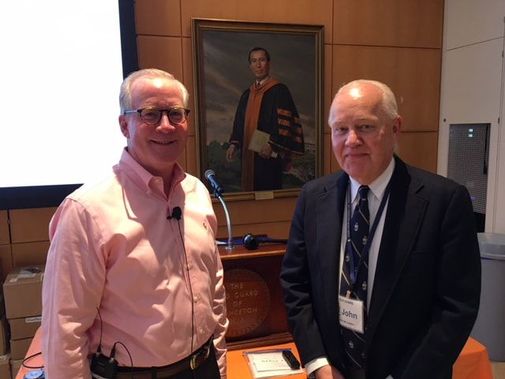 Dechert LLPJock McFarlane called to order the 28th meeting in the 76th year of  in the invocation and guests were introduced: Rob Coghan by John Cotton; Hazel Stix by Harold Borkan; Jim Healy by Mark Branon.

Claire Jacobus reported for the nominating committee, and with thanks to Charles Clark, presented a full slate of officers of the Old Guard for the year 2018-2019: their names being attached to these minutes.

Roger Mosely read the minutes of the previous meeting, and John Cotton introduced the topic of the day and our speaker, “From Day to Day: One Man's Diary of Survival in Nazi Concentration Camps,” by Timothy J. Boyce.

The speaker described a process of discovery that began as he was reading the memoirs of Thomas Buergenthal, who, as a 10-year-old Jewish boy, had been imprisoned in Sachsenhausen, a Nazi concentration camp. Mr. Buergenthal wrote a memoir, “A Lucky Child,” because, while having had some of his toes amputated for frostbite, he had been befriended by a Norwegian prisoner, Odd Nansen, who was visiting the death camp’s infirmary.

Nansen, struck by the boy’s angelic face and moved by his suffering, used the somewhat more generous food supplies given to Norwegian prisoners in that camp to bribe orderlies to care for the boy. Nansen also used his food rations to buy pencils and  onion skin paper to keep his diary, published after the war under the title “From Day to Day”: a compelling, lucid and humble account of a fascist universe, hidden for over three years in the privy and smuggled out of the camp inside the breadboards of Norwegian workers.

Following a footnote in Mr. Buergenthal’s memoirs, Mr. Boyce began to read Nansen’s three-volume diary of the fascist assault on any form of human decency. Entitled to life and to domination were the Aryans; they alone could determine the fate of all others under their control. Next were the Norwegians, who were entitled to somewhat larger rations than the other prisoners and could use those as a form of currency or a bribe to ensure their own survival or that other prisoners. Nansen himself was one of the 20 Norwegians so prominent as to have been singled out for arrest by the Gestapo. The son of Fridtjof Nansen, a Norwegian statesman, high commissioner for refugees, and recipient of the Nobel Peace Prize, he himself had founded the Nansen Relief Organization.

Somewhat less fortunate were German guards who had broken the rules and were consigned to the Jewish quarters of the camp, where, with the few Jewish prisoners given a modicum of authority over other Jews, they routinely savaged the most defenseless. As the Jewish inmates came close to death, whether through starvation, infection or execution, they were stripped both of hope and of their own religious identity. They were called Musselmen, simply Muslims.

Despite the advantages of being Norwegian, Odd Hansen knew from the outset that he could have been executed had he been disrespectful of the Nazi guards, or had been loyal to Norway, or was caught listening to the BBC, or if the Nazis found him writing journal entries addressed to his wife, Kari. His hold on life was further weakened when 19 of the elite Norwegian prisoners were released from the camp. Nansen was detained, perhaps because as a free man he had opposed the fascist collaborator Quisling.

When Nansen and the young Tommy Buergenthal had to part in 1945 as Nansen was moved to another camp, Nansen asked Tommy to write to him after the war. The boy responded that indeed he would. It was his duty. Nansen replied that he longed for a day when Tommy’s fellow creatures would think as much about their duty to him as he did of his duty to them, and Nansen left him with this blessing: May there be such a future in store for you that all this frightful and unintelligible cruelty will be expunged from your mind…May you become what you were meant to be.

For a few more years, however, and until the eighth grade, Tommy Buergenthal would remain illiterate, as in the ghetto his parents could have been killed simply for teaching him to write. Nonetheless,  Mr. Buergenthal later took a master’s degree in human rights from Harvard, where he was the class valedictorian, served on the International Court of Justice and taught Law at George Washington University. Nansen himself later received many honors, including being named a special director of Unesco and is credited having had a role in the founding of Unicef.

What, then, kept Nansen from succumbing to despair, from losing the vital spark of his ideals, from letting his kindness freeze, and from surrendering any hope for the future?
There were only two ways to fight fascism in that camp, by acts of sheer human decency and by putting the horrors of the death camp in writing. Nansen documented his visits to Jewish prisoners to get their stories: a task more essential because, unlike the Norwegians, they had little hope of getting out alive. On one occasion, Nansen had been witnessing German soldiers beating Jewish prisoners to death, one victim, just before collapsing, put his hands on Nansen’s face, whispering “You are a decent man.”
Nansen’s later confided in his diary, “If only I could be a decent man.”