Critic in the Musical Ecosystem 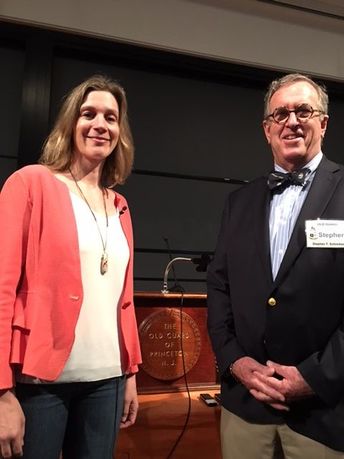 Corinna da Fonseca-Wollheim and Stephen Schreiber
Minutes of the 30th Meeting of the 75th Year
The 30th meeting of the Old Guard’s 75th year was called to order in the Andlinger Center by President Jock McFarlane with 99 in attendance. Joan Fleming led the invocation. Lee Neuwirth read the minutes of the previous meeting. Owen Leach introduced his guest, Donald Sanborn. Marue Walizer introduced her guests, Scott Burnham, Mike Gehret and Marna Seltzer.

Claire Jacobus, the Nominating Committee chair, presented the names of Old Guard members nominated to be officers and committee chairs for 2017-2018.

Stephen Schreiber then introduced the speaker, Corinna de Fonseca-Wollheim.  Born in Europe, she holds a Ph.D. from Cambridge. A violinist and a passionate chamber musician, she has been a contributing classical music critic for The New York Times since 2012.  Her articles have also been in many other publications.

Ms. Fonseca-Wollheim began her talk, “The Critic in the Music Ecosystem,” with a personal story from a train trip with her son and a nephew. Through the windows they saw a couple kissing in another train car. One of the boys asked “What are they kissing about”? The speaker went on to say that “what” is also what she focuses on as a music critic -- the performance itself. One concert, one moment. What is this exhilarating, ephemeral event about? There is a story there.

You don’t need a music critic to write about the brilliance of a Mozart symphony or walk you through the progression of a Beethoven sonata, she said. Today that is done in music appreciation courses and high-quality program notes.

Noting that music changes with the times, Ms. Fonseca-Wollheim focuses her columns on the artist’s current interpretation of a human experience that may have first been experienced years ago. How does the contemporary performer color the resolving chord or chords of a Mozart composition? Does the performer express reluctance, relief, regret?  The words she uses to describe that are not an exact science.

In her train story, for example, did the kisses represent passion, reconciliation, saying goodbye, charity? One doesn’t know the real story but can glean what it might be about by following clues.Was one of the couple’s eyes closed or open?

Continuing the notion of music changing with the times, the speaker noted that critics’ columns can open up listeners to contemporary music. Her columns have mentioned music containing odd noises; clicks of fingers; sounds from nature; grating and crunching that suggest the violence the instruments suffer through; an operator at an audio control panel playing with the musical sound, coloring the effect.

Fast forward to today. There is a concern that classical music is dying. There are worrying symptoms: labor disputes and bankruptcies at musical organizations; the concert ticket subscription model is dying; recordings are an endangered species as more listeners stream music.

Ms. Fonseca-Wollheim observed that economic changes in the newspaper business had affected the length of her columns. They have become shorter and shorter over time.  She wondered if professional music critics were becoming an endangered species. She cited an article that said Texas now is a “music critic free zone.” Newspapers in Dallas and Houston no longer have music critics. Many social media users now weigh in on-line with music criticism.

She speculated on what could happen if there were no professional music critics. Who would provide disinterested feedback? Who would encourage a promising new artist?  Who would tell  an over the hill performing artist when it might be time to step aside to let younger artists of promise move ahead?

She said she attends 100 concerts a year and had been at concerts where the audience clearly loved the performer, while she had thought the performance not up to par. She wondered if audiences were really applauding their memories of how the artist had performed in the past.

She also wondered how audiences would learn of new artists and coming programs and who would advocate for new elements too fragile for the market. Such advocacy can make an astonishingly positive difference in a composer or performer’s career. One of her columns led to more bookings for a newer performer and to a second contract with a major record company.