What Stars Are Made Of:  The Life of Cecilia Payne-Gaposchkin 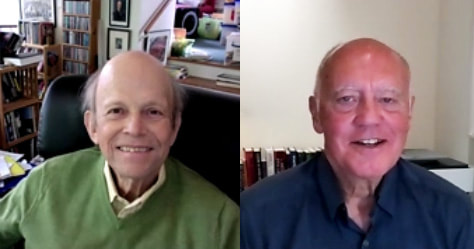 Henry Von Kohorn, Chair of the Nominating Committee, read the slate for the Executive Committee and Committee Chairs for 2021-2022.

Lanny Jones introduced the speaker, Donovan Moore, journalist, radio host, financier, and screen writer. Moore came to his subject at a serendipitous lunch with Lanny who showed him a photograph from a course he had audited. The photo had three subjects – Aristotle, Newton and a portrait of a woman. The woman was Cecelia Payne-Gaposchkin, who became one of the most important female scientists of the 20th century. Her discovery – that the main element of stars is hydrogen – changed our understanding of the universe. Unbelievably, no one had written a book about her.

Cecelia was born in Wendover, England in 1900. As a student at St. Paul’s School for Girls in London, her curiosity, intellect, and love for science were nurtured.  “I shall never be lonely again,” she wrote in her autobiography. “Now I can think about science.”

Cecelia was accepted at Cambridge University on a full scholarship in 1919.  She majored in botany but switched to physics, after hearing a lecture by Arthur Eddington, Director of the Cambridge Observatory, on his recent observations of a solar eclipse.  “For three nights, I think, I did not sleep. My world had been so shaken that I experienced something like a nervous breakdown.” In addition to physics, she took all the astronomy courses that she could, studying at the renowned Cavendish Laboratory.

The head of the Cavendish was Sir Ernest Rutherford, who had won the Nobel Prize in Chemistry a few years earlier. Cecelia was required to sit in the front row. Rutherford began each lecture with the salutation “Ladies and Gentlemen” and all the boys regularly greeted this witticism with thunderous applause, stamping their feet in the traditional manner. At every lecture she wished she could sink into the earth. She was told that she could never be anything but an amateur. Nevertheless, she persisted.

At the end of her Cambridge years, Cecelia heard a lecture by the American astronomer Harlow Shapley.  With no prospects for a career in England, she wrote to Shapley, seeking a place at the Harvard Observatory. He responded with a one-year fellowship and a $500-dollar stipend.

Physics, as a scientific field, was coming into its own and merging with other fields for dramatic discoveries. Could Cecelia fuse physics with astronomy to better understand the universe? At the Harvard Observatory, Cecelia joined several other women. Their job was to observe and catalogue every star in the known universe on glass plates. Known as “computers,” this quirky crew became Cecelia’s family. Cecelia wanted to become more than a mere cataloguer. She wanted to analyze the data. Those stellar spectra on glass plates were “like a million jigsaw pieces waiting for someone to put them back together.”

She described the glass plates as “tiny parallel smears” but saw a pattern. She observed a relationship between ionization levels and temperature and noted that stars were mostly composed of hydrogen.  This was scientific heresy at the time. The scientific establishment thought that stars were composed of the same elements as earth and in roughly the same proportions. Henry Norris Russell, the Director of the Princeton Observatory and the dean of American astronomers, read her thesis and warned her that her conclusions were impossible. In order to get her thesis accepted, she needed to hedge her conclusions.  She described her findings as “almost certainly not real” but her words were “crafty” according to one historian of science.  She put a marker down that she was the first to make this observation, right or wrong. Nevertheless, in later life Cecelia regretted that she could not have been more forthright in her conclusions.

Four years after her thesis was published, Norris Russell conceded that stars were largely made of hydrogen but buried the conclusion at the back of a scientific paper. Russell got the credit for the discovery, nonetheless.

At a conference, she met Sergei Gaposchkin, a fellow astronomer, who was an admirer of her work. They were married in 1934 and had three children. She continued to teach at Harvard but remained relatively anonymous. Abbott Lawrence Lowell, the President of Harvard, told Shapley that because she was a woman, “Miss Payne should never have a position at Harvard as long as he was alive.” In 1954, Donald Menzel replaced Shapley as the Director of the Harvard Observatory. He doubled Cecelia’s salary and, with Lowell gone, she was named a full professor. A lifelong smoker, she died of lung cancer in December 1979.

Moore described his book as “Downtown Abbey meets Hidden Figures,” and told the Old Guard that a production company has optioned the film rights. Who knows…we might even get to see the movie!
​
Respectfully submitted,
Jane Silverman