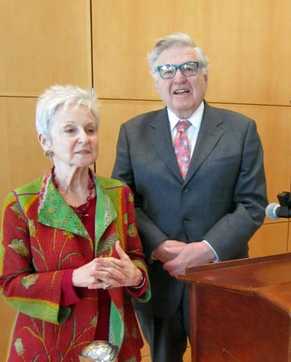 Membership Committee Chair Arthur Eschenlauer conducted the election of new members as presented in the slate provided to the members on April 22, 2015.  The proposed new members were elected.

President  Leach announced that there will be a regular meeting of the Executive Committee on Wednesday, May 6, 2015 at 1:45 p.m. in the gun room of The Nassau Club.

Mr. Del Tufo started with the Wikipedia definition of a grand jury as a legal body empowered to conduct official proceedings to investigate potential criminal conduct and to determine whether criminal charges should be brought. A grand jury may compel the production of documents and may compel the sworn testimony of witnesses to appear before it.

The history of grand juries starts in England in 1161 when King Henry II wished to have the King’s law override both ecclesiastical and feudal courts and convened the Court of Assizes to meet annually to hear complaints or accusations of crimes. Accusation before the grand jury was tantamount to conviction, and trial was by physical ordeal. The Church abolished trial by ordeal sometime later.

In 1215 King John of England signed the Magna Carta which states that due process of law is the law of the land. In 1681 a court decided that there would be no polling of grand jury members as to their opinions and votes and that the proceedings of grand juries would remain secret, as they have to this day. The idea of the grand jury was that a group of persons must hear evidence regarding a complaint of criminal wrongdoing and decide whether probable cause exists to bring an indictment for a crime, which will be tried by a court. The sovereign, king or government, cannot on its own bring an indictment under the laws for criminal offenses.  Mr. Del Tufo recommends our looking more deeply into the Magna Carta as a remarkable and relevant document.

Grand juries in North America did not favor the sovereign or crown and upheld individual rights by refusing to indict persons who flouted the Colonial laws imposing stamp and other taxes. In 1743 Peter Zwinger from New York was not indicted for speaking against the Colonial government, Aaron Burr was not indicted for treason although President Jefferson wished him to be, and persons running afoul of the Alien and Sedition Acts of President John Adams were not indicted.

The Federal Constitution and many State Constitutions require grand jury action before indictments, for the Federal government in all felony accusations and in New Jersey for all criminal accusations.

A grand jury is sui generis, not subject to review by any other body.  Its proceedings are private and secret; the rules of evidence do not apply, witnesses are not represented by counsel; it has the power to subpoena witnesses and documents and to hold persons in contempt and incarcerate them. There are usually 23 members of a grand jury, of which 16 is a quorum with 12 vote needed to act.

Mr. Del Tufo says a major ongoing dispute is whether a grand jury MUST indict if sufficient evidence is presented to establish probable cause that a law has been broken OR whether the grand jury has discretionary power not to indict in any such case. Opinions and statements are many, but he thinks that the Founders meant the grand jury to maintain the discretionary power it exercised in Colonial times.  The problem with such discretion, however, is that there are no rules limiting or defining it.

All in all, Mr. Del Tufo thinks that, despite the drawbacks  of prosecutor domination or leading and other misconduct, that the idea of the grand jury as a group of citizens that must agree to the bringing of an indictment for a major crime is foundational and should be retained.