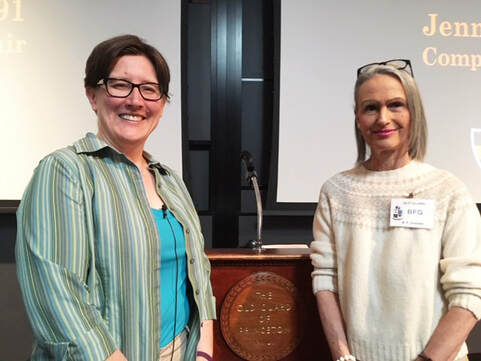 Minutes of the 25th Meeting of the 77th Year

The call to order for the Old Guard of Princeton's 25th meeting of its 77th year on April 3, 2019, was made by Stephen Schreiber. Arthur Eschenlauer led the invocation, and Patricia Taylor read the minutes of the previous meeting.

Our speaker for the April 3rd meeting was Professor Jennifer Rexford, whose talk was entitled “Making the Net Work.”

Professor Rexford is the Gordon Y. S. Wu Professor of Engineering and Chair of the Computer Science Department at Princeton University. She earned a Bachelor of Science in Electrical Engineering in the Princeton class of ’91 and a Ph.D. in Electrical Engineering and Computer Science from the University of Michigan in 1996. She also held research positions at the Naval Research Plasma Physics Lab and the AT&T Bell Laboratories Mathematics Center.

Professor Rexford started out referring to a discussion she had on “fixing” the internet, where the comment was made, “I didn’t know the internet was broken.” Well, of course, it is working, but with 100 billion billion bytes of data per month flowing through it, we see the internet’s frailty through issues like website unreachability, outages, halting video streams, denial of service disruptions, cyber-attacks, and more.

At 40 years old, the internet started out as a “best efforts” delivery mechanism for which no one could have foreseen e-commerce, video streaming, online gaming and the like. Its growth and popularity have caused the issues that face us today. We need a global internet that is truly worthy of society’s trust.

Professor Rexford’s lab research is in the design and building of “self-driving” networks. Self-driving networks can sense what is going on in the network through automated collection and analysis of relevant data; modify traffic flow direction and speed based on automated decision techniques; and limit dependency on human interaction to higher level, longer term actions. Programmability enables that innovation. Intelligent switches that are programmable, together with smart processing algorithms that convert measurement into situational awareness, strike the balance between sophisticated control and a need for speed where switching decisions have to be made in two to ten billionths of a second.
During the 9/11 attack on the World Trade Center, the internet actually ran better. Why, because network administrators went home -- thus avoiding the human errors that cause many of the problems we face. Hence, less, rather than more, human intervention is definitely a requirement for the future.

The internet is really a global network of networks, having grown from four connected host computers in 1969 to over 60,000 connected networks today, with tens of millions of computers, network devices, and mobile phones linked to it, and billions of people who use it. In our lifetimes, the internet has transformed how we communicate, conduct business, form and sustain relationships, vote and govern, and even how we wage war. How do you make meaningful progress and change in the face of that complexity?

History has shown that making change through a standards process can be slow--five years or more—the real world changes faster than standards can be devised.

Working in conjunction with other research centers, the Princeton lab concentrates on a small number of internet “stakeholders” whose cooperation can have an outsized impact on network outcomes.

For example, Comcast and Google represent extremely heavy internet traffic flow. If they can come to an agreement on a path forward without needing the agreement of the roughly 60,000 others, significant progress can be made. Large buyers of internet equipment, such as AT&T, buy from vendors who include proprietary software with their equipment that can’t be changed. Working with such major internet players, the goal of internet programmability will be achieved by the people who run the network, not those who build the hardware.

Professor Rexford discussed Princeton’s participation with 60 companies and universities in the research into the P4 open-source programming language. It lets users dictate how networking equipment operates by means of processor chips in the intelligent switches – allowing “top-down” control rather than the current vendor-driven network control.

Professor Rexford also noted that as data packets flow through a particular switch, it can perform limited processing as the packets fly by and has limited memory to store results. The switch maintains a small “sketch” of its traffic that permits analysis of the conversations causing congestion and redirection of the flow of packets to alleviate congestion. Or, in the event of a denial of service attack on a website, it can identify the destination receiving exceedingly high amounts of traffic, thus pinpointing the victim without keeping information on all traffic.

As the internet evolves, programmability will be a major contributor, but Professor Rexford suggested that economic incentives, regulatory policies, and practical political measures will also be required to reach the finish line of self-driving networks in our lifetimes. Given our dependence on the internet, making structural changes will be like changing the wheels of the car while driving at very high speed!

There was a very lively Q&A session, which focused on a range of topics. Here are a few:

Q. While the “good guys” are improving control of the internet, aren’t the “bad guys” improving their penetration techniques equally as fast?
A. Yes. But we believe the intelligent switch model allows quicker detection and response to catch and fix a problem or stop an attack at the earliest possible stage.

Q. What paths and distances can a typical internet query take?
A. Professor Rexford lives one-half block from the Princeton campus. Her internet queries to the university network are sent to JFK Airport and back by her internet provider and because the University connects through a Philadelphia network, the query travels 200 miles!