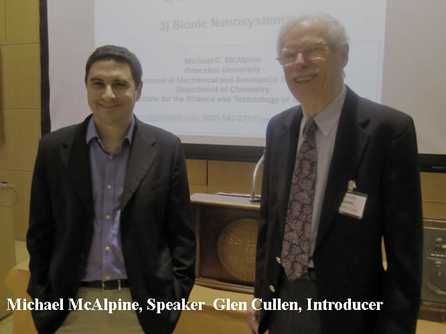 Minutes of the 28th Meeting of the 72nd Year
The meeting was called to order at 10:15 by the President, Ruth Miller. The invocation was intoned by Julie Clark. There were 85 people in attendance.

David Egger read the minutes of the previous meeting of April 23rd.

There were 3 guests. George Cody introduced Grazyna Meray and Betsy Smith introduced her son Brett Smith and his wife Nancy.

Glen Cullen introduced the speaker, Dr. Michael McAlpine, Assistant Professor of Mechanical and Aerospace Engineering at Princeton University. He graduated from Brown in 2000 and from Harvard in 2006 with a Ph. D. in Chemistry. He held a post-doctorate Fellowship at CalTech and in 2008 came to Princeton where his work is on bionic nano materials in biological and energy systems. Nano, from the Greek word nanos, meaning dwarf, is used to refer to dimensions of one billionth of a meter. The title of his talk was Bionicinterfaced Nanodevices.

Professor McAlpine said that he would cover three areas of application of bionic nanomaterials, Sensors, Energy and Systems.
1.  Sensors: Bionics is the application of electrical and mechanical systems to biological systems. An example of a mechanical system is an artificial knee replacement. Examples of electro mechanical systems are cochlear implants and heart rate monitors. These systems are based on metal and silicon materials which are hard and brittle, require high temperature processing and are in a sense two dimensional. Biological systems are soft and flexible, allow only low temperature processing and are three-dimensional.
The four basic requirements for a bionic system to be attached to the body are A material called graphene has been produced from Carbon. It has all the right qualities. It can be made in a layer one atom thick. It is flexible and it has tremendous adhesion. It has been used to make a bionic tattoo which if deposited on a tooth with an antenna of gold, could analyze the breath or saliva, detect bacteria or an oncoming asthma attack. So far it has only been deposited on the tooth of a cow.

2. Nano Energy: The use of bionic electrical instrumentation requires power. Thus far, as in the case of heart rate monitors, batteries have to be used and if replacement is necessary surgery is involved. The body generates 100 watts of energy in a day. It should be possible to use some of this power to operate electronic devices. Certain materials, called piezo-electrics, generate a voltage if placed under stress. If a piece of this material could be placed in the body on an organ that was continually flexing, enough power could be generated to run a small sensor. The piezo-electric material would have to be flexible and stretchable and work is going on to make it so by using thin layers and using buckling techniques. Devices have been made to generate power of the order of 1 microwatt.

3. Bionic Neuro Systems: If living cells and nano materials could be incorporated in the same structure useful bionic aids to human sensing and diagnosis could be developed. Dr McAlpine’s laboratory is working towards this by using what is called 3D printing, whereby cells, chemical polymers and silver particles are deposited on a substrate using an electronic printer similar to what we are use to print documents. So far he has printed a hearing aid on a cow’s ear and he demonstrated its operation in the lab (without the cow of course). Using this technique one could direct electrical signals to the brain bypassing the acoustic phase. If this could be done and implemented in the opposite direction too one would not have to listen to everybody’s cell phone conversations any more.

Questions were asked on subjects such as hysteresis (not much has been done), Printing an organ (a much more difficult process because of veins), injecting sensors into the bloodstream (possible in future), Life of cells in sensors (cells need nutrients) and application to veteran soldiers (need to match DNA).