Growing New Jersey`s Economy:
What Needs to Be Done 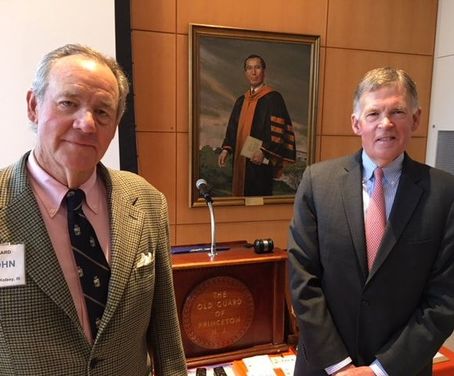 Demonstrating his versatility, John Kelsey delivered the minutes of the previous meeting and then introduced our speaker, Tom Bracken, President and Chief Executive Officer of the New Jersey Chamber of Commerce, who served as a top banking executive for more than 40 years before assuming the Chamber presidency in 2011. He addressed the question: “Growing New Jersey’s Economy: What Needs to Be Done?”

He began by observing that cause for considerable has happened in the last six years -- state revenues are down while our needs continue to increase. It’s time for a reality check.

If New Jersey were a country, he said, its gross domestic product would place it 24th in the world. Among the states, only three others attract as much foreign investment.  New Jersey’s location is the most economically advantageous in the nation. Its ports are among the country’s busiest and it has one of the highest concentrations of biotech and pharmaceutical firms in the United States. It is among the top two or three states in affluence, level of education and quality of life.

On the other hand, the current rate of our economic growth is one of the slowest in America. He asserted that New Jersey’s rate of out-migration, particularly of upper-income households, is currently No. 1 in the country. Its taxes are also the nation’s highest, yet it has the nation’s second lowest state credit rating. The level of state indebtedness has increased by 150 percent in the last five years and amounts to $25,000 per resident.

While New Jersey places among the most blessed in many of its economic advantages, it ranks near the bottom in its public management -- some of which can be explained by the extreme fragmentation of functions and responsibilities among 565 municipalities, 610 school districts and a host of special authorities.

How do we get out from under all this?

Our main priority, Mr. Bracken said, should be to focus upon reigniting growth in the state’s economy. We can achieve that, he added, only by improving the state’s affordability and competitiveness. We cannot continue to fund debt service through refinancing. That’s like using a mortgage to buy groceries. We need to begin to pay off debt, and that can only be done through enhanced growth.

He said Governor Phil Murphy’s current budget proposal focuses on expanding aid to schools and higher education, improving transit and helping the middle class and working people, financed by higher taxes on the most well-to-do and business -- worthy goals, but they don’t help us climb out of this deep hole of  debt, unaffordability and lack of competitiveness.

Mr. Bracken said that the top 1 percent of the state’s households in income already pay 42 percent of New Jersey taxes. Households with over $300,000 in income pay 62 percent of total taxes. Increasing levies on those taxpayers will only spur out-migration of this key component of our tax base.

When we should be empowering and motivating innovation and entrepreneurship, he asserted that increasing taxes on businesses will spill over into small Chapter S corporations, many of which are individual, small family enterprises, and new start-ups. On top of this, we are mandating other increased costs on business. While the New Jersey Chamber of Commerce endorses pay equity across genders, the state government wants to be a national leader and mandate adjustments going back six years, rather than two years. It also wants to mandate 40 days paid sick leave. Putting all those items in place in one sudden jolt will abruptly increase business costs compared with those in other states and further reduce New Jersey’s competiveness.

All this is compounded by what Mr. Bracken termed the “Washington, D.C. vendetta” against New Jersey and other high-income states by capping state and local tax deductions at $10,000 and withholding financial support for the critically important Gateway tunnel. New Jersey already ranks at the bottom among the states in the amount of federal aid received as a percentage of the taxes it sends to Washington each year.

In order to improve New Jersey’s affordability and economic competitiveness, Mr. Bracken proposed a major shakeup of priorities. We need a plan, he said. New Jersey has no strategic plan. As a template, he suggested that we build on experience with the recent Transportation Trust Fund Task Force, which he chaired and which proposed the increased gas tax that has re-charged that once-bankrupt fund. “Let’s do it again,” he said, with a broad coalition representative of all key interests in the state.

A top priority must be to renovate and expand our infrastructure, the key to capitalize on our strategic location. The long-run price tag to renovate our deteriorating water systems alone will be over $1 trillion.

Let’s offer incentives for millionaires to move in instead of moving out, he continued. As part of the Transportation Trust Fund legislation, he said, we eliminated the state’s estate tax -- the nation’s highest -- so that helps.

As a first step to help reduce property taxes, he proposed a shift from “platinum” to “gold” health care benefits for state, local and school district employees -- a level of benefit many of the largest employers in the state offer their workers. This could cut state and local tax bills by several billion dollars over the coming years.

Mr. Bracken then proposed that the state government promote and facilitate municipal and school district consolidations, such as that achieved by Princeton -- the best way, in his opinion, to cut the number of high-cost administrators and duplicated services. We cannot increase revenues, he argued, without improving efficiency.

We do not need to do, and cannot accomplish, all of this overnight, he concluded. Much can be done incrementally, but we need to start and send the right signals as soon as possible. We need to strategize, set priorities, and undertake a major management, structural and financial workout, possibly using a broadly representative task force like that we employed to rejuvenate the Transportation Trust Fund.

In response to a question about whether other states have undertaken such a workout, he cited Massachusetts and suggested that New Jersey take a hard look at what the Bay State has accomplished.

In response to a question about New Jersey’s efforts to attract business with substantial tax credits, he replied that, while New Jersey offers five times the tax credits of the next competing state, only $100 million out of $9 billion in extended credits actually have been earned so far because recruited firms have yet to yield the economic impacts required to earn the credits. Mr. Bracken said that we might be better advised to allocate the $7 billion in tax credits offered to attract Amazon to Newark to construction of the Gateway tunnel instead.

Responding to another question, he added a few optimistic notes. He said Governor Murphy is a very decent man who will quickly learn the realities of the situation and respond. Mr. Bracken said he finds Steve Sweeney, president of the State Senate, to be very knowledgeable about and dedicated to the best interests of the state. Recent reductions in the federal corporate tax help. And there appears to be a series of legislative channels in Washington through which federal funding for the Gateway tunnel can be obtained incrementally.