What Works in Education? Lessons from Charter Schools 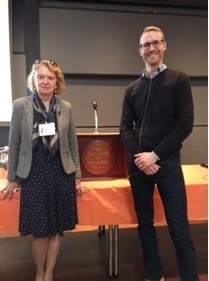 Miquelon Weyeneth and Will Dobbie
Minutes of the 27th Meeting of the 75th Year
The April 5, 2017, meeting was gaveled to order at 10:15 a.m. by President Jock Mcfarlane. The invocation was led by Julia Coale. David Wetherill introduced a guest, his wife, Pamela.

This morning’s talk, “What Works in Education? Lessons From Charter Schools,” was given by Will Dobbie, an Assistant Professor of Economics and Public Affairs at Princeton University who was introduced by Miquelon Weyeneth.  Professor Dobbie grew up in Kalamazoo, Mich., attended Kalamazoo College and the University of Washington and earned his Ph.D. degree in economics and public policy at Harvard in 2013.  He is affiliated with both the economics department and the Woodrow Wilson School and is also associated with the university’s program in industrial relations.

Professor Dobbie began his talk by asking why an economist like himself would be interested in schooling, especially charter schools. In recent comparisons between 15-year-olds in the United States and 25 to 30 other countries, the United States was a good bit worse in mathematics than one would expect. In his remarks, he observed that here in America we spend a lot of money on “mediocrity”! In major cities around the country, 20 percent to 50 percent of charter school attendees are black or Hispanic and not a single city is doing nearly as well teaching English as is the case with mathematics.

Professor Dobbie observed that in the United States we seem to be spending more money on the cost of schooling, generally, but with fewer increases in academic progress for the most part. There are, of course, exceptions across the country, and a few programs, like “Teach for America,” “Nurse Family Partnerships” and “Head Start” have been tremendously successful. Most public school endeavors, on the other hand, have been generally ineffective.

There are several initiatives that appear to result in more effective schools -- specifically encouraging teachers to have a greater impact --and a variety of promising student and teacher initiatives. The “Harlem Children’s Zone” initiative, for example, has succeeded in achieving major improvement in local school and community programs with over $40 million in innovative investments. The institution of lotteries has helped students qualify for Charter School enrollment. As a result, there have been significant gains in mathematics over the last three years but with little progress in English.

Also, the institution in recent years of more effective evaluations of principals, teachers, students, lesson plans and school expectations have been important. Among the significant discoveries are that charter schools with small classes seem not to do as well as larger classes with greater interaction, that longer school years -- as is the case with Chinese, Japanese and Scandinavian schools -- are in many cases a plus, and that effective tutoring (more common in charter schools) can have more immediate and positive results.  More than a few of the charter schools in the New York metropolitan area experience improvement each year, and the results in the Boston area, for example, are very similar.

It’s interesting also that the best practices in charter schools are often increasingly effective in public schools. In New York City, for example, there is evidence that good practices have the effect of upgrading poor teachers to mediocre levels and above. In many cities, efforts are underway to urge more public schools to adopt some of the best practices of charter schools. And in many cities, there are sharp reductions in pregnancies, significantly fewer incarcerations of students from charter schools with the stricter guidelines, and fewer concerns about student persistence or laziness.

Among Professor Dobbie’s conclusions was the belief that well-managed charter schools over time will result in better student outcomes, may attract many more students in the years ahead, and have a positive influence on public schools with dismal records of performance.

A number of questions were posed during the Q&A session, including the following:
After a very informative talk, followed by the lively and thoughtful Q&A, President McFarlane thanked Professor Dobbie for addressing the Old Guard of Princeton and adjourned the meeting at 11:30 a.m.