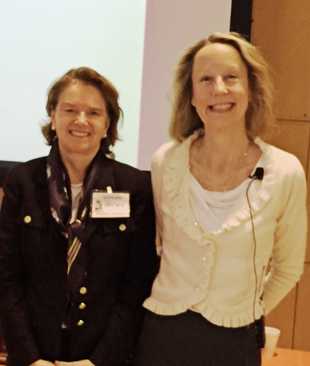 Miquelon Weyeneth, Introducer, and Anne Case, Speaker
Minutes of the 27th Meeting of the 74th Year
The 104 members and guests in the Friend Center were called to order at 10.15 a.m. by President Owen Leach. The invocation was led by Julia Coale. Minutes of the March 30 meeting were read by Helen Hamilton.

John Frederick introduced his guest Susan Pevin, and Landon Jones introduced his wife, Sarah Jones.
Arthur Eschenlauer made an announcement on behalf of the Membership Committee.
The next regular meeting will take place on Wednesday April 13 at 10.15 a.m. in the Convocation Room of the Friend Center.

The speaker will be Susan Hoskins, executive director of the Princeton Senior Resource Center. Her topic will be “Do We Live in an Age-Friendly World?”

Anne Case started her talk by mentioning that her research was conducted jointly with her husband Angus Deaton who coincidently won the Nobel Prize in Economics at about the same time the results of this research were published.

There has been a remarkable long-term decline in mortality rates for middle-age and older adults in the United States during most of the 20th century.

But something happened in the 1990s when this virtuous trend of declining mortality rate stopped and started ticking upward.

She then overlaid a red line showing the mortality rate of the similar aged (45-54) United States white population, which had also been declining like the other countries (albeit at a slower rate) till the end of the 1990s. That red line suddenly changes direction and increases by about 0.5 percent a year.

Interestingly the mortality rate of Hispanic and black Americans did not follow the same pattern as white Americans and behaved in the same fashion as all of the sister countries mentioned above.

Hence the jarring title of this presentation. Is 50 the new 80?

Professor Case then looks at the causes of death as listed on the death certificates which, in descending order of magnitude, are cancer, circulatory disease, external causes, respiratory diseases and diabetes.

External causes jump by 50 percent from the late ’90s to 2014. All the other causes of death see declines.

Professor Case showed a remarkable series of 35 annual graphs from 1979 through 2013 depicting deaths due to external causes for both men and women.

The earlier years had essentially zero deaths. The lines start moving for both men and women in the ’90s, gathering momentum especially for those aged 44-54 to this day.

The Centers for Disease Control reports that 1 in 25 Americans now uses prescription painkillers for nonmedical uses.

The late ’90s saw the introduction of OxyContin, a synthesized opioid initially marketed as a nonaddictive drug. This class of drugs is highly addictive and its misuse can cause death, especially if combined with alcohol, a frequent occurrence.

There has been a slow movement to restrict prescriptions of opioids in the face of this looming epidemic. Insurance companies are also realizing that opioids do not relieve pain in the long run and can be highly addictive. Doctors need to be educated too.

But people are now switching to heroin, which has a lower price than prescription drugs or marijuana.

Putting the puzzle together
We see a dramatic increase of deaths of despair in every age group except elders.
It’s happening to both white men and white women
It’s happening mainly for whites with a high school education or less
It’s happening indiscriminately in all regions of the United States
It’s not happening for blacks or Hispanics

This extraordinary increase in deaths of despair was accompanied by a general deterioration of self-reported health status.

More people are claiming disability benefits and the United States is witnessing overall falling productivity. About 10 percent of middle-age Americans are not working, when middle-age should constitute the best earning years ahead of retirement.

Why this upsurge in mortality and morbidity?

The proximate causes are drugs, alcohol and suicide. But what are the underlying causes?
The meeting was adjourned at 11.30 a.m.
​
Respectfully submitted,
Miquelon Weyeneth