Climate as We’ve Known It Is a Thing of the Past:
Navigating to Avoid a Dangerous Climate
​
Michael Oppenheimer
Albert G. Milbank Professor of Geosciences and International Affairs, Princeton 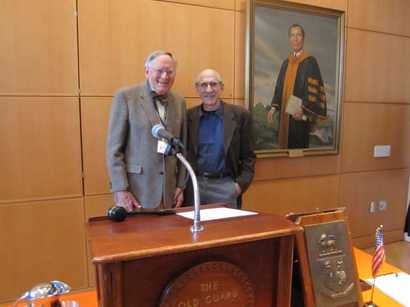 Scott McVay, Introducer, and Michael Oppenheimer, Speaker
Minutes of the 26th Meeting of the 73rd Year
The meeting was called to order at 10:15 with 104 attending. The invocations led by Joan Fleming and the minutes of the last meeting read by Ted Thomas.

An unusually large group of visitors (11) were introduced, necessitating skipping a number of announcements, and Scott McVey introduced the speaker, Dr. Michael Oppenheimer, the Albert G. Milbank Professor of Geosciences and International Affairs at Princeton. The official title of his speech was "Climate as we've known it, is a thing of the past: Navigating to avoid a dangerous Climate", shortened on his introductory slide to: "Climate Change: the basics."

The two topics proved complementary. 27 fact filled slides followed, many packed with multiple sets of data. Out of respect for my limited time, those not present last week must get the details from some other source.

The gist of his talk was an expression of real concern that if we did not change the way we have lived in the last 200 plus years, since the start of the industrial revolution about 1800, our planet may well become nearly uninhabitable by 2150. He made clear that he was an optimist, and believed that the world could avoid the worst consequences of global warming, the key measure that he used to make his case, but that positive steps could no longer be much delayed if we were to avoid an irreversible "tipping point" probably between 2050 and 2150.

​The data supporting his concern on global warming derives from the data collected from trapped air bubbles found in attic ice samples. 800,000 years of data is available and some 400,000 years analyzed so far. These air bubbles reliably indicate CO2 content and the ice, world temperatures measured against time. From this vast database, up until the beginning of the 1800's, world temperatures and CO2 content have behaved in a stable, repetitive pattern, CO2 increases led to increase temperature, then declined resulting lowered temperatures, a constant balanced pattern.

In the early 1800's this pattern was abruptly replaced by a massive increase in CO2, and a corresponding, related increase in temperatures. This has created steadily rising temperatures ever since, at a steadily increasing rate. At this rate of increase, already observed climate changes can be used to estimate with considerable uncertainty to times and impacts, the effects of these increasing temperatures with various unpleasant consequences for large numbers of people in the not too distant future.

The effects of greatest relevance were rising sea levels, perhaps as much as 20 or more meters, and areas of such intense air heat humans could not tolerate being out side. The links between temperature changes and these specific measures are well established and published.

He answered a specific question as to why no one is doing anything about this. The facts are well known to congress and government, but resistance of popular opinion and lack of consensus often defeats facts. In addition the world has many more immediate problems to solve.

On this cheerful note, the meeting was adjourned at 11:30.