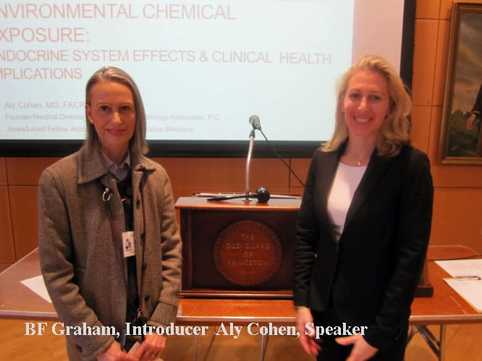 Minutes of the 25th Meeting of the 72nd Year
The meeting was called to order by President Ruth Miller at 10:18 a.m. 82 members were present.
The singing of the invocation was led by Don Edwards.

The minutes of the meeting of April 2, 2014, were read by Dick Bergman. The guest speaker at that meeting was Keith Richburg, whose subject was “A Reporter’s View of China and the World.”

Members were asked to introduce their guests, and Perry Morgan introduced his wife, Elizabeth, and B.F Graham introduced Laurel Quinn and Dr. Stephen Lewis. The guests were greeted with applause.
B.F. Graham then introduced our speaker for the day, Dr. Aly Cohen, a rheumatologist, whose subject was “Environmental Chemical Exposure and Clinical Health Implications.” Dr. Cohen is a graduate of the University of Pennsylvania and earned her medical degree at Hahnemann University Hospital. She continued her studies at Beth Israel, the Einstein Institute, Montefiore Hospital, the Helms Institute and the Arizona Center for Integrative Medicine. She combines studies of traditional and western medicine with integrative activities for total wellness. Most recently, she designed a pilot program for students at Princeton High School on the medical effects of chemical exposures. She lives with her family in Cranbury.

She became interested in endocrine disruptive chemicals (EDCs) when her young dog became very ill for unknown causes. She had noted that the dog chewed constantly on a red rubber toy and had developed autoimmune hepatitis. She found in the medical literature that this could be traceable to PVC contamination, which she characterized as a global threat. EDCs have been linked to slower neurological development, reproductive disorders, increases in testicular cancer, increases in the incidence of autism, increased obesity, accelerated breast development, increases in type 2 diabetes, increases in the incidence of autism and cognitive and physical deficits. Furthermore, it was discovered that the placenta was not a barrier to the transmission of accumulated EDCs, which could be passed on to subsequent generations.

By way of background, she stated that 84,000 chemical compounds have been approved for commercial use in the United States, and 1,000 new ones are introduced every year. Legislation in 1976 regulated new introductions, but 62,000 compounds were grandfathered at that time. Only a handful of compounds have been fully tested for neurodevelopmental and reproductive toxicity, and only five have been banned.

In particular, she cited phthalates and BPA (Bisphenol A), which are manmade chemicals that are used in many different products. The chemicals can leach from the products and be absorbed by our systems.

Phthalates, which include PVC (poly vinyl chloride), are used in tubing products, such as water pipes, toys and bottles to make plastics flexible, and in personal care products and cosmetics. BPA is used to make a strong plastic called polycarbonate, which in turn is used in drink bottles, to line metal cans of food and infant formula, and in sippy cups.

Dr. Cohen described the apparent health effects of these chemicals on human development. From animal studies, it appears that phthalates and BPA act in ways similar to the natural hormones in our bodies, and particularly on the development of fetuses, infants and children. Furthermore, one might assume that the greater the dosage, the greater the effect, but studies have shown that there is not a direct correlation between the two and that very small dosages may have a greater effect than larger dosages.

Studies have shown that in children phthalates have caused problems with male reproductive organs and increased allergies, runny nose and eczema. In adults, the chemical is associated with changes in sperm quality. BPA has been associated with increases in developmental disorders of the brain and nervous system. These developmental disorders in animals are similar to problems like ADHD in humans. One study has found an association between BPA and increased aggressive activity in two year old children. In adults, associations have been found between higher BPA exposure and increased risk of heart disease, abnormal liver tests and diabetes diagnoses. In animals, BPA may cause changes in cells in breasts, the uterus and the prostate that can increase risks of cancer, but BPA has not been classified with respect to causing cancer in humans.
How can we protect ourselves from the potential effects of phthalates and BPA? Dr. Cohen provided the following list:
Dr. Cohen continued with a discussion of a third endocrine disruptive class of chemicals; namely, fire retardants, which she characterized as PBDs. Again, many studies showed correlations between the degree of exposure of the chemicals and a wide variety of developmental disorders. Furthermore, there is controversy over whether they are effective; that is, to provide the 12 second delay in the spread of flames that would permit exit from a house.

Questions were asked about the potential effects of the chemicals on early breast development and on connective tissues. Dr. Cohen responded that the chemicals appeared to accelerate early breast development and greater breast cell density, which has correlated with greater susceptibility to breast cancer. Asked about the effect of wax linings for boxed drinks, and she said that it had not been studied, but that metal or glass receptacles were safest.

I congratulated myself for being born before the invention of most of these plastics. In my early youth, food was delivered in woven baskets, and liquids were in clay amphorae. My sippy cup was a battered Christening cup. However, gasoline was loaded with lead; at the doctor’s office, radium tipped probes cleared my sinuses, and, at the shoe store, X-Rays measured my shoe size.
When I left the meeting, a clear sunny spring day greeted me, and I felt completely detoxified.