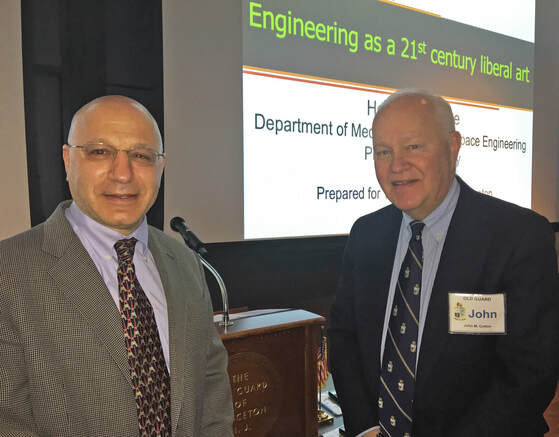 Minutes of the 29th Meeting of the 77th Year

Julie Coale, president, opened the meeting. Julie Denny lead the invocation, Patrick Bermuth read the minutes of the previous meeting, proposed officers for the next year were read, and names of members who made significant contributions were read. John Cotton introduced the speaker.

Howard Stone, Professor of Mechanical and Aerospace Engineering at Princeton, spoke on the subject Engineering as a 21stCentury Liberal Art.

Topics covered in Professor Stone’s talk included what is a liberal arts education, what is engineering, and the importance of integrating these disciplines.

A liberal arts education as we know it was derived from the British model where the student body consisted of privileged white males and where applied learning was not highly valued. The focus was on critical thinking, examination of life, and development of responsible citizens who were capable of principled judgement. As the professor noted, a liberal arts education might have been different if the original 13 colonies were French, since the French model focused on math and engineering.

At Princeton, liberal arts is summarized with the following: “A liberal arts education challenges you to consider not only how to solve problems, but also trains you to ask which problems to solve and why, preparing you for positions of leadership and a life of service to the nation and all humanity. We provide a liberal arts education to all our undergraduates, including those who major in engineering.”

Professor Stone gave several amusing personal experiences that demonstrated that some professors from at least one U.S. university do not consider the study of engineering worthy for their university. The university mentioned was Harvard.

What is engineering? The word is derived from “ingenuity” which is defined as “the quality of being clever, original, and inventive.”  A scientist discovers that which exists. An engineer creates that which never was. Successful engineering often requires the integration of science, beauty, creativity, and human nature.  Successful solutions include intuition, judgement, and teamwork.

The impact of engineering on the 20thcentury has been significant, to say the very least. These engineering achievements include automobiles, airplanes, radio, television, agricultural mechanization, telephone, air conditioning, internet, social media, health technologies, nuclear technologies, and many more. Integration of technology with broader considerations is becoming more important when new capabilities like CRISPR permit DNA modification and social media like Facebook are demonstrating they have the potential to fundamentally change our world, our relationships, and even who we are.

In short, Professor Stone is suggesting that many more U.S. colleges and universities offer a Bachelor of Arts in Engineering that would include engineering courses and liberal arts courses, and he is recommending that students wanting to earn a 21stcentury liberal arts degree consider majoring in one of these programs.