The State of the Humanities

Eric Gregory
Professor of Religion and Chair of the Council of the Humanities,
Princeton University 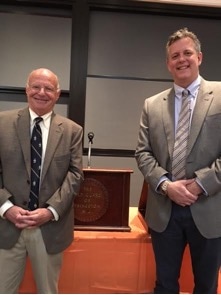 Minutes of the 32nd Meeting of the 75th Year

President McFarlane called to order the 32nd meeting of the 75th year of the Old Guard of Princeton at 10:15 in Maeder Auditorium at the Andlinger Center. Attending were 127 members. Charles Clark led the invocation. Lawrence Parsons read the minutes of our May 3 meeting.

President McFarlane reminded us that the meeting on May 17 will be a celebration the Old Guard’s 75th year, including a reception with prosecco and light fare, a summary of the Old Guard’s history by Diana Crane and an address by Dr. Harold Shapiro, former president of Princeton University. The meeting and celebration will take place at 10:15 a.m. in Maeder Auditorium.

Following the announcements, Henry Von Kohorn introduced the speaker, Eric Gregory, professor of religion and chairman of the Humanities Council at Princeton University. The subject of his talk was “The State of the Humanities.”

Professor Gregory’s message was loud and clear: the terrain of the humanities is both smooth and rocky in the light of intellectual and public appraisals. Although people are studying the humanities more than ever, our increasingly utilitarian culture is fast obscuring a humanitarian approach to life in general and the needs of others in particular. Renewed support and funding of the humanities in both private and public spheres will spawn new insights, tools and skills so necessary to the creation of honorable citizenship in a democratic society.

The humanities inform our lives in ways that are adequate to the complexity of the human experience. Through the humanities, we realize how the long traditions of art, religion, philosophy and literature can help us to make sense of today’s world and to commit ourselves accordingly. The humanities explore the meaning of freedom, beauty and truth – essential to a life worth living.

Princeton University’s reputation as a leader in the field of the humanities remains firm. Here, the Humanities Council is in dialogue with the creative arts, social sciences, natural sciences and technology. It offers scholarships, innovative teaching and intellectual collaboration at all levels.  Its website describes courses at undergraduate, graduate and postgraduate levels that attract scholars from all corners of the world. The council is the intersection for 16 departments, 30 programs and countless other opportunities for exploration.

In the realm of higher education, however, lie challenges that threaten the future of the humanities. Cultural and political divisions create impasses vis-à-vis identity, elitism, inequality and limits of cosmopolitanism. Large state universities are increasingly devoting themselves to research and training in science, technology and electronics, which they perceive to have a higher rate of return. They focus on political correctness and economic growth, thus relegating the humanities to smaller, privately funded intellectual enclaves where human memory and imagination are celebrated. Their graduates are becoming useful machines rather than thoughtful adults who understand one another’s culture and traditions and empathize with one another’s suffering.

The resulting high anxiety among the proponents of the humanities has fueled solidarity nationwide. They have collaborated to recruit a diversity of teachers and students, to lobby for federal funding and to convince elites that the humanities are a good investment. Columnists like Nicholas Kristof and David Brooks have warned that democracy, even civilization, is at risk if institutions of higher learning are not humanitarian agents during this period of historical transformation. The 50th anniversary of the National Endowment of the Humanities last year called for a renaissance of the humanities, growth of our cultural vitality and an outreach to cultural life beyond our shores. Despite widespread apprehension, there is now cautious optimism being expressed by such people as Representatives Leonard Lance and Rodney Frelinghuysen.

Professor Gregory leapt over the aforesaid obstacles with a clarion call to safeguard our democracy by giving liberal education full rein: encourage critical thinking within a diverse citizenship, enrich public discourse and address issues of the common good. He said we should now the world and cited a case in point: How shall universities respond to the current quandary of immigration?

The ultimate purpose of life should be the central concern of every undergraduate, Harold Dodds, then president of Princeton, said in 1953. Professor Gregory asserted that such a concern is best honed by a faith-driven commitment to the humanities. The humanities transform lives by offering benefits that wealth and prestige cannot provide. He concluded by challenging Old Guard members to become emissaries for the humanities and to enhance their hunger for knowledge by sharing their discoveries with one another and with the young.

Questions that followed had to do with a)the perception of elitism in universities that pursue the humanities, b)Princeton’s humanities curriculum, c)the study of the humanities abroad, d)support by public figures, e)foreign languages, f)peacemaking and g)specialization.