Our Democracy in Black:
​How Race Still Governs the Soul of America 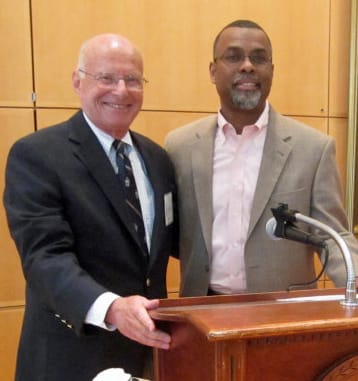 Henry Van Kohorn, Introducer, and Eddie Glaude Jr., Speaker
Minutes of the 31st Meeting of the 73rd Year
The 31st meeting in the 73rd year of the Old Guard took place on Wednesday, May 6, in the Friend Center.  After the Invocation, led by Arthur Eschenlauer, Doctor David Atkin read the minutes of the previous meeting.

Professor Glaude gave us a foretaste of his forthcoming book on race in America. Saying that his book was intended to be provocative, he acknowledged his own anger, the frustration and rage, the despair and newly kindled hopes of African-Americans, and the possibility of a wide range of responses to his talk among those members of the Old Guard attending his lecture.

American society, he argued, is a limited democracy with a progressive ideology that conceals, perpetuates, and legitimates various forms of traditional white supremacy. Racism in America, the speaker argued, is systemic: embedded in our practices, in the rules that govern them, in the greater value placed on non-African-American than on African-American lives. Even the American dream of freedom and equality, because it is couched in the future tense, only justifies the facts of very widespread inequality, oppression and brutality. The fact is that African-Americans must prepare their children to live a society that despises them.
There must be a change in our currently very limited political imagination. It is not enough for us to dream of a country encouraging good, creative energetic and responsible individuals to contribute to change in the nation’s schools, work, and politics.

It is not enough to mix African-Americans throughout all levels of the social system. African-Americans still live within limited social networks that suppress their opportunities and aspirations. The fabric of everyday life consists of poor housing, dirty streets, dilapidated and inadequate schools, indifference, avoidance, insults, hopelessness, and all too often, violence. Because racism is systemic, it permeates every  facet of the nation’s life, from the streets and the parks, from the schools and neighborhoods, to the courts, the politics, and the economy.

Racism exists at every level of American social structure. It is therefore not enough to put African-Americans in influential political positions. Only a very limited political imagination assumes that if there were more good people the system would be that much better.

It is not enough for government to foster better practices. So long as “center of moral gravity” is that whites are more valuable than blacks, African-Americans will still have to raise their children prepared to live in a world that despises them. Like the mother of Michael Brown, left to die in the street by a police officer in Ferguson, Mo., blacks will have to be the first on the scene to cover their dead children with a blanket.
It is not enough for government to preserve the openness of the market or to help citizens to become entrepreneurs, who have only themselves to blame if they fail.  In a society where racism is endemic and systemic, free choice and free enterprise, personal responsibility and accountability are not enough to enhance creative, virtuous citizenship, or hard work and productivity. For African-Americans, the relative value of whites over blacks pre-determines their residence, their occupational prospects, indeed all of their life-chances.

So long as there is “open season on young black men and women by the police,” no matter how powerful you are, your child may still call you up and say, “Dad, I’ve got to talk with you,” as did the speaker’s son, a student at Brown University when accosted by the police as he was sitting on a park bench in Providence.
Such long-standing, deep-rooted, and systemic racism will change if, and only if, there is a change in our political and social imagination and in the ideological maneuvers  that allow us to speak of equality as a mere goal or objective.

Far from being ideals for the future, social, economic and political equality are prerequisites and essentials for democratic life in the present. It is time for this nation to outgrow its protracted national adolescence about how virtuous individuals will redeem our flawed system: time for the nation to abandon its false innocence about the white supremacy forcing African-Americans to raise their children in a world that despises them. The activists in Ferguson understand this; they call themselves Millennial Activists United Now. Like Martin Luther King, they do not intend to wait any longer for deep, enduring, system change.