The Rise of Fascism in Europe:
Implications for Contemporary Society in Europe and America 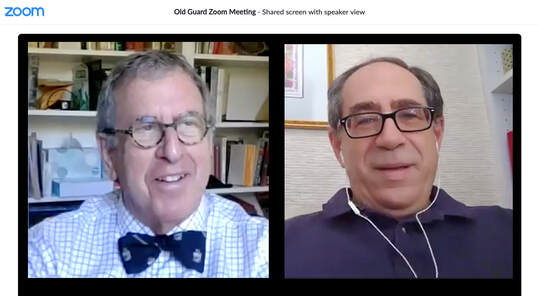 Minutes of the 25th Meeting of the 78th Year

The meeting was held on the Zoom platform and was called to order by President Julia Coale at 10:15 AM.

Robert Fraser read the minutes of the meeting of May 6, 2020, as prepared by James J. Ferry, featuring a talk by Professor Jennifer Rampling, Professor of History at Princeton University, “The Vision of Alchemy: Depicting Chemical Change in Medieval England.”

It was noted subsequently that 142 members of the Old Guard were in attendance on the Zoom platform at the meeting of May 13.

The President called for a moment of silence in memory of Old Guard member Betsy Smith, who died recently. The president also welcomed seven newly elected members to the Old Guard and reminded all members that the organization is still looking for candidates for membership, especially younger members, who can take the organization into the future. The President drew members’ attention to the Old Guard website which contains all information and forms relating to membership as well as searchable minutes for all past meetings. The president noted that the next meeting will be held on May 20, 2020; the speaker will be author and attorney Walter Frank whose talk is entitled “Trump 304, Clinton 227:  How it Happened and Implications for November.”

Stephen Schreiber introduced the speaker, David Bell, Sidney and Ruth Lapidus Professor of History at Princeton, where he received his Ph.D. in 1991. From 1990 to 1996 he taught at Yale, and then at Johns Hopkins, where he held the Andrew W. Mellon chair in the Humanities, and served as Dean of the Faculty of Arts and Sciences. He joined the Princeton faculty in 2010 and is the author of six books.

Professor Bell noted the careless use of the term “fascism” in current political discourse, both on the Left and the Right. Commentators have warned that following Covid-19 history may repeat itself with a resurgence of fascism. The speaker expressed skepticism about this proposition. A distinction must be drawn between authoritarian leaders and fascists. The term “fascist” should not be used as an epithet for every political ideology that one does not like.

Professor Bell then examined the origins of fascism with Mussolini, who invented the term, derived from the Latin “fasces,” a bound bundle of sticks. Mussolini made this a metaphor for strength and a symbol of his political party. Professor Bell argued that there are five central elements of true fascism:These elements were features of both Fascist Italy and Nazi Germany under Hitler. Bell noted that there are some parallels between fascism and Soviet communism, but there are distinctions too. The Soviet system was not overtly racist; it aimed at transforming society in a different way and did not elevate the cult of the leader to the same extent, except for a time under Stalin.

What was exceptional about both Italy and Germany that led to the rise of fascism, which did not take hold in other countries? Both were relatively recent polities, unified through violence, under a banner of extreme nationalism. Neither had any history of constitutional democracy. Militarism helped legitimize the paramilitary formations like the “squadristi” and the SA Storm Troopers on which the fascist parties relied.

Both states also suffered extreme economic collapse in the 1920s, which facilitated the use of broad “emergency powers” that led to fascist dictatorship. Professor Bell contrasted this situation with the rise of authoritarian, but not fascist, leaders like Franco in Spain and Pilsudski in Poland, both countries with ancient national identities and a less militarized culture. Fascist parties in countries like the U.K. and France remained marginal.

Looking at contemporary Europe, Professor Bell does not see any party that could correctly be termed “fascist.” The Front National in France and similar formations in Italy and Germany have some elements, like extreme nationalism, but not the cult of personality, or the paramilitary formations or the cult of violence, or pretensions to genuine revolution. The speaker considered Putin to be an authoritarian but not a revolutionary and there is no cult of personality at the level of Stalin or the true fascist leaders of the 20th century.

The speaker thought the possibility of fascism in the United States is even more remote.  None of the key elements exist. Real dangers for democracy are present in the current situation, including economic misery, climate change and mass migration,  but one should not look for false historical parallels.

In response to one question, Professor Bell said that he is most worried about the threat of voter suppression and electoral manipulation in how the election of 2020 will play out: Will there be widespread charges of voter fraud? Will we have a contested election and if so, will the Supreme Court decide it? The conduct of elections is the weakest link in our democracy.

The President thanked Professor Bell for a stimulating talk and adjourned the meeting at 11:15 AM.