Tricks of the Trade:
How Biographers Turn Lives Into Art 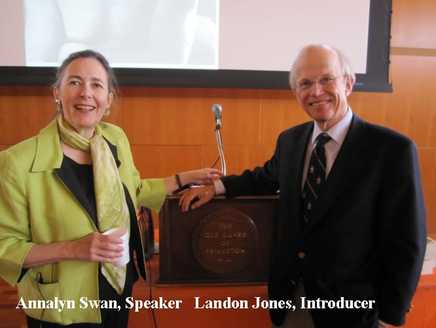 Minutes of the 30th Meeting of the 71st Year
The meeting was called to order by President Ruth Miller at 10:15 AM after a 45 minute hospitality gathering. The attendance was 114.

Julia Coale led the singing of the invocation.

The minutes of the previous meeting were read by Owen Leach, for their author Arthur Eschenlauer.

President Miller presented Princeton Old Guard blazer patches to members of the Executive Committee who had served for 3 or more years: Bud Lyle, as Assistant
Secretary, and Owen Leach as Vice President.

President Miller expressed the thanks of the membership for exemplary service to committee chairmen who are stepping down: Jack Reilly, Membership, and Bill Walker, Hospitality.

President Miller announced that members will not be obliged to observe the coat-and-tie dress code between Memorial day and Labor Day.

She also announced that our first meeting of the 2013-2014 year will be on September 11, 2013 at the Friend Center Convocation Room at 9:30 AM. The speaker will be Emily Carter, Director of the under-construction Adlinger Center for Energy and the Environment on the topic "Science for a Sustainable Future".

Landon Jones introduced our speaker. Annalyn Swan is currently a Visiting Lecturer in the English Department of Princeton University and is teaching "The Art of Biography". With her co-author and husband Mark Stevens she published the magisterial book "de Kooning: An American Master" in 2004. In 2005 it won a Pulitzer Prize for literature and was named one often best books of the year by the New York Times.

As an undergraduate Annalyn majored in English, graduated in 1973, and took her Masters at Kings College, Cambridge on a Marshall Fellowship. She held positions at the magazines Time and Newsweek and was editor in chief of Savvy, a business magazine.

She has been a Trustee of Princeton University an editor of the Daily Princetonian and the Princeton Alumni Weekly.

It took her and husband Mark more than 10 years to research and write this book about one of the "key figures in the Modernist Movement". According to Annalyn, de Kooning was one of the last artists to "live and die by the bravura brush stroke." Her talk today is entitled "Tricks of the Trade - How Biographers Turn Life into Art."

Beneath a projected image of a shirtless, strongly handsome young de Kooning, Annalyn Swan began. In describing the literary genre of biography, she said that it has been called "A voluminous, indiscriminate compendium of facts in which the biographer buries alive both himself and the reader." She teaches that in writing a good biography there are four absolutely critical points to keep in mind:

2) Find the inner truth of your subject. That is, "get a bead on your subject and stick with it the whole way through the book. Find the myth that animates the life".

3) Channel your inner novelist. "Shape the work with flare and care. Open with a bang, end with a bit of poetry, and always be aware of the "arc" of the life."

4) Context is critical. "Situate your subject within time and place.

To illustrate the application of these precepts, she gave a synopsis of her book, reading excerpts from the text and presenting images of the artist's works along with tales of his concurrent life and career.

Willem De Kooning was born in 1904 in The Netherlands to an urbanized peasant family where discord was the norm. At the age of 22, with little money and no English, he escaped to the US as a stowaway on a steamer out of Rotterdam. His new life in fast-paced America was one of culture shock. He made his way to New York City and found work as a commercial artist, learning drafting and artistic composition. Under the wings of avant guard artists Stuart Davis and Marshal Gorky in Greenwich Village, he strived to become a modernist painter. His early paintings were tentative and pale. In 1938 his life was turned around by Elaine Fried who later became his wife. She was a free spirit who "delighted in gestures without regret" Emboldened and inspired by her, de Kooning's art took on new freedom, color and motion. When his marriage dissolved 4 years later he spiraled downward, only to bounce up anew in the early 1940s with a "dam the consequences" attitude in his art. The resulting paintings, dubbed the "Black and White Series", has been called his greatest series and put him on the road to success. An example of this is his "Black Friday" that hangs in the Princeton University Art Museum. These are abstract compositions of white on black with “activated fields” of pulsing agitated rhythms, always incorporating recognizable shapes of human body parts. A slightly later work titled “Excavation” has been called one of the best works of the 20th century.

In the 1950s the center of the world art scene moved from Paris to New York City and De Kooning became a prominent exponent of the movement. In these years he was admired by other painters for the speed with which he could paint. One such remarked that de Koonings' whip-lash strokes had "a velocity of 150 mph." In 1953 he painted "Woman One", an abstract rendition of a female with penetrating eyes and exaggerated breasts. It became infamous and caused a sensation among the art critics, one of whom said that it is "Personally, socially, culturally and artistically fraught with uncertainty". Undaunted, de Kooning painted five more in the same vein that became a series known as The Five Ferocious Sisters. These were his halcyon days.

Eventually he was, in his words "devoured by his own success". He lived on the edge. After 1964 his binge drinking led to physical decline though his work continued to evolve into lush, huge abstractions laid on in thick gritty swatches. Still later his paintings became narrow ribbons of luminous color swooping across nearly empty white fields of canvass. In 1992 he drifted into dementia and died in March 1997.

The arc of his life was from loner to maverick with constant reinvention of his art and life, to stardom followed by long decline, dissolution and dementia.

Ending with a bit of poetry, Annalyn Swan writes about de Kooning's funeral at which was played, at his request, Frank Sinatra singing "Saturday Night is the Lonliest Night of the Week".

Annalyn finished with a description and slide illustration of her current work, a biography of the artist Francis Bacon.

The question period elicited the following information:
We should read Angela's Ashes, one of her favorite books, a memoir but in the same field of literature.