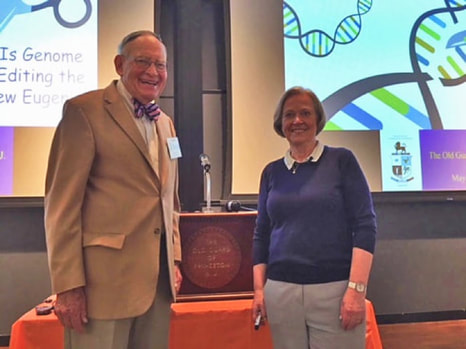 Minutes of the 31st Meeting of the 76th Year

President Jock McFarlane gaveled the final meeting of the spring program, and of his term in office, to order at 10:16, in the Maeder Auditorium at Andlinger Center. There were 147 members, new members and guests in attendance. Following the invocation, led by Roland Miller, the minutes of the previous meeting were presented by James Ferry.

Scott McVay introduced the speaker, Shirley M. Tilghman, president emerita of Princeton University and currently a professor of molecular biology at the Lewis-Sigler Center for Integrative Genomics. Numerous accomplishments of our speaker at Princeton during her 12-year term as president were outlined and noted, including the fact that  Andlinger Center, where our meeting was taking place, had been planned, funded and constructed during her tenure.

​Professor Tilghman quickly began the substance of her remarks by noting that genome editing is in fact the “second major scientific revolution” already experienced in her lifetime. She noted with admiration that those who came before her encouraged and funded fundamental research during the World War II era and explored science without knowing of, or giving thought to, any future monetary reward. She commended Prof. Vannevar Bush, of M.I.T, who served as science adviser to Presidents Franklin D. Roosevelt and Harry Truman. He authored the well-known book of the time, “Science, the Endless Frontier,” which strengthened the push for fundamental scientific research. She noted, in passing, that the current administration in Washington has failed even to appoint a science adviser.

As an example of the tremendous success of pure scientific inquiry, Professor Tilghman said the first revolution in her lifetime was in molecular biology, in the 1960s and 1970s, with the observation that bacteria could mount a defense against invading viruses and thus develop immunity. The breakthrough came with the recognition that this mechanism might be harnessed as a tool to fight human disease, giving rise to the industry surrounding what is known today as recombinant DNA. The mapping of the human genome quickly yielded private corporate initiatives such as Genentech in 1976, which led to drug therapies as early as 1982.

Professor Tilghman said the second revolution in in her lifetime stemmed from research on bacteria and building on the knowledge gleaned in work being done with the human genome. In 2012, Emmanuelle Charpentier, a little-known French microbiologist, in collaboration with Jennifer Doudna of the University of California, Berkeley, were able to use an enzyme to target a specific piece of DNA known to have a mutation, to cut out that defective strand and splice in a repair section. They theorized that the technique might be used as a repair tool and applied for patent protection in May 2012.  Almost at the same time, Feng Zhang of China and George Church of the United States were able to make the technique work on mammalian cells and they, too, applied for a patent covering their technique. They applied for accelerated treatment and were rewarded with a patent in December 2012. Professor Tilghman described an unholy scramble among lawyers and venture investors to capitalize on the new technologies, resulting in a tangled web of fortune seekers.

The new technology known as Crispr-Cas9 may be thought of in layman’s terms as “scissors.” It involves sending a targeted enzyme traced to a specific and defective segment of RNA, snipping out the defective segment and replacing it with an immune strand.

Professor Tilghman presented a graphic of the number of scientific papers written each year since 2012 on the subject of Crispr technology, which showed exponential growth of interest. She described experiments with the technique being used in animals to make cows have shorter (and therefore less dangerous) horns, in cows to be able to produce a greater quantity of milk, in pigs to be leaner, in chickens to be larger, and now in mosquitoes to be resistant to the malaria virus.

To date, Professor Tilghman explained, all experimentation is ex vivo (externally in a petri dish culture) with extreme caution being used to prevent altering any genetic component that might be passed unchecked into future generations. Such an alteration, she explained, might never be recovered and reversed from future populations. There is no F.D.A. approval for any experimentation inside the human species.

Professor Tilghman highlighted the distinction between “germline” gene therapy, which she defined as having “the capacity to pass change on to the next generation” versus somatic gene therapy defined as “care specific.” The latter she stated was obviously O.K. whereas germline therapy was emphatically not O.K. She underscored this dichotomy by stressing the many technical hurdles that still remain before Crispr technology can enter the mainstream. She explained that there is really no way of knowing whether a specific individual might have an immune reaction to the Cas9 protein or whether there might be resulting off-target changes yielding bad consequences.

While stressing the complexities and challenges of moving forward, Professor Tilghman acknowledged the tremendous hope that the new technology provides.  For example, she told of the current work in immunotherapy where supercharged T cells can be made to more effectively recognize and destroy invasive cancer cells. This actually works and is being used with increasing frequency.

She concluded her remarks by offering challenging questions about the direction the new field should take: Is there a compelling clinical need for germline gene editing? What is the mechanism for developing a broad consensus? Who are the stakeholders? How ought we respond to the slippery slope argument? How do we recognize the clear bright line between therapy and enhancement -- that is, a cure for asthma versus gene editing to create a taller basketball player? When does gene editing morph into eugenics, the 19th-century model of improving the human race?

During a Q&A period following her presentation, the former university president reacted to analogies made to earlier ethical dilemmas, including to the early days of the internet development (open source versus controlled) and to the containment of nuclear weapons. She distinguished gene editing from nuclear weapons by pointing out that biological markers can be traced to their source with tremendous accuracy. Not so, when it comes to the field of nuclear weaponry.
​
Respectfully submitted
Michael Mathews