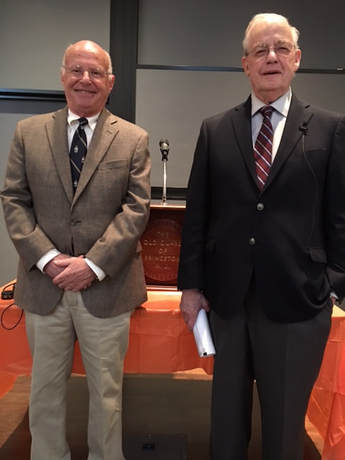 Minutes of the 33rd Meeting of the 75th Year
The President called the meeting to order at 10:15 a.m. in Maeder Hall at the Andlinger Center on the Princeton University campus.  The last meeting of the program year is by tradition “Guest Day” and 153 members and guests were present.  The guests were asked to stand to receive “a hearty Old Guard welcome.”

Juliana McIntyre read her minutes of Eric Gregory’s May 10 talk on “The State of the Humanities.”  The Old Guard Historian, Diana Crane, presented a concise, humorous and informative summary of the first 75 years of the organization.  The text of her talk is also available on the Old Guard website.  Unfortunately, the printed page cannot capture the charm and wit of her delivery.

Dr. Shapiro began his talk by noting the while he’s not a geneticist or even a scientist in the normal sense of the term, he does have a very long-time interest in how issues that are percolating on the scientific frontier impact our culture, impact public policy, impact the way we think about ourselves and impact the kind of future we’re trying to create in our society together.  The fact that he was appointed by President Bill Clinton to chair the Bioethics Advisory Commission from 1996 to 2001 certainly supports that statement.

He highlighted the current relevance of his topic of “Genetics – Then and Now” by noting that this morning’s front page of The New York Times referenced an article on creating embryos from skin cells.  This and other reproductive methods such as cloning may make male-female cooperation in the process obsolete.

Today he planned to focus on eugenics: the control of human evolution.  It was only a decade after Charles Darwin presented his theory of human evolution that a cousin, Francis Galton, suggested that we could control human evolution.  Social problems could be solved if the “fit” reproduce and the “unfit” don’t.  Of course, Galton thought he knew who the fit were – obviously people like himself – the educated, elite upper class.

His idea wasn’t implemented at the time, but the important point is that Galton took an advance on the scientific frontier and immediately made public policy out of it: a very unusual thing to happen.  Dr. Shapiro commented that technology is seldom a solution to a social problem.  Galton had no idea what a gene was but did have an understanding of how it worked.

In the early 20th century, the progressive movement in the United States looked to the state to implement social policy.  Eugenics was practiced by de facto and de jure segregation.  Laws against interracial marriage and voluntary and forced sterilization became common in many areas.  Some of those laws were upheld by the Supreme Court.  It took a while in the United States to unwind the legality of those practices after World War II.

In the 1930s Germany sent lawyers to the United States to see how this implementation of restrictive laws had been accomplished.  In 1934 this led to the Nuremberg Laws, which codified the Nazis notorious approach to “purifying” the Aryan race.  The Nazis saw how the United States had treated Native Americans as the frontier continually moved west as a victory for the Aryan race.

In the postwar decades, eugenics came in form of in vitro fertilization and cloning.  Our speaker remembers the cloned sheep, Dolly, and the furor and excitement that caused.  He was chairman of the Bioethics Committee at the time and President Clinton asked for a report on the topic.  Dr. Shapiro couldn’t see cloning had anything to recommend it over the old-fashioned way.

Galton’s idea for eugenics and evolution was an arranged marriage sort of thing.  The fit wouldn’t marry the unfit. It was a social approach; any scientific advances were a century away from Galton’s time.  It was exemplified by a story, possibly true, that a beauty queen told George Bernard Shaw that she should have their child -- who would have her looks and his brains.  “Yes,” said Shaw, “but what if it turned out the other way?”  Dr. Shapiro required a graduate seminar to read and review a book titled “End of Sex.”  The students were attracted to the title but found it was about new modes of reproduction and not taking a chance in the genetic lottery as is done now.

In fact, Dr. Shapiro continued, the wonderful thing about being a parent was not only forming individuals but accepting them for who they are.  Not today.  Nothing stands in the way of “designing” what kind of children we want, and we don’t have to enter the lottery.  No one can argue that having children free of genetic diseases isn’t a good idea.  But, he cautioned, think about the complexity of a human being and imagine what you would have to decide to design your child.  It’s an enormous responsibility and your child might sue if you got it wrong.

Dr. Shapiro concluded with a look to the future.  The new eugenics has tools Galton could never have imagined.  But there are no laws to govern what’s going to happen.  Scientists and biotech companies are going forward without a public discussion of that it means.  The science of eugenics isn’t creeping forward – it’s galloping!

He said we need to think carefully about what the new eugenics means.  What parenting means.  We can’t stop this fantastic human accomplishment but we have to use it intelligently to have meaning.  Don’t let it just happen.

After a short question and answer period, the president recognized and thanked past presidents -- Jonas Bingeman, William Haynes, Joseph Giordmaine, George Hansen, Robert Varrin, Ruth Miller and Owen Leach for their contributions to the Old Guard.  He then continued to acknowledge current and past members of the Executive Committee and the other committees that make the Old Guard function.  Finally, he challenged all present to continue, as the bylaws suggest, to “maintain a lively interest in the arts and sciences and in community, national and world affairs.”

The meeting then adjourned to a hospitality reception on the patio adjacent to Maeder Hall.