​Is Donald Trump a Threat to the Republic? 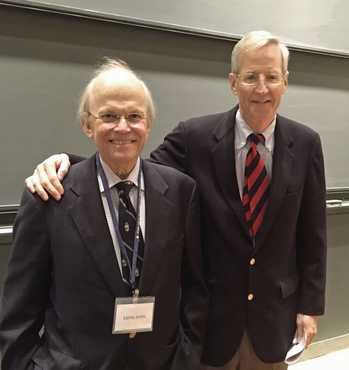 Landon Jones, Introducer, and Evan Thomas, Speaker
Minutes of the 33rd Meeting of the 74th Year
President Leach gaveled to order the 33rd meeting of the 74th year at 10:15 a.m. with 143 members in attendance in the Computer Science Building. Joan Fleming led us in singing the invocation and Pat Henry impressed us with remarkably inclusive minutes of Peter Field’s discussion of “Abe Lincoln’s Political Thought” last week.

Lanny Jones, in his enthusiastic introduction of his good friend and fellow journalist Evan Thomas, remarked that Thomas had not followed his grandfather to Princeton, but instead chose Harvard. Lanny touched upon only the high points of a brilliant career: writer and editor at Time magazine, Washington bureau chief and editor at large at Newsweek, weekly panelist on the syndicated public affairs talk show “Inside Washington” and Ferris Professor of Journalism at Princeton. Thomas has written nine books, most of them period- or issue-focused biographies, two of which have been best-sellers.

Addressing his topic “Is DonaldTrump a Threat to the Republic?” Thomas cited an earlier unstable time, a period of national uncertainty that he characterized by describing an elite and elitist gathering in 1896 of the Harvard graduates Theodore Roosevelt, Henry Cabot Lodge and Owen Wister. Porcellian Club members all, they asked themselves the existential question, “How long will the Republic survive?” Surprisingly, in retrospect, their common answer was just 50 years! That group should have been more confident. It was still the period of white Anglo-Saxon Protestant ascendancy. (In that year, 95 percent of a Princeton class was WASP, compared with less than 10 percent today.)

Nevertheless, the country was then beset by an undercurrent of fear, social Darwinism flourished, heavy immigration was decried, races were in conflict and WASPs feared racial “dilution.” Between 1870 and 1920 technological and industrial innovation was creating deep unrest, and the appearance of anarchists increased fear of even greater change. The traditional Anglo-Saxon ruling class suffered from neurasthenia; it felt impelled to honor Anglo-Saxon verities by constructing neo-Gothic university buildings and to demonstrate cohesion and strength by playing football and even fighting and winning the Spanish-American War.

Thomas cited Edmund Burke, who understood in the18th century that vast change was inevitable but could be managed humanistically with calm, measured leadership similar to the efforts of George H.W. Bush in the latter part of the last century. Unfortunately, he said, that Whig sensibility as well as contemporary moderate Republicanism are dead. Trump now reflects today’s fear of change — racial diversity, hollowing of family units, disruptive technology, loss of control in the global economy, and a feeling that the United States has lost its position of world leadership.

In reacting to those fears, like many bullies before him, Trump is so insecure himself that he is arrogant, unlike Eisenhower who was so self-confident that he seemed humble. Trump is the contemporary candidate of fear, as was the populist William Jennings Bryan at the beginning of the 20th century. Bryan never succeeded in gaining 51 percent of a presidential vote nor has any subsequent populist. But Trump might, having tapped successfully into the fear of change.

Thomas applauded the dynamism of this country when not in crisis and pointed out that we have endured and surmounted constant challenges. Early elections were terrible, basic internal societal and economic disputes led to civil war, race riots erupted frequently (they occurred in 68 cities as late as 1968), and we suffered economic crises and eventually a severe depression. Nevertheless, we are still the promised land and by every measure, the greatest. We have always renewed ourselves, attracting and absorbing the smartest immigrants. We are, Thomas contends, still the greatest country essentially because we respect the rule of law. It works. In conclusion he said, “We can stand damn near anything, even Donald Trump.”

​In answering questions, Thomas made several significant assertions: in gun violence, two-thirds of shots fired at human beings in the United States are suicides, and there is little hope of effective gun regulation; infant mortality might be reduced if America mimicked the European practice of concentrating on better early health care rather than extending life; we lag in academic achievement but our freedom promotes innovation.

Further, he noted, the decline in marriage weakens the social fabric because marriage maintains civility and children born in wedlock succeed better in life; the decline in religious observance is unfortunate because churches have been an effective social glue; Donald Trump is a pathological liar: imagine him speaking with foreign leaders (Nixon criticized the elite but he picked professors for his cabinet); Trump makes it up as he goes along; much public money has been spent uselessly on community improvement, it must come from within, it must be social change; school class size is important to academic improvement, but teacher quality is more important.