May 19, 2021
​
The WEIRDEST People in the World: How the West became psychologically peculiar and particularly prosperous
​
Joseph Henrich
Chair, Department of Human Evolutionary Biology,
Harvard University 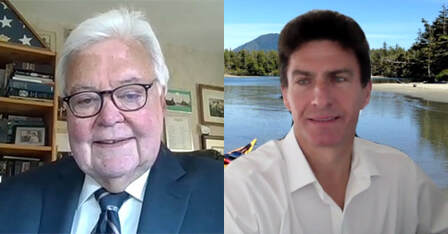 George Bustin, Introducer, and Joseph Henrich
Minutes of the 33rd Meeting of the 79th Year
The Zoom meeting was called to order by President Steven Schreiber at 10:15 AM on May 19, 2021. The minutes from the preceding week, prepared by George Bustan, were read by Henry Von Kohorn. There were 145 members in virtual attendance. George Bustan introduced the speaker, John Heinrich, chair of the Department of Human Evolutionary Biology, who presented a summary of his recent book The WEIRDEST People in the World: How the West became psychologically peculiar and particularly prosperous.

WEIRD is an acronym describing people in Western society – Western, Educated, Industrialized, Rich, Democratic. As his title states, Prof. Heinrich aims to explain how WEIRD people became so different from other societies in the world.
He first explained in what ways we WEIRD are different from the rest of the world, and then presented his theory of why we have become so different.

His basic hypothesis is that kinship intensity – importance of extended family – shapes our psychological behavior: Degrees of individualism, non-conformity, analytic thinking, interpersonal trust, fairness, and cooperation (which lead to democratic states) depend upon the degree of kinship intensity.

He first established how we are different: Using ethnographic data from hundreds of societies studied, he showed the rarity of WEIRD kinship relations (monogamy, descent connected to both father’s and mother’s families, few cousin marriages, not living in parents’ homes). Most societies do not have ANY of these characteristics, and less than 5% have all.

Kin-based organization (tribes and clans) were early forms of social order. Hierarchies by family became feudal societies. In these, your birth family established your privileges and obligations, whom to trust and have dealings with, and how other relationships, like marriage, would be allowed. Such kin-organized societies continue in many parts of the world.

Prof. Heinrich’s hypothesis is that the Catholic Church in late antiquity and medieval times changed this kin-based society. By outlawing cousin marriages – at one time out to the sixth cousin – suppressing multiple marriages, encouraging inheritances to the Church rather than to family, by modeling non-family-based relationships among its hierarchy, the Church changed Western society.

With kinship intensity weakened, individualism could be expressed; non-family relationships, encouraged; trust in other individuals, demanded; and pair-bonding based on choice rather than family became the norm.

To support this hypothesis, Prof. Heinrich presented much data: Using percentage of cousin-marriages as a measure of how kin-based a country’s society was – and in some countries that figure approaches 50% – he showed, in a series of charts, that higher cousin-marriage correlated with lower individualism, more conformity, less impersonal fairness, and less analytic thinking (versus holistic thinking). These correlations were “noisy” – in different countries the same cousin marriage rate could have widely different psychological measures – but given the wide range of historic, economic, and ethnic diversity among included countries, not unexpected. However, these charts made clear that WEIRD traits were associated with low kinship-intensity.

Prof. Heinrich bolstered his argument by showing how length of exposure to the Catholic Church correlated with weakening of kinship-intensity, a “dose-response” relationship. Other supporting evidence showed that the Eastern Orthodox Church, which allows more cousin marriages and married priests, was associated with societies of lower degrees of individualism, more conformity, etc. This is predicted from Heinrich’s theory that the Roman Catholic Church – and its offshoot, Protestantism – produced the lower kinship-intensity associated with higher WEIRD values.

After the speaker answered questions, President Schreiber announced the next meeting, September 8th, and especially thanked Old Guard members who had contributed so much to enable this year’s excellent meetings to happen.
​
Respectfully submitted,
David Vilkomerson