​The Success of India's Democracy 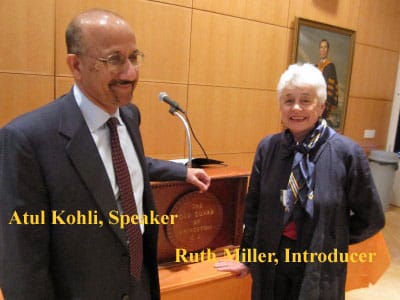 Minutes of the 31st Meeting of the 70th Year
The 31st meeting of the 71st year of The Old Guard of Princeton, held on May 2, 2012, was called to order by President Bob Varrin at 10:15 a.m. The invocation was led by Don Edwards.

Ben Colbert read the minutes of the April 25, 2012 meeting. Member guests were Mahem Das, introduced by Charlie Ascher, Ashok Kapon introduced by Brown Elms, and Joe Earle, introduced by Bill Walker.  87 people were in attendance at the meeting.

Membership Committee Chair Jack Riley announced that the candidates for membership as set out in the handouts for each member would be introduced and voted at the May 9, 2012 meeting.
President Varrin pointed out the group photograph, prints of which members can purchase.

Ruth Miller introduced the Atul Kohli, professor of international affairs at the Woodrow Wilson School and Princeton’s Department of Politics. Professor Kohli’s talk is entitled “The Success of India’s Democracy - a Puzzle?”

The roots of democracy in the British colonial period are based on there being a coherent, civil state, an army, law and order and some distribution of power and wealth, checks and balances with division of powers. Elections were already introduced in 1920 and 1935.

But what about Pakistan which also had the British colonial legacy? India’s leadership were city dwellers, middle class lawyers and professionals. Pakistan’s leaders were people with landed wealth and aristocracy, leading by prerogative of birth, without a motivation to share or transfer power to a larger group.

Nehru, who ruled with the Congress party from 1950 to 1964 was a committed democrat. During his leadership, the landed aristocracy was downsized and lost its political role. Elections were never interfered with, and the federal polity was organized around 25-28 different language groups leading to a multi ethnic polity in which many people could live together. Adult sufferage was adopted all at once, but the low levels of mobilization of the lower classes for the first 15 years left room for accommodation of their demands over time.

Indira Gandhi personalized power. She declared a two year period of national emergency when all safeguards on civil liberties were suspended, and then called for elections which she lost.  The imposition of national emergency powers strengthened democracy because people realized how much they would lose without it. This episode also caused the Communist party to give up on ideas of revolution and become social democrats.

In the 1980’s both Indira and her son Rajiv Gandhi were assassinated.  Now there are fairly firm roots of democracy and it is conceded that Indian leaders must win elections to hold power.  Currently 65% of voters are poor and they are anti-incumbent. Freedom of the press and openness make for an informed electorate.

The Indian military maintains a political respect for civilian leadership.

India has lots of problems, such as poverty, illiteracy and so on. There is a danger from religious communalism.  The Hindu national party is the 2d biggest party after the Congress Party, but it is very hard to create disciplined cohesive groups in India and the danger of the Hindu party taking over has past.

The success of India is based on its centralized government which accommodates the powerful which giving hope to the poor.

Question and answer period. Arms race with China has frightened Pakistan. Population growth is not as threatening as before; poverty is an enormous concern with 300-500 million poor; the economy is healthy with 6% growth, but the urban jobless are not absorbed and growth is in low paid engineers and trained people and the countryside is not growing.

The pre independence aristocracy were allies of the British and they knew their day was over, plus their power was so much less than the nationalists, that they fought for their pensions and landholdings.

The dominance of the Congress Party is based on the Nehru-Gandhi legacy vote, and is a government of last resort. With multiple parties whoever gets the most votes, not a majority vote, becomes an MP. Congress is 25% of the popular vote and the government is a coalition.
Prof. Kohli recommends a DVD on “Mountbatten” for those interested in the process by which Pakistan was created.

On the subject of widespread corruption, Pros. Kohli says it is hard to determine how harmful it is given the economic growth. Corruption is not based on government regulations, and is petty corruption with the apex of political and administrative personnel being relatively clean.
The British mainly trained civil servants and not the populace at large. Most British trained men became nationalists.
​
Respectfully submitted,
Julia Bowers Coale