Co-Founder and Executive Director of the Petey Greene Program 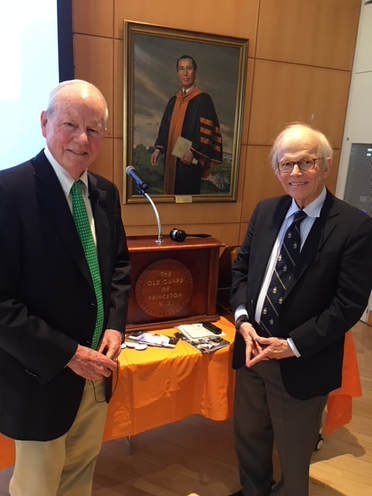 President Jock McFarlane called the meeting to order at 10:15 a.m. with 96 in attendance. Arthur Eschenlauer led the invocation and Richard Fenn read the minutes of the previous meeting. Guests were introduced: Robert Levine by Everett Kline; Sarah Jones Nelson by Landon Jones.

The president sadly reported that the Old Guard member Fraser Lewis had passed away last week and led a moment of silence in honor of Fraser.

Claire Jacobus, reporting for the nominating committee read the full slate of officers for the Old Guard for the year 2018-2019, which was then voted upon and approved. The list of names is attached below.

Robert Altman, reporting for the membership committee, reminded that election for new members would be held at next week’s meeting. There are 10 current openings with an additional 13 people requesting membership. The list of proposed new members is also attached below.

President McFarlane reported that an executive committee meeting will be held next Wednesday and that the next Old Guard meeting would be held on May 9 at the Community Room of the Princeton Public Library. The speaker will be James Hockenberry, author of a World War I Intrigue Trilogy. His topic will be “New Jersey’s Role in World War I: Sabotage Target and Key State in the War Effort.”

The program began with a handful of volunteers from Princeton University and has since expanded dramatically. Now in its 10th year, the program has sites in Massachusetts, Connecticut, Rhode Island, New York, Pennsylvania, New Jersey, Maryland and Washington, D.C., with over 892 volunteer tutors from 29 universities. In 2017 the volunteers visited 44 different correctional facilities.

Mr. Farrin was awarded the 2017 AARP Purpose Prize, given to role models who are makers and doers. The prize is all about a new story of aging — focusing on experience and innovation and the idea that our aging population is an untapped resource full of possibilities. Recipients are out there creating new solutions that make the world a better place for people of all ages. A brief video produced by AARP was shown, outlining Mr. Farrin’s accomplishments in leading the Petey Greene Program.

Landon Jones’s introduction concluded with reference to Mr. Farrin’s prowess as a successful worldwide tennis pro who once beat an American tennis legend, Arthur Ashe.  Mr. Farrin proceeded to pick up from there using his tennis experience as a backdrop for how his career progressed to his ultimate role in the Petey Greene Program.

He detailed with respect the key role his own father had played in his development.  His father, an All-American athlete and No. 1 in his class at the Naval Academy, was also an accomplished tennis pro. Describing a number of the tennis experiences he shared with his father, he concluded with the guiding principle he learned from him – “Never give up. You never know when you can turn a situation around.”

Tennis gave him an opportunity to travel the world visiting nine countries over a 17-year period. Following his graduation from Princeton, he went to Stanford Business School, where he also worked on the school tennis program. It was at Stanford that he met and courted his wife, Marianne, to whom he has been married for 58 years. Upon graduation from Stanford he acknowledged that his future was best served in business rather than tennis.  Having developed a fondness for Princeton, which he referred to as “Princetonitis,” he moved back to Princeton with Marianne, where she studied and earned a degree from the Princeton Theological Seminary.

He became an executive marketer in corporate America until he reached his 60’s, when he began a small consulting business in Princeton.  It was clear throughout his talk that the role model created by his father’s example in combination with the religious values that he shared with his wife, were driving forces in the spirit that led him to accept the Petey Greene role.

In 2008 there were numerous programs to help separating prisoners get a college degree, but Mr. Farrin discovered there were no programs addressing what he called the front end, namely prisoners achieving GED levels.  It was this educational opportunity that he seized with Petey Greene.  Research concluded the rate of recidivism was reduced 40 percent for prisoners participating in a minimum of only two courses. In the early years of his leadership, he handled every aspect of the program. While there was modest growth and expansion it was not until three years into his tenure when he agreed to hire additional director resources that the Petey Greene Program began accelerating to its current impressive size.

He proudly explained that they have developed comprehensive five-hour training for prospective volunteers that has proven to prepare them well for entering the prison environment.  He cited testimonials on program benefits from tutors that may best be summed up with the following tutor quote:

“I do not do it for them alone. I have become a better person myself. All my prejudices have been thrown away. And I discovered my own passion for teaching.”

And as to the benefits for prisoners he offered this compelling quote from a prisoner student:

“Your contribution matters to us, because in this dark place called prison, you all are a true beacon of light. Thank you.”

Mr. Farrin’s passion for the positive results of this program was obvious. Aside from the aforementioned teaching experience for tutors, it has served to educate them on the state of the American prison system as well. And for the prisoner students it has provided a reason to improve and focus on a crime-free life.

And the almost anticlimactic question at the end, “Who was Petey Greene?”  Once the laughter subsided, Mr. Farrin described that Ralph Waldo “Petey” Greene served prison time for armed robbery in Washington D.C. In prison he became a DJ and advocate for prisoners. Back in civilian life he was a well-known DJ in the Washington/Baltimore area. Mr. Puttkammer mentored him and dedicated his formal tutoring program to Petey Greene.