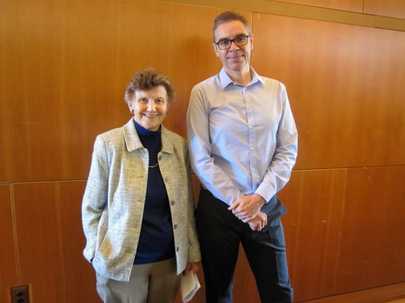 Julia Coale led us in the invocation. The minutes of the May 13 meeting were read by Richard Fenn. It was Guest Day and the guests were asked to stand. The following signed in: Nancy Kieling hosted by Jared Kieling, John Griffith hosted by Aiden Doyle, Sheila Berkelhammer hosted by Jerry Berkelhammer, Rogie Rome hosted by Martin Rome, Hazel Stix hosted by Harold Burkan and Linda Prospero, Ron DiCico, Connie Hassett, Gilda McCauley hosted by Nancy Beck.

There were 127 people in attendance. President Leach thanked member Brown Elmes for providing the beautiful home-grown peonies that graced the head table.

There was a moment of silence for recently deceased members James Livingston and V. Gerald Wright.
The bylaw revisions which were emailed May 12th and offered in hard copy at last week’s meeting were approved. There was a quorum of 98 Old Guard members present; the vote was 96 to 2 in favor of the measure (adoption of all suggested bylaw changes.)

Since May 20th’s meeting was the final meeting of the 73rd year, President Leach requested that we honor four “retiring” members of the Old Guard Executive Committee. Jock McFarlane has been program chair for five wonderful years. Roland Miller has served for three years as Recording Secretary. Bruno Walmsley was founder and has been Website Chair for 10 years. He is turning over the reins to his Assistant Roland Miller, and Bruno himself becomes the assistant. Finally, Anton Lahnston has served five years as Assistant Treasurer.

Nancy Beck introduced our speaker Simon Morrison who is Professor of Music at Princeton University. His topic was “Music and Politics in 1939.” He took us on a tour of music in 1939 and asked the audience to think in terms of what happened to composers leading up to World War II who did not find refuge in the United States. Professor Morrison that the great works composed or premiered in 1939 include the French composer Francis Poulenc’s Organ Concerto, the English composer Ralph Vaughan-William’s Five Variants of Dives and Lazarus, as well as major works by great musical exiles in America. These include Arnold Schoenberg, Igor Stravinsky and the Russian Vladimir Dukelsky who made it big on Broadway as Vernon Duke. He wrote April in Paris which was then played for us.

Professor Morrison discussed another exile in America, the Hungarian modernist composer Bela Bartok. He suffered from leukemia and was offered a commission to write a new orchestral piece Concerto for Orchestra. But Bartok is best known for his intense interest in folk music because he loved the non-alienated rural lifestyle. As a result, the finale of the concerto is a literal transcription of a Romanian folk song. He played the opening of the finale for the audience.

He compared that Hungarian/Rumanian music with American born composer Aaron Copeland’s Hoedown from Copeland’s contemporaneous ballet Rodeo which he played for us.

Returning to an earlier exile to the United States, Morrison discussed Arthur Schoenberg who came here in 1933 from Germany to escape persecution. Schoenberg felt a need to atone for the German nationalist statements of his youth as the unimaginable horrors of fascism began to reveal themselves. In fact, by 1945 the world Jewish population stood at about two-thirds of its prewar total. Schoenberg’s own struggle can be heard in the next piece played for us: the opening of A Survivor in Warsaw, a dramatic cantata describing the final battle of the ghetto.

Professor Morrison relates to Sergei Prokofiev who chose in 1939 to return to Stalin’s Soviet Union in 1939 after 18 years in America and Europe and found himself trapped there. Since artists were dependent on the goodwill of the ruling regime, Prokofiev like all Soviet composers was obliged to write propagandistic works in support of the odious Soviet political system. For Stalin’s 60th birthday, Prokofiev wrote Zdravitsa, a cantata whose opening was played for us.

Back in the States in 1939, American music defined popular music around the world with jazz, swing and the big band music of Count Basie, Duke Ellington and Glenn Miller who disbanded in 1942 to form and direct an armed forces band. In the Mood and the Andrew Sister’s Boogie Woogie Bugle Boy were played for the Old Guard.
​
Professor Morrison’s last message to us was about Judy Garland’s song Over the Rainbow from the movie The Wizard of Oz. Dorothy wishes to leave her black and white existence in Kansas for the color utopia of the Emerald City. It seems perfect but in fact is fake, overseen by a little man trying and failing to run a big machine. Soon Dorothy yearns for home. Who can blame her? It is frightening in Bartok’s, Schoenberg’s and Prokofiev’s worlds. In 1939 we wanted music of comforting American-ness, profound in its simplicity.