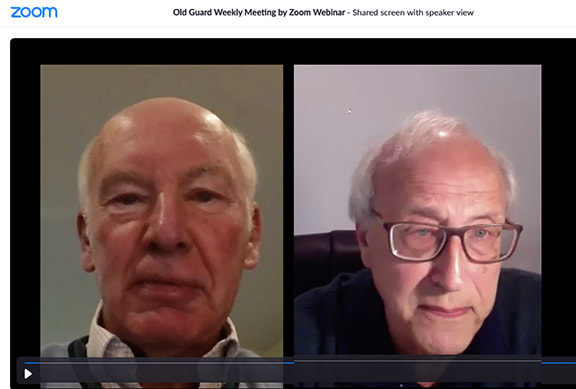 Minutes of the 26th Meeting of the 78th Year

The meeting of May 20, 2020, held via Zoom, was opened by President Julia Coale at 10:15 AM. George Bustin read the minutes for the preceding week. This Zoom meeting was virtually attended by 150 members.

David Vilkomerson introduced the speaker, Walter Frank, a teacher and author of several books on political history, including Understanding the Constitution, in 2012; Law and the Gay Rights Story, in 2014; and recently, at the end of 2019, Do We Have a Center, an analysis of the 2016 presidential election. His talk continued this analysis and was entitled “Trump 306, Clinton 232, and its Implications for 2020.”

Walter Frank began by reviewing why – by the measures of conventional wisdom – Donald Trump should have lost the election: He was outspent, 2:1; Hillary Clinton had a stronger “ground game”; newspapers widely endorsed Clinton; Clinton had “star supporters” including the sitting president and almost all of Hollywood; Clinton won the debates; and Trump had a scandal-full past and a scandalous tape recording that, most people thought, would hurt his election chances severely.

So how did he win?

In short, as usual with battles won by a weaker side, by superior strategy and tactics.
He cemented support of a significant ally, Evangelicals – naming an eminent Evangelical, Michael Pence, as his running mate, and ensuring Evangelical support by promising to name Supreme Court justices who might overturn Roe v. Wade and would oppose gun control. It worked – Evangelical support went to 85% from 75% for Romney in the 2012 election.

Trump retained traditional Republican support by promising to achieve their long-sought goals: massive tax cuts and deregulation of business practices. That too worked – almost all Republicans, even the “never-Trumpers,” voted for Trump.

Trump focused on the dissatisfaction many traditionally Democratic voters expressed with the direction of the country, in particular the stalling of the American dream of rising prosperity. For them, he was an agent for change: a “non-politician,” direct, blunt and politically incorrect. His rallies, like rock concerts, with ardent audience participation ("lock her up"), made these voters feel part of a larger community. And the rallies drew extensive – and free – media coverage.

His ads concentrated on the economy and working-class concerns: immigration that was taking jobs, crime, taxpayer money going to foreigners. Clinton’s ads, in contrast, minimally addressed economic issues – less than 10% of content – and maximally, 75%, character issues. Most of the Trump voters cared more about living better than about better character.

Superior campaign tactics included better use of social media (half of the Trump ad campaign) and a brilliant motto, Make America Great Again, fuzzy enough so to be read as a call to restoring white special privilege or as a call to greater prosperity.

And superior data: Partisan polarization has made many states either strongly Republican or Democratic. That allowed the Republican campaign to concentrate, with frequent polling and focus groups, on the few “swing” states that could go either way. The Democratic campaign relied on demographic analyses, trying to recreate the Obama electorate.

Resulting actions: Reading his polling data, Trump suspended campaigning in Virginia weeks before the election, while in contrast, Clinton failed to even campaign in Wisconsin, part of the traditionally Democratic “Blue Wall,” and lost it, by a very small margin. In Pennsylvania, another Blue Wall state, Clinton campaigned in cities and campuses, while Trump campaigned in rural areas and gained 350,000 more votes than had Romney With those votes, he won the state.

Clinton, apparently assured by her data, stopped all polling three weeks before the election.

In the Q&A, the speaker refuted a suggestion that Trump’s appeal to white racism was an important factor by pointing out that Trump’s percentage of white voters in 2016 was the same as Romney’s in 2012. Questioned about the effect of Russian interference and James Comey’s email announcement, the speaker agreed they could have had an effect in this very close election, but this was not why this election was so close.