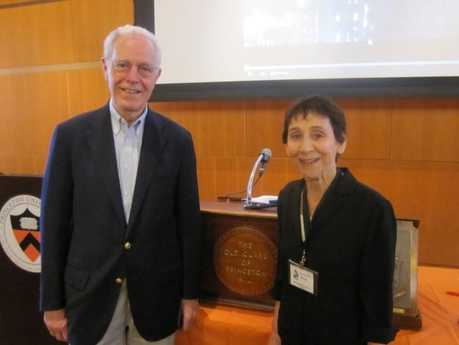 President Miller announced the passing of Member Dana Fearon and asked for a few moments of silence in his honor.

Marge D’Amico introduced the speaker, Professor Uwe Rheinhardt, the James Madison Professor of Political Economy and Professor of Economics and Public Affairs at Princeton University.  Professor of Rheinhardt received his Bachelor of Commerce from the University of Saskatchewan and a PhD in economics at Yale.  He is a member of the Institute of Medicine, and past president of the Association of Health Services Research and the International Health Economics Association.

He has served on  numerous governmental commissions including the Physician Payment Review Commission and the Medicare Payment Advisory Commission. The title of his talk was “The American Dilemma in Health Care.”

Professor Rheinhardt began with a film clip from the ABC TV Show hosted by Jimmy Kimmel.  The program was a series of on the street interviews asking which was better Obama Care or the Accountable Care Act.  All interviewees emphatically chose one or the other not realizing they were the same.  This illustrated wide spread confusion and the dilemma when communication fails.
His first slide outlined 6 dilemmas effecting American Health Care Policy:
Number One: The high cost of health care. From 1965 to 2012 the American gross domestic product grew 2.3 fold while health care spending grew more than 6.8 fold. The cost of health care for an average family is $23,500 while the medium household income is $56,000. This means the bottom half of American families cannot afford American style health care. The dilemma is to create a three tier system, one for the bottom half of the country, one for the upper half and a boutique system for the super rich ----OR----- raise taxes. The cost is displacing funds from other functions of government such as education, science and infra-structure. Yet the Institute of Medicine reported 31% of health care cost is wasted on inefficiently delivered services, administration, and high charges. This totaled 760 billion dollars. Surprisingly, it is not because of patient over use.  Americans have fewer office visits, take fewer pills, and have fewer hospital admissions than Europeans. But we pay a lot more.  As an example, the cost of an appendectomy in Switzerland is 4,00 dollars while we pay between 8,000 to 29,000 dollars.  We pay 2 to 3 times more for any procedure or pill.

Administrative costs are driven by a very complex system. A system based on pre-existing conditions, age, income, and lack of competition. It is confusing to the insurance companies as well as the purchasing individual, employer or governmental agency. For example there are five different insurance plans for the elderly who are poor. This over regulation is not found in the Canadian or German systems.

Number 2: Income inequality means more Americans are not able to afford health care. This creates an ethical dilemma for the upper income citizens whether to pay higher taxes for care of lower income citizens --- or not.

Number 3: Economic growth of 3 to 4% in the past could accommodate our health care system, but as it slows to 2% and lower it cannot. Especially when accompanied with rising health costs.

Number 4: Increasing ideological polarization inhibits our ability to develop a consensus on the ethical values on which to base our health policy. Many believe health care should be available to everyone on equal terms. Others believe it is an individual responsibility with a bare bones policy for the indigent. Europeans have a policy covering 90% of the population while the top 10% income bracket can buy out at their own expense. Professor Rhinehardt believes we can never get coherent health policy without first establishing an ethical values consensus.

Number 5: Non functioning government was illustrated with a slide showing the disappearance of bipartisanship. This Congressional stalemate forces the President to run the government by issuing executive orders.

Number6: Mismanagement of the Accountable Care Act roll out as well as other issues adds to the dilemma. The combined effect is causing many Americans to lose faith in their government.  People confuse the bad implementation of the policy with the policy itself.  Professor Rheinhardt feels the policy itself is a lot better than its implementation.

He concluded being greatly concerned for the republic if the governed feel their government can do nothing right.

Questions followed.
1:  Please comment on setting age as a limit for rationing health care.
Answer- In the past this was not an issue, but now we must ask ourselves are these procedures worth doing? Sometimes you have to say no.

2: Is the per capita cost been driven by the fact Medicare and Medicaid has no fiscal restraint?
Although initially there was an increase since 1970 Medicare per capita cost is from slightly to significantly lower than other programs. Government has controlled this cost better than the private sector. They do it with price controls. But by law they are not allowed to use “reference pricing” where they pay a price based on what one hospital charges. If another hospital charges more the patient pays the difference. Medicare is not the cost driver in our system.

He believes Medicaid far under pays providers. It is worse in NJ where primary care physicians are paid less than those in Louisiana and Kentucky.

3. What can the government or some other entity do to solve this problem?  How can we implement a single payer system?
We need a parliamentary system of government that makes lobbying of the legislature illegal.  He cited drug companies spent hundreds of millions of dollars successfully lobbying on a Medicaid bill.   He believes we cannot have a single payer system with our form of government.  But we can make incremental changes over time to improve it.
President Ruth Miller was given flowers as a gesture of thanks for her two years of service.  She then passed the William Howard Taft gavel to the incoming president, Owen Leach, who closed the meeting at 11:30 AM.