Sir George Martin and the Beatles 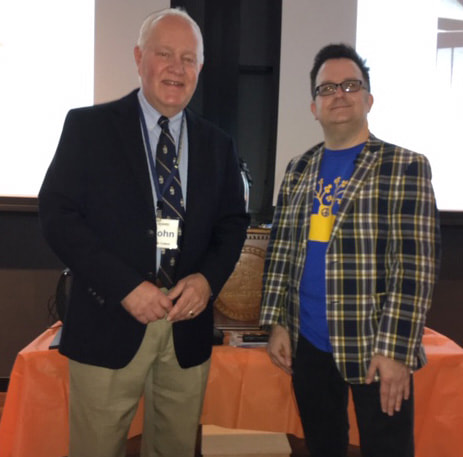 Minutes of the 32nd Meeting of the 77th Year

President Julia Coale called the 32nd meeting of the 77th year to order on May 22, 2019. There were 124 Old Guarders attending and numerous guests for this last meeting of the year. Roland Miller led the invocation. Constance Hassett read the minutes of the previous week, The Worlds of Frankenstein and Dr. Jekyll and Mr. Hyde, presented by Susan Wolfson, Professor of English at Princeton University.

ANNOUNCEMENTS
Because of the large number of guests at this meeting, Julia Coale asked them to stand as a group rather than being introduced individually. She also recognized the new Old Guard members who were attending their first meeting.

President Coale thanked Julia Denny for recruiting and scheduling the invocators and thanked the officers, committee chairs, and members for making this year such a memorable one. She also thanked all the Old Guard members for their faithful attendance and support.

PROGRAM
John Cotton introduced speaker, Ken Womack, a professor at Monmouth University and Beatles scholar. His Cambridge Companion to the Beatles was voted by the Independent, as the best music book of 2009.

Womack wore a Yellow Submarine shirt in homage to what he described as the Beatles “finest and most lucrative album.”  He showed a 1963 photograph of Martin, the Beatles long-time producer. Martin, normally quite reserved, was unusually giddy in this picture. It was the culmination of his dream to elevate the status of popular music.

George Martin was born in 1926 to a dirt-poor London family but they had one luxury item -- a piano. After his World War II stint at a desk job in the Navy, Martin attended London’s Guild Hall School of Music. While in the Navy, Martin carefully observed the leadership qualities and accents of the officers, down to which of several forks one should use at a formal dinner. His “Fairy Godfather,” Sidney Harrison, a professor at Guild Hall, introduced Martin to Oscar Preuss, the head of Parlophone Records, a third-tier label for EMI’s less popular offerings. Martin charmed Preuss’s secretary, Judy Lockhart-Smith, a “high class lady with a double-barreled last name.” with his posh accent and got a job at Parlophone. His first assignment was riding around Scotland, auditioning traditional bands in schools, church halls and pubs. “He didn’t have a clue what he was doing,” Womack observed and was almost fired several times.

But he survived and produced “Mock Mozart,” a hilarious sendup of Mozart operas featuring a yodeling Peter Ustinov. It was a huge hit, followed by “Beyond the Fringe” and “That Was the Week That Was,” that saved Parlophone from extinction. These somewhat primitive recordings foreshadowed the quality Martin would bring to the Beatles recordings, especially in terms of clarity and orchestration.

Nothing like competition to move Martin to the next level. This came in the form of Norrie Paramor, the producer at another EMI label, Columbia records. Under Paramor, Columbia produced hit after hit. When Paramor rode up to the Abbey Road studios in his brand-new red Jaguar, Martin’s jealousy was at an absolute peak, Womack told us. Paramor was making pots of money on music that Martin referred to as “mess house posh.” Martin finally got his first #1 hit in 1961 with “You’re Driving Me Crazy,” performed by the Temperance 7, a band of eight drunks from Scotland. “I want a rock hit,” Martin said, “but I am forever tethered to these alcoholics. What is wrong with my life?”

That all changed when George Martin met Brian Epstein, who introduced him to the Beatles. Epstein told Martin, “I have a band from Liverpool, and they are going to be bigger than Elvis.” Even though the Beatles had been turned down by Decca records, Martin agreed to give them a try. The first recording session in June 1962 did not go well. Pete Best, the drummer, had a bad day. They recorded “Love, Love Me Do” with a ragged harmonica accompaniment, which George, who loved precision, hated. “At the end of the session, Martin asked the individual Beatles if there was anything they personally did not like, to which George Harrison replied, "Well, there's your tie, for a start." That broke the ice. And the Beatles got their contract. Ringo Starr joined the group shortly thereafter and over the next seven years, the Beatles produced their most famous works with George Martin as their producer and musical arranger.

In 1965, the Beatles recorded “Yesterday,” which Womack described as a turning point for them musically. By now, Martin was not just producing but also orchestrating their recordings. In “Yesterday,” he introduced a Hammond organ, played with different recording speeds and included a string quartet and Bach counterpoint. The Beatles referred to Martin as “big George” in the studio and as the “Duke of Edinburgh” behind his back but his most lasting sobriquet is as the “fifth Beatle.”