​Seeing Like a Rover: Images in Interaction on the Mars Exploration Rover Mission 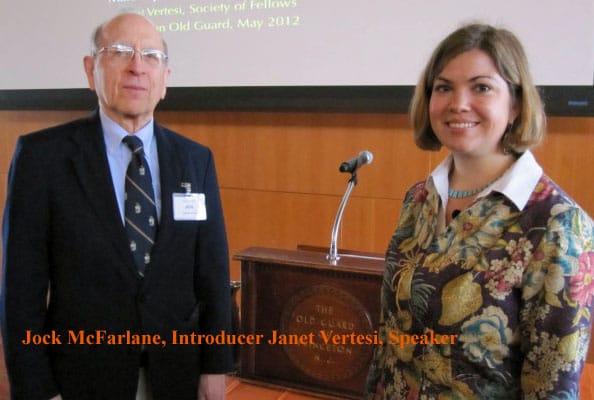 Nick Wilson then conducted the election of new officers of the Old Guard and introduced the new duly elected President, Ruth Miller, and the other elected officers.  All outgoing officers were thanked for their dedicated services.

Prior Minutes:  Charles Stenard presented his report of the remarks of the speaker at the May 16th meeting [“Gilbert & Sullivan: Gender, Genre, Parody” presented by Carolyn Williams, Chair, Dept. of English, Rutgers, Univ.].

Speaker Introduction:  Jock McFarlane introduced our speaker Prof. Janet Vertesi.  She has a BS and MS and received a PhD from Cornell in 2009.  She has done post-doctoral work at the Univ. of California’s Irvine Informatics Dept.  She is a Cotsen Fellow, Society of Fellows in the Liberal Arts and is a Lecturer in the Sociology Dept. at Princeton University where she teaches interdisciplinary approaches to problem solving and critical approaches to human/computer interactions. She has many publications and her current work [sponsored by NASA] entitled “Social Life of Spacecraft” deals with the Casini mission to Saturn.

Lecture: Professor Vertesi’s lecture was based upon her PhD thesis and her talk was entitled “Seeing Like a Rover: Images in Interaction on the Mars Exploration Rover Mission.”  Prof. Vertesi provided us with a behind the scenes look at the famous Mars exploration missions wherein two Rovers, Spirit and Opportunity, landed on Mars in 2004. They are considered as robotic geologists having nine [9] different cameras and a “hammer” [used for scratching the Mars surface].  These tools of geologists are used to understand the composition of Mars and the availability of water.  Opportunity discovered water on its 1st day of operation while Spirit had to work hard to make discoveries.

Two significant factors that impact the control of the robots are the large number of participants in the decision-making process and the relatively long [7 – 20 minutes] time for commands to reach Mars when sent from Earth.  This latter fact implies that the robots cannot be controlled in real time with the result that the large team of scientists and engineers [that are frequently not co-located] must plan a sequence of operations for the next day without exact knowledge of what the actual result will be from the robots following previous commands.

To account for this a unique team structure was developed and employed for the command and control of both Rovers; Spirit, which lasted for 2500 days, and Opportunity, whose operations are ongoing after 3000 days. Both Rovers were designed very conservatively for a life of 90 days.  Rather than have a project leader for each instrument [as in previous missions], the Rover program’s management structure relies upon a single project leader with all [in excess of 100] engineers and scientists reporting to this leader. The planning for the next day’s command structure is accomplished as a total team effort wherein all participants meet daily and must negotiate a next day’s command structure that is acceptable to all parties – i.e., unanimous agreement for the details of the next days events.  All participants have a vested interest in achieving each day’s goals since an ill planned approach can have serious long-term consequences for all participants.  In the discussions leading up to an approved set of commands if was found that many of the participants started to think like, see like, and act like a Rover. This was a learned skill that usually took a number of months of practice and participation. They sometimes would contort their bodies to better visualize how the rovers would react to a set of commands or conversely, what commands should be sent to get the Rovers to perform desired operations.

Learning the way that the Rovers see Mars was particularly important when looking for low risk driving routes that required the Rovers to move up/down slopes and to avoid obstacles. The team used multiple images to learn how Rover sees Mars. They also used 3-D images to visualize the topology of the terrain.  Different types of images were combined and used to create stories and narratives to anticipate how Rover would operate/proceed with a given set of commands.

It was found that the scientists and engineers working with Rover quickly developed an attitude that “I am Rover.”  The team uses “we” to refer to Rover; for example “we” want to travel to a particular place – Rover and the team is “we.” Rover becomes a totem that brings the team together. The members of the team share a common future that is intimately tied to the Rover and its continuing yet unpredictable life.

Professor Vertesi concluded by emphasizing the fact that the team never knows when the Rover will die but they all know that it will have a major effect on their future. They also realize that the timing of discoveries is unpredictable and that they are constantly faced with unknowns. The program has utilized a diverse group of scientists that use a wide range of tools to understand and plan Rover’s mission.  It has been, and continues to be, a truly team effort.