Mr. Boswell Goes to Corsica:
Charismatic Authority in the Age of Revolutions 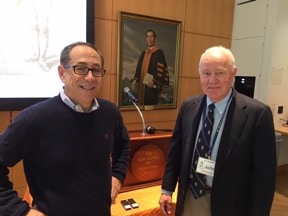 Minutes of the 31st Meeting of the 75th Year

The 31st meeting of the old Guard of Princeton's 75th year was called to order by President Jock McFarlane at 10:15 a.m. in the Convocation Room of the Friend Center. Attending were 105 members and guests. Roland Miller led the invocation. Minutes of the April 26 meeting were read by Richard Bergman.

Claire Jacobus presented the slate of officers and committee chairs for election. All were elected as nominated:

President McFarlane announced that the May 10 and May 17 meetings will be at the Andlinger Center. On May 17 there will be a 75th anniversary party after the lecture, with prosecco and light fare being served.

John Cotton introduced the speaker, David Bell, Sidney and Ruth Lapidus professor of history at Princeton University. Dr. Bell was educated at Harvard and Princeton and serves on the Princeton history faculty. He has written five books and numerous articles in various publications.

Dr. Bell began his talk about James Boswell and the results of Boswell's 1765 tour of Europe, which included Corsica. Boswell set out for Europe to meet some of the greatest men of his time.

He travelled to Corsica to meet Pasquale Paoli, popular leader of the Corsican independence war. Boswell charmed Paoli with his long conversations and tremendous knowledge. Boswell was so taken with the island and Paoli that he wrote a 380 page book: “Account of Corsica.” It included a portrait of Paoli. About that time France bought Corsica from Genoa, so Paoli's enemy changed to one much stronger and better armed.

Boswell's book sold very well in America and was even more popular in England. In 1769 the independence movement was crushed and Paoli moved to London. Because of Boswell's book, Paoli became popular as a modern charismatic figure. His admirers and followers included Napoleon, Bolivar and the already charismatic figure, George Washington.

Washington exemplified charismatic leadership by leading the Continental Army to victory, retiring, then accepting the United States presidency, then retiring again -- rejecting the traditional sequence of becoming a dictator, king or emperor. He thereby established the practice of peaceful change of power. The 18th century cultivated a celebrity culture that is still alive today. There were many chatty rumor-mongering biographies of famous people that revealed their personalities as well as deeds.

Having such a kinglike character, Washington's image proliferated as a potential monarch. Parson Weems’s biography of Washington peered into his private life, but Weems made up a lot of it.

Some Elements of charismatic leadership are:

In the cities, about half of the citizens owned books. Consequently the sales of Boswell's book topped 7,000 copies, which was very large for that period

Charismatic attributes have been institutionalized in the American presidency.