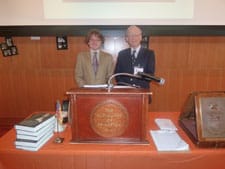 Professor Nigel Smith introduced by Landon Jones
Minutes of the 29th Meeting of the 69th Year
President Bob Verrin called to order the 29th meeting of the 69th year of the Old Guard of Princeton, with 82 members and  guests attending.  Don Edwards led the Invocation.  Dick Scribner read the minutes of the April 27th meeting. The guests were: John Fleming, introduced by his wife Joan Fleming; Thalia Deneen, wife of Jim Deneen; John Bing, guest of Carmen Catanese; and Toby Tuckman, guest of Marge d’Amico.

Landon Jones introduced the speaker, Nigel Smith, Professor of Ancient and Modern Literature at Princeton University, author of many scholarly books, most recently a biography of Andrew Marvell, the 17th-century English poet and politician, entitled Andrew Marvell: The Chameleon.

Professor Smith began by showing a woodcut from the first modern edition of the poet’s work, published in 1776 as a Whig-inspired pro-American project. The illustration depicts three figures waving goodbye to a departing ship, which is Liberty, leaving for America: two of the figures are John Milton and his friend Andrew Marvell.

Marvell wrote little poetry as compared with some of his contemporaries, and was known primarily as a politician, for twenty years a Member of Parliament for Hull, his home-town, but also a spy, an intelligence officer, and a conspirator (in other words, a normal 17th-century politician). His reputation as a poet was given a great boost when, in 1921, T.S. Eliot wrote an influential essay on his work. Eliot called Marvell “a superb lyric poet” who brought the best of the European Renaissance into English poetry.  Eliot’s essay resulted in greater attention to Marvell’s poetry, but not to his life and politics, and only recently has the life attracted serious scholarly attention. Professor Smith wanted, in his biography, to reconcile the two sides of Marvell’s life.

None of the poetry was published during Marvell’s lifetime; it circulated in manuscript, handwritten copies, none of which has survived.  After his death in 1678, friends of his brought out an edition in 1681, entitled Miscellaneous Poems. The volume included the familiar lyric, “To His Coy Mistress,” with its famous opening couplet, “Had we but world enough and time,/ This coyness, lady, were no crime;” and, later in the poem, “But at my back I always hear/ Time’s winged chariot hurrying near.” Another poem, “The Garden,” written about 1650 at Nun Appleton, an estate of Sir Thomas Fairfax, where Marvell served as tutor to Fairfax’s daughter, shows the poet as philosopher, inspired by the peace and beauty of the garden to contemplate the nature of the mind, and to think “a green thought in a green shade.” Three poems were dedicated to Oliver Cromwell (and razored out in almost all copies), one of which is “An Horatian Ode: Upon Cromwell’s Return from Ireland.” Generally considered one of the finest English political poems, it is an analysis of power and authority, clearly based on Marvell’s reading of Machiavelli.  Poems such as this ode were written to curry favor, a usual practice in a culture which used translations of Seneca as a test of competence for government positions.

Marvell wrote poetry in Latin also, as well as satires in both poetry and prose, and early on, some Royalist poems. Often he wrote in the cause of religious toleration, which, Professor Smith emphasized, was characteristic of the region of Hull, a firmly Protestant but tolerant area. The young Marvell also learned respect for freedom of thought from his father, an independent-minded Anglican cleric, whose early death in 1641 nearly coincided with Marvel’s expulsion from Trinity College and led to his spending several years on the Continent improving his education, perhaps in hope of an eventual diplomatic career.

Professor Smith thinks that he was not, however, a natural diplomat. Smith summarized two diplomatic missions that Marvell undertook with the Earl of Carlisle, one in the early 1660s to the Dutch Republic to round up former republicans and regicides, and one in 1653, to Russia, to attempt to win back trading privileges that England had lost after the execution of the king. This mission failed, at least partly because the czar did not like the adjectives that Marvell had chosen to describe him.

In fact Marvell’s prodigious talents did not fit well with the positions in which he found himself, Professor Smith said, pointing out that as a Member of Parliament he did not participate in debate because he was a poor public speaker. His real talent lay in working behind the scenes. He was a man who loved solitude, living alone and hiding behind his landlady, feeling a disconnection with the world that is both arresting and disturbing.  His remoteness fostered his sense of the need for tolerance and freedom of thought, and for Professor Smith the greatness of his poetry lies in his triumph over his own disappointments and limitations.