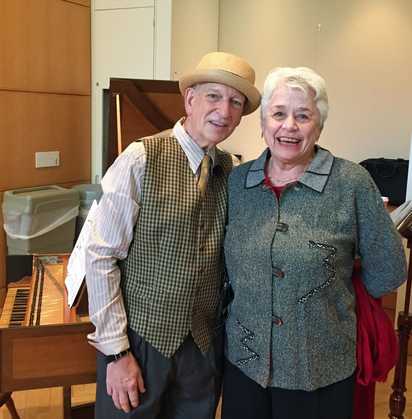 Chris Coucill read the minutes of the previous week’s meeting;

President Leach put out a call for IT-savvy volunteers and Claire Jacobus offered a roster of nominees for next year’s Old Guard officers and committee chairs.

The speaker was the lively and engaging John Burkhalter, a scholar and performer of early American music. Accompanying him was the musician and  composer Donovan Klotzbeacher. While most Old Guard speakers arrive bearing a laptop, these gentlemen entered the Friend Center carrying recorders and a harpsichord.

So music ruled the fleeting hour on May 4. Burkhalter stated that Francis Hopkinson, a signer of the Declaration of Independence from New Jersey, lived a musical life as significant as his political life. He noted Hopkinson’s friendship with Thomas Jefferson and said that for both men music provided delightful recreation.

In the 18th century, music was a genteel accomplishment, though instruments were gender specific. Gentlemen could play keyboard and stringed instruments, women keyboard instruments and the English guitar. He noted that a Charles Willson Peale portrait shows Julia Stockton Rush, born in Morven, holding an English guitar.

Hopkinson wrote the first art songs in America, Burkhalter said. He wrote songs, hymns and psalms, played the organ at Christ Church in Philadelphia and performed publicly with concert ensembles. It is the music of Hopkinson’s time, rather than Hopkinson’s own compositions, that Burkhalter discussed and performed.

As a student at the College of Philadelphia, Hopkinson staged a performance of the British composer Thomas Arne’s “Masque of Alfred.” The first piece we heard was a gavotte from that work.

London theatricals appeared here within one or two seasons. For instance, Arne’s “Thomas and Sally, or the Sailor’s Return,” from which Burkhalter performed “The Spinning Song.” After applause rang once again through the Convocation Room, he requested that we might “greet the performers with approbation” at the conclusion of the presentation.

They presented a piece from “Love in a Village,” whose overture was by German composer Charles Abel.

Next came two pieces from John Gay’s “Beggar’s Opera,” which takes place in Newgate Prison, some of the words to which were considered by the gentry to be “extremely rude.” Fortunately we heard only instrumental versions.

Burkhalter played a melody found in Princeton’s Robert H. Taylor collection, which has the only known copy of an arrangement for the alto English flute – the instrument Burkhalter was playing.

Then Corelli’s Concerto No. 10, in an arrangement found in Hopkinson’s own music collection; a dance from “Queen Mab,” by the English composer Charles Dibdin; a march; and a piece from Handel’s opera “Alcina.”

Finally, “Pastorale” by the Italian composer Dominico Zipoli, and “Air Champetre” by the French composer Claude Balbastre, who taught Jefferson’s daughters when Jefferson was minister to France.

Burkhalter felt that those last pieces somehow united the spirits of Hopkinson and Jefferson, as the two often corresponded on issues related to music – including, he said, “the tuning and quilling of harpsichords.”

At the conclusion of the presentation, the members of the Old Guard did, indeed, greet Burkhalter and Klotzbaecher with great approbation.