May 6, 2020
The Vision of Alchemy:
Depicting Chemical Change in Medieval England 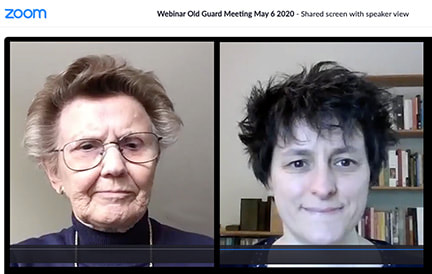 Minutes of the 24th Meeting of the 78th Year

President Julia Coale called the meeting to order at 10:15 a.m. Attending the meeting via Zoom were 105 members. Julia Coale read the minutes of the April 29, 2020, meeting.

This was the official Annual Meeting for the purpose of electing officers and committee chairs, as well as for a vote on new candidates for membership.

Shortly after Stephen Schreiber and several technically conversant members coaxed the Zoom application into readiness, Nancy Beck began her introduction of our speaker. Professor Jennifer Rampling, Ph.D., studied History at the University of London and completed her doctorate in Renaissance/Medieval Europe at Cambridge University. She joined the faculty of Princeton University in 2013. Her forthcoming book, The Experimental Fire: Inventing English Alchemy, 1300-1700, will be published by the University of Chicago Press in fall 2020.

Since time immemorial people have tried to link elements of earth, sky, and unseen forces surrounding us to situations we face, especially sickness and death, and the pursuit of riches. We continue even today as we search via highly technical instruments for an understanding of a virus that is killing us, an earthbound substance, so scary that we are willing to bear almost any kind of inconvenience that will wall us off from this killer.

Professor Rampling recalled the researchers of medieval times as they sought earth-bound links between life, death, and riches. As opposed to astrologers who pursued like goals by reading the actions of the heavens, the alchemists sought to discover properties of earthly materials, elements and mixtures, combinations and incantations, which would achieve their aims. One of the signal quests of these alchemists was the Philosopher's Stone, a substance that would turn base metal into gold, but these were mainly magicians who would either turn lead and other metals into gold or mix various concoctions to be sold as life-giving nostrums.

Our speaker pointed out that serious alchemists have left countless images of their studies and experiments in the workings of nature. These images include everything from vases and dishes to intricate glass creations used in mixing and distilling chemical substances, woodcuts, paintings, formulas written on scrolls, and drawings sublimely complicated as well as relatively simple. One 16th century scroll depicts the beautifully painted Serpent of Araby in pursuit of the Elixir of Life. Another series depicts a royal couple who could not conceive until they were blessed by a mitred abbot whose stole covers their hands.

One drawing shows the power of mercury to penetrate other substances; this particular drawing shows three characters, a mermaid and a young couple. The mermaid has a long pipe-like instrument, with mercury on a knife at the end, which she touches to the chest of the man, under the assumption that the love of the young woman would penetrate through his chest to his heart.

Many of the images include a combination of earthly substance with a spiritual element. Not only the stole of the abbot conveying a blessing to the crossed hands of the newlyweds, but also, in one 16th century, highly complicated drawing showing a serpent climbing a tree, with its tail still wound inside the body of a newborn (supposedly depicting the combination of good and evil), while numerous clergy, royals, and others populate the sides of the action, there is a distinct acknowledgement of the spiritual combat that befalls our lives.

In answer to one question, Professor Rampling allowed that two of the famous images are in the Princeton University Library's collection, She also announced that there will be an exhibit, "Through a Glass Darkly: Alchemy and the Ripley Scroll 1400-1700," to open in spring 2021 at Firestone Library.