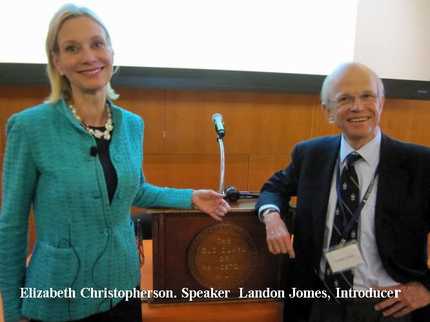 Minutes of the 29th Meeting of the 71st Year
President Ruth Miller opened the meeting with 85 in attendance.  Julia Coale led the invocation, and Charles Rojer delivered the minutes from the prior meeting. Guests introduced were:

Lanny Jones introduced Elizabeth Good Christopherson, president and CEO of  Rita Allen Foundation since 2009.  Prior to that she served as the first female director of the New Jersey Public Broadcasting network and as a Director of the Washington based Public Broadcasting Network following her work as Chair of the New Jersey Council for the Arts.  Having grown up in Summit, NJ she graduated from Wellesley College with a major in Chinese language, history, and society, and she has attended advanced management programs at the Business School and Kennedy School at Harvard and at the Kellogg School at Northwestern. Her honors include the 2007 International Women’s Award:  Women Who Make a Difference. Rita Allen Foundation is on the third floor of the Tudor building housing Hamilton Jewelers at the corner of Nassau and Witherspoon Streets in Princeton.

The talk was entitled INVESTING IN TRANSFORMATIVE IDEAS.  Ms. Christopherson views the primary role of philanthropy to be not giving money but understanding problems and how to find and empower extraordinarily effective problem solvers. During her tenure the New Jersey Arts Council focused on how to allocate public funding among a number of opera companies and also helped organizations like McCarter Theater improve performance through better business practices such as strategic planning and budgeting. The Council made significant grants to the best organizations as judged by peer review rather than spread grants widely over many organizations.

When she moved to NJN she again focused on planning, incorporating outside expertise: engaging corporate and civic leaders and active volunteers to help decide how to enhance and expand New Jersey’s broadcasting “voice.” In cooperation with Sarnoff and other public and private entities NJN helped pioneer the conversion to digital from analog broadcasting, as mandated by the Federal government. NJN parlayed a borrowed half-million dollar server into collateral for one of the seven Federal grants allocated among 170 broadcast licensees for the conversion to digital and for positioning the networks to provide communications in emergencies.

These experiences led our speaker to think more generally about how to create change for public good.  In 2009 she moved to Rita Allen Foundation to continue this thinking and try to apply it in the field of philanthropy.

The Foundation was established in 1953 while Ms. Allen, a theatrical producer, was married to investment banker Charles Allen.  Rita’s subsequent marriage to Milton Cassel, a musician, followed by her death and Cassel’s later remarriage, led to the last Mrs. Cassel’s efforts to expunge from the record as much as possible about Rita Allen Foundation with the result that despite its $20 million corpus at the time, which has increased to $160 million today, the Foundation is not widely known.

In 1976 the Foundation set out to use its money to undertake risky but promising steps to fulfill unmet social needs.  This resulted in grants to fund the work of Rita Allen Scholars, extraordinarily gifted PhD’s in their early careers before they settle in at major research institutions. There were numerous successes, such as Sam Wang, a Princeton University neuroscientist who spoke to the Old Guard recently about his sideline interest in political polling in which he is a renowned leader.  He serves as a Trustee of the Foundation today. The Scholars are selected from those nominated as best in their class by a handful of the top American research universities. Their funding, paid out over a five-year period at the rate of $100,000 per year, goes to their university rather than directly to the individual, and therefore is not taxable income. The funds are used to finance the scholar’s laboratory and other research expenses.

With a distinguished Board comprising a former head of the Robert Wood Johnson Foundation, former Governor Tom Kean, Mosey Gates, Lanny Jones, Sam Wang and others, the Foundation tries to invest in Transformative Ideas at their earliest stages, where the risks and the potential rewards to society are the highest.  Areas of interest include science and social innovation, the latter growing out of the belief that a declining sense of community threatens to weaken our democracy.  Symptomatic of and contributing to the decline are: 1) the economic distress of newspapers, especially the local weeklies that keep people informed about and interested in their communities; 2) the economic challenges to local broadcast media outlets; 3) the declining percentage of eligible voters who actually cast ballots; and 4) the small number of people who engage in civic activities.

The Foundation patterns itself after those of Rockefeller and Carnegie, which seek the causes of social problems and act to counter these causes rather than merely to deal with their symptoms. This requires deep research into today’s problems and a forecast of what societal challenges the future holds, the latter justifying the idea of a foundation as a surviving force.  In particular, a foundation should take some risks that government and marketplace will normally decline, so as to get a head start in coping with longer-term problems.

Rita Allen Foundation does not follow the approach of many other foundations that lack a strategic sense, react to requests, make many small grants, and do little assessing of results thereby missing out on important learning opportunities. Rather, Rita Allen seeks out problem areas proactively, researches who is already active there and what they are doing, employs in the process outside individual and institutional expertise concomitantly creating important feedback loops, and, finally, it reaches out to find the most promising problem solvers to be given the Foundation’s support.  Rita Allen Foundation sees itself as a laboratory for change, embracing societal complexity and seeking outside input on how to use new technology in new ways to solve problems, in the process taking risks like a VC firm on a win some/lose some basis. The process comprises THINK, RISK, TRANSFORM, REPEAT.

As an example of their support of non-profit news organizations, the Foundation funded the Center for Public Integrity, which measures corruption and efforts to combat it in all 50 states and has issued a report card on each. New Jersey got a B+ despite our well- known corruption because of the extent of our efforts to fight it. South Carolina got a shockingly bad grade and has responded aggressively to improve the situation. (Incidentally, the NY Times on Sunday, May 12 carried an article on corruption in the states, which referred to the Center for Public Integrity and Gordon Witkin, its Managing Editor.)

Other examples of the Foundation’s work include funding local volunteer communicators of civic news through print and by cellphone; public health and sanitation improvement in Africa; reducing violence in inner-city Chicago through cell phone communication in pre-selected areas at greatest risk.

In response to questions Elizabeth made the following points:
The greatest “enemy” in her line of work is time, because thinking takes time.

Grants ranging in size from $100,000 to $500,000 per year, are sustained over a two-year or longer period, and are often matched by others such as the Ford Foundation, the Kellogg Foundation, and Google.

There are about 800 charitable foundations in the Princeton area.

The Foundation is just beginning to attack the issue of who owns the intellectual property rights to the solutions developed by its grantees.

New Jersey Network suffered from the lack of a powerful public champion, so it lurched repeatedly in response to the differing political views of each incoming new governor.
Finally, and regrettably, the decision was made to, in effect, outsource New Jersey’s media input to NY and PA.