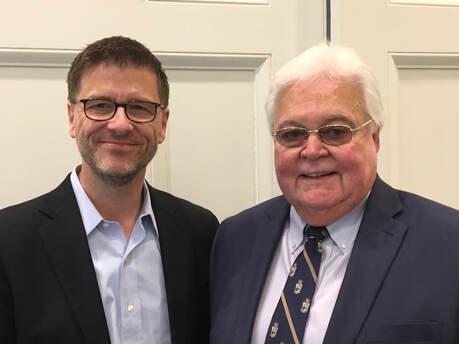 Minutes of the 30th Meeting of the 77th Year

President Julia Coale called the 30th meeting of the 77th year of the Old Guard to order at 10:15 a.m. on May 8, 2019 at the Nassau Presbyterian Church. Joan Fleming led the invocation and Russ White read the minutes of the May 1, 2019 meeting. Three members introduced guests: John Burton, Janet Burton; Diana Crane, Giles Crane; and Ann Damsgaard, Lee Gladden.

Henry Von Kohorn, Nominating Committee Chair, announced the slate of officers for 2019-2020 and the group was elected unanimously. Membership Committee Chair Robert Altman announced the names of seven applicants whose admission to membership will be voted upon at the next meeting. One hundred thirty members and guests attended the meeting.

George Bustin, filling in for Lanny Jones, introduced Joe Stephens as the speaker. Professor Stephens, whose topic was “Fighting Fake News,” was an investigative reporter for several newspapers for 35 years ending with 18 years with the Washington Post. He earned numerous honors and awards over the years including three Pulitzer nominations. He came to Princeton University in 2014 and addressed the Old Guard in September of that year speaking on the topic “Confessions of an Investigative Journalist.” His initial position at the University was temporary but this past fall - and he suggested that the timing might not have been a coincidence - the faculty voted to make journalism a “program.” Professor Stephens is the full-time Director of the Program in Journalism and the Ferris Professor of Journalism in Residence.

He has taken groups of students to Greece each of the last four years to do real international reporting. He livened the talk by showing pictures and a video of the group reporting on a riot in Lesbos related to the influx of Syrian refugees.

Professor Stephens said now there is more fake news and it has changed from the past. Our phones enable readers or consumers of information to see things on their screens but it may be difficult or impossible to determine whether they are real or fake. Most journalism today is not ink and paper but something seen on a screen, most often through social media, and not the New York Times or other established journalistic source.

He said he assigns his students at the start of the semester to describe a story they have read. He then asks them about the sources of the stories. Sometimes they do not know and often the source is Snapchat. This, he said, is a problem.

He laid out what he identified as the three basic materials of journalism. The first involves sources or humans. Humans can lie, spin, be fallible, etc. Therefore, the story should identify the human source and indicate any conflicts of interest and reasons why the person can or cannot be trusted. While the source generally should be named, he recognized that there are circumstances when, for good reasons, this cannot be done. Such reasons, however, should be explained. This element of journalism should include an account of how the story was verified. This may well involve speaking to others. All of this should be as transparent as possible. If it is not, the reader should be skeptical, although the lack of transparency does not necessarily mean the story is not accurate.

The second element is direct observation. Can the reporter say, “I was at the riot” or “ I saw the damage from the car bomb” or “I saw the refugees land on the shore” or “I saw the bullet holes in the hospital”? This kind of evidence is generally reliable.

Third, there is documentary evidence. This is the least often used but it may be the most reliable. Of course documents can be forged or doctored but generally they were created before the event and for a different purpose so are likely to be authentic. Many of the best reported stories rely on documents. He cited the revelations of Edward Snowden regarding spying. These were credible not because Snowden claimed the government was spying on Americans but because he had a thumb drive that documented that spying.

Professor Stephens said if all three elements are included, the story is likely to be reliable. It is critically important to pay attention to sources, he emphasized.

In the question and answer period, he acknowledged that there is no easy way to get the general populace to be aware of the elements of journalism he identified. Often people want and expect to be entertained and that is not journalism. Some people now get their news from comedy shows.

An historian noted that forgery goes back centuries so she wondered how documentary evidence should be treated. Professor Stephens agreed that the authenticity of documents had to be confirmed.

Professor Stephens asserted that there is too much opinion in journalism. Papers used to clearly delineate between fact and opinion but that is less and less true. Often opinion is mixed in with straight journalism, especially on social media. To help students recognize the difference, he instructs them not to use the first person as a means of avoiding opinion. They often find this very difficult.

A questioner asked about an article in which the author concluded that President Trump had changed the New York Times forever. While Professor Stephens said he was not familiar with that article, he said that the Trump era did pose an existential threat to journalism. If something is not true, do you call it a “lie”? He noted that the New York Times has been using that word more often while the Washington Post has been using it only sparingly and the Wall Street Journal not at all. It is a difficult word because it implies that the speaker knew the truth and was intentionally misleading. There are no journalistic guidelines for the use of this word.

Professor Stephens concluded by reciting approvingly the Scripps motto: “Give light and the people will find their own way.”

President Coale thanked our speaker and adjourned the meeting at 11:30 a.m.