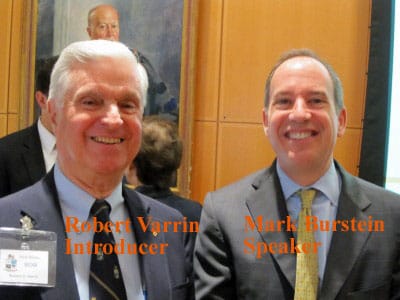 Minutes of the 32nd Meeting of the 70th Year
President Robert Varrin welcomed everyone to the Friend Center for the 32nd Meeting of the 70th year of the Old Guard of Princeton at 10:15 AM. The Invocation was led by Tom Fulmer. There were two guests on hand:  Richard Bergman introduced his wife, Vicky Bergman; and Ruth Miller introduced her husband, Bernie Miller. In all, there were 92 members of the Old Guard in attendance.

Julia Coale read the Minutes from the meeting of May 2nd which featured a talk by Atul Kohli, the David K.E. Bruce Professor of International Affairs at Princeton, entitled “The Success of India’s Democracy.”

President Varrin called upon Jack Reilly, Chair of the Membership Committee, to give a report on the nominees for election to membership in the Old Guard of Princeton. In all, there were fourteen nominees – Patrick Bernuth, Richard Eiger, Charles Gear, Donald Healy, James Hester, Sarah Hollister, Richard Leone, Irwin Litt, Beryl McMillan, Michael Roberts, William Strong, Ralph Widner, Joseph Wisnovsky and Mary Wisnovsky. A motion was made – and seconded – to approve the slate of nominees as presented and the membership voted to welcome these new members to the organization. They are all to be invited to attend the next meeting on Wednesday, May 16th, at which they will each be given an OG nametag and a Member Handbook, and Sponsors were reminded that all new members should be urged to come to the meeting with checks for $100.00 (Initiation) and $50.00 (annual dues), payable to the Old Guard of Princeton.

President Varrin reminded everyone that next week’s meeting on Wednesday, May 16th, will be held at the Carl Fields Center and that there will be a hospitality hour for new members and guests. Our guest speaker will be Carolyn Williams, Professor of English and Chair of the Department of English at Rutgers University, who will give a talk entitled “Gilbert & Sullivan: Gender, Genre, Parody.”

President Varrin also reminded everyone that 8” x 10” and 8” x 14” color photographs of the Old Guard group may be ordered on-line or by giving a check, payable to the Old Guard of Princeton, for $10.00 or $20.00, respectively, to Bruno Walmsley or Treasurer Guy Dean at the next meeting. Copies of the photographs are expected to be available for member pick-up at the meetings on May 16th and May 23rd and arrangements can be made for the photos to be delivered to you by Jotham Johnson after May 23rd.

President Varrin then proceeded to introduce today’s speaker, Mark Burstein, the Executive Vice President at Princeton University, whose talk was entitled “The Evolving Princeton Campus.” A graduate of Vassar College with an MBA degree from the University of Pennsylvania’s Wharton School of Business, Mr. Burstein came to Princeton in 2004 after five years as Vice President for Facilities Management at Columbia University. As Princeton’s EVP, he works closely with President Shirley Tilghman, the Trustees and the senior leadership and leads efforts to modernize the University’s operations, to reduce expenses where possible, to enhance campus infrastructure, and to develop and implement Princeton’s mid- and long-term planning strategies. In this capacity, he has direct oversight of Human Resources, Facilities, Campus Life, Public Safety, University Services and the University’s Audit and Compliance initiatives. Mr. Burstein began his remarks by thanking everyone for their association with the Old Guard group and their evident interest in the well-being of the community. He recounted how his three immediate predecessors as EVP had called him within days of his appointment to wish him well and to offer their assistance, and that he has always felt especially welcome at Princeton.

Princeton’s current Campus Development Planning effort was launched in 2007 and, to date, has included 70 projects totaling 2.1 million square feet of new construction, 850,000 square feet of renovations, and 150,000 square feet in new administrative and support space off-campus. In response to the rhetorical question – Why So Much Growth? – he replied that scientific endeavor and research is more complicated these days and the campus is constrained by limited space. One solution is to move more and more of the non-academically-related administrative offices off campus and to concentrate the teaching and research activities on the campus as we know it. He also called attention to the fact that the campus now stretches southward from a ridge at the northern boundary – Nassau Street – downhill to Lake Carnegie and observed that the issue of storm water management is now a major environmental priority.

There are, he said, five Guiding Principles governing campus planning deliberations:
As examples, he cited the construction of Sherrerd Hall, built with a “green roof” to help moderate heating and cooling costs and address the issue of storm water runoff; Butler College, which has five new residence halls with “green roofs”; Roberts Stadium, for men’s and women’s soccer; the renovation of New South Building to house some of the offices and the dance studios of the Lewis Center for the Arts; new Dining Facilities in five of the six residential colleges to better accommodate a 30% increase in student demand; the construction of the new High Performance Computing Research Center (to provide increased computational capacity) on the Forrestal campus; and the completion of Sherrerd Field at the Class of ’52 Stadium.

In response to an earlier question, he addressed the matter of traffic patterns in today’s Princeton and what might be done to ameliorate traffic flow. He alluded to the fact that for over 200 years the main entrances to the campus were off Nassau Street, known historically, from 1765 on as the “King’s Highway”, but that the major traffic flow today comes from Route 1, principally up Washington Road and Alexander Street. In particular, the approach to the campus – and the community – has been changed dramatically in the last five years with the construction of Streicker Bridge over Washington Road, the completion of the Frick Chemistry Lab and the near-completion of the new Psychology/Neuroscience building, as well as special efforts very recently to restore what he referred to as the “woodland fringe” between Washington Road and the Frick Lab.

Over the next five years, he predicted the University will proceed to……

Throughout his remarks, and at his invitation, there were numerous additional inquiries having to do with……

After a very informative talk, followed by a lively Q&A, President Varrin thanked Mr. Burstein for addressing the Old Guard of Princeton and adjourned the meeting at 11:35 AM.