New Jersey’s Role in World War I:
Sabotage Target and Key State in the War Effort 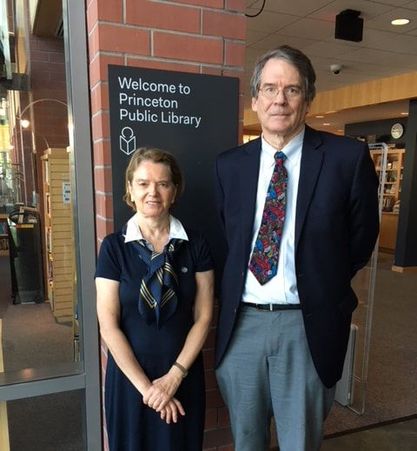 President Jock McFarlane opened the 30th meeting of the 76th year of the Old Guard at 10:15 a.m. in the Community Room at the Princeton Public Library. The invocation was led by Julia Coale and the minutes of the last meeting were read by Larry Hans.
Arthur Eschenlauer introduced his guest, Steven Schlosstein; Marge D’Amico introduced Ken Sharp; John Kelsey introduced Neal Polachek; and BFG Graham introduced Gayle Wurst.

Robert Altman conducted the election of 10 candidates, who were voted unanimously for membership and will be introduced and inducted at the next meeting, May 16.

Miquelon Weyeneth introduced our speaker, James Hockenberry, a CPA and the author of the World War I Intrigue Trilogy. A native of Bronxville, N.Y., he graduated from Lafayette College and received a master’s degree from Columbia University. Although his career is in the field of e­­­­­­­­conomics, his interest in history, particularly of World War I, blossomed with the publication of two books so far of a planned trilogy: “Over Here” and “So Beware.”

Mr. Hockenberry's remarks centered on New Jersey’s role in the 1914-1918 conflict.
Most people think of the Jersey Shore as a long stretch of sandy beaches between  Cape May and Sandy Hook with a ferry boat at the south end and a river called the  Arthur Kill between the turnpike and Staten Island, with the Verrazano-Narrows Bridge  dangling somewhere off Raritan Bay to the north.

After an introduction by Miquelon Weyeneth, James Hockenberry, in his animated, fact-filled presentation took us to a place in our state wetted by the salt of the Atlantic Ocean, relatively unknown and unthought about, but the site of one of the most horrendous manmade explosions in our nation’s history, caused by agents of the German government in an effort to deter American entry into the Great War, which had begun two years before, in August 1914.

At 2:08 on the morning of July 30, 1916, saboteurs set fires on a barge tied to a pier in New York Harbor, off Black Tom Rock, Jersey City, The barge was laden with two million pounds of ammunition, including 200,000 pounds of dynamite, scheduled for shipment to Russia. The explosion registered 5.5 on the Richter scale, was heard in Philadelphia, destroyed dockside buildings, blew out windows for miles around, and caused damage to the Statue of Liberty that is still visible today. The death toll was modest with six known, but probably many uncounted victims.

Mr. Hockenberry used that front page disaster as a lynchpin from which to hang several theories about the war itself and America’s belated, but expected, entry finally, on April 2, 1917.

He expressed a growing consensus that both world wars were really one major conflict similar in duration to the Thirty Years’ War, and then proceeded with his theme: President Wilson had refused to be goaded into armed conflict, but the American refusal to interfere with, or violate the British blockade of German ports in 1914 provided Germany with strong evidence that we would not be friendly to their military ambitions; thus they engaged in a series of efforts to dissuade our people from supporting the Allied cause.

Their leaders were convinced that America would never be able to tool up sufficiently to make a difference late in the war, nor to deliver trained soldiers to the battlefronts of Europe. Their strategic assumptions failed to account for three things:

First, the ability of American industry, particularly in New Jersey, to ramp up production of war materiel quickly. Companies such as DuPont, J&J, Hercules an Camden’s New York Shipbuilders confounded that assumption.

Second, the ability of the United States to increase the size of our military forces from 200,000 to two million men in arms within months vastly exceeded Axis projections.

And last, the combined growth of our naval forces supplemented by the impoundment of Axis shipping, turned the Atlantic Ocean into an eastbound military highway. The combination of terrible force, terrible violence and the deaths of 20 million mostly innocent people, brought Germany and its minions to surrender and agree to the Treaty of Versailles, which President Wilson refused to sign. But that is a story for another day.